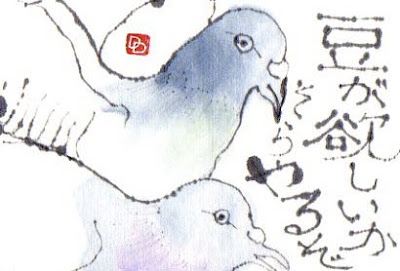 February 3 is when Japan celebrates Setsubun (sometimes called Bean-scattering festival or Bean-Throwing Ceremony). Although the word setsubun means "seasonal division," and there are more than one of those throughout the year, when we talk about the Setsubun festival, we mean the spring setsubun, which is celebrated yearly on February 3. Chinese cultures celebrate this day as New Year's Day according to the lunar calendar, and even in Japan, Spring Setsubun can be considered a sort of New Year-related festival.

On Setsubun, people go through certain rituals that are meant to drive away the bad luck left over from the previous year, and invite in the good luck. The main ritual is called Mame-maki (bean scattering). Traditionally, we throw roasted soybeans out through the doorway or at someone wearing a horned Oni (ogre) mask, all the while yelling "Oni wa soto, fuku wa uchi!" (Out with the ogre/bad luck, In with the good luck). Then, for further luck, each person eats the same number of beans as the number of years they've lived, plus one extra bean.

I do not actively participate in this tradition, but I am rather fond of it, because, like other Japanese festivals and holidays, it keeps me aware of the rhythm of the seasons and assures me, even during the coldest part of our Hokkaido winter, that spring is approaching.... however slowly.

Celebrating seasonal changes is fundamental to Etegami art. So, naturally, I was compelled to mark Setsubun with an etegami (or two, or three, or...). In the two samples posted here, I chose to refer to Setsubun a bit obliquely, and had some fun with word-play. The first etegami quotes a line from a children's song about feeding mame (beans/peas) to pigeons. The second etegami depicts roasted soybeans in a small wooden measuring box, a widely recognized prop for the bean-scattering ceremony. The accompanying words play with the similarity between the word for "good luck" and the word for "good news/gospel." They translate to "Out with the good news! In with the good news! Scatter the good news!"
Posted by dosankodebbie at 5:55 PM 8 comments: 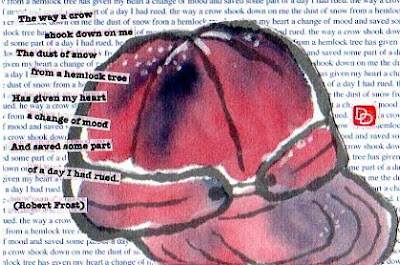 Which do you prefer?
Posted by dosankodebbie at 2:12 AM 3 comments: 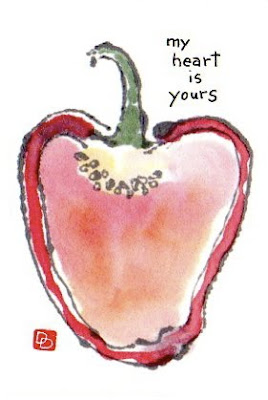 Valentine's Day has been on my mind, so my interpretation of the new IF topic is pretty straightforward. The heart-shape inside a sweet red bell pepper. Dedicated to my husband of 34 years.
Posted by dosankodebbie at 4:21 PM 13 comments: 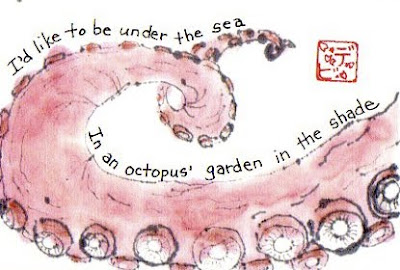 Inspired by the Beatles’ song “Octopus’s Garden,” written by Ringo Starr and included in the Beatles’ 1969 album “Abbey Road.”
Posted by dosankodebbie at 2:53 PM 7 comments: 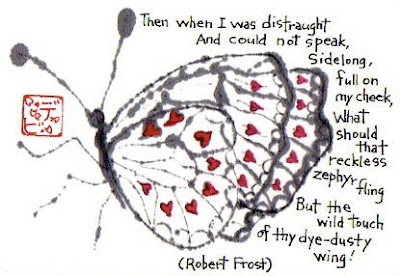 This week's IF topic made me think of the "dust" from a butterfly wing, and then I found a poem by Robert Frost called My Butterfly that I'd never heard of before. It's actually just a little bit sad, but I loved the part I quoted on this etegami. I looked at lots of butterfly photos and found one that looked like it was patterned with little hearts. Really! Except that they were black, not red.
Posted by dosankodebbie at 11:00 PM 17 comments: 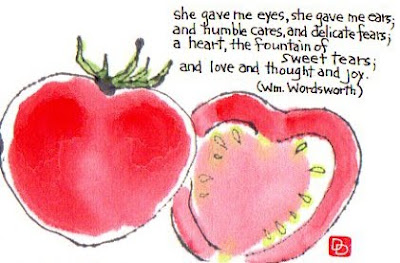 Many fruits and vegetables, when cut in half, display an inner heart-shape. This has always fascinated me. A bag of small tomatoes was delivered from my food co-op yesterday, so I painted them as Valentine etegami. Romantic love is well and good. I'm all for it. But that is not all there is to love. The etegami posted above is accompanied by a quote from The Sparrow's Nest, a poem by William Wordsworth (1770-1850), and speaks of family love between brother and sister.

Let us Consider refers to another kind of love expressed in a community of brothers and sisters in the faith, while Love is Not Blind, and Love is Not All were inspired by two poems by Edna St.Vincent Millay (1892-1950), about romantic love that has
matured beyond mere infatuation.

Posted by dosankodebbie at 5:13 PM 7 comments:

My first illustrated recipe for the year. Forty-nine recipes to go...
Posted by dosankodebbie at 11:44 PM 9 comments: 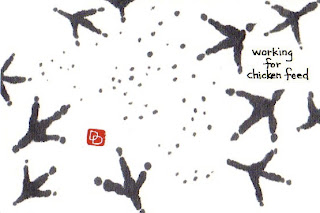 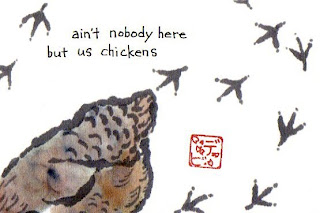 Posted by dosankodebbie at 6:00 PM 14 comments: 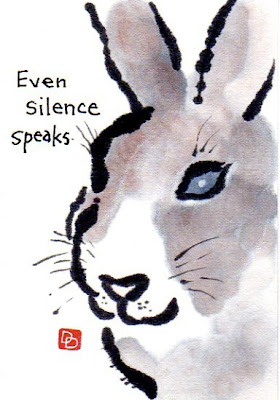 This is one of the many etegami I painted as a New Year's card for 2011 Year of the Rabbit. The words accompanying this solemn-faced rabbit are a Hausa proverb. 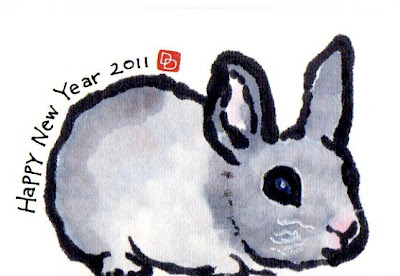 Here's one for people who prefer cute bunnies. 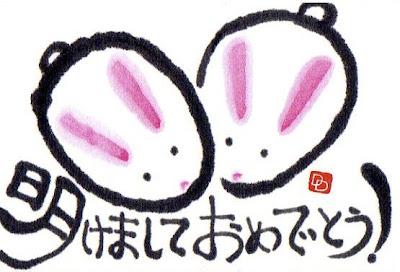 The inspiration for these simple bunnies comes from the bunny-shaped confections that become popular in Japan during rabbit years. I'm planning to post a recipe for these usagi manju later this month on my Wagashi blog. 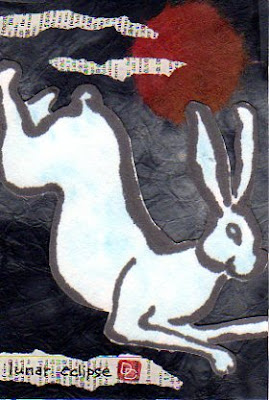 I also did a bunch of etegami collages. This one was inspired by the lunar eclipse. Whereas Americans refer to "the man in the moon," in Japan, we see a rabbit pounding sticky rice with a mallet. I imagined the over-worked rabbit taking the eclipse as an opportunity to take a brief break. I thought of hanging a sign on the darkened moon with the words "gone fishing," or "out to lunch," but in the end I just labeled it "lunar eclipse" to limit clutter.

Here are some of the other collages I made by gluing etegami rabbits to backgrounds of colored washi, a page from an antique book of singing poems, or pieces torn from an old Japanese-English dictionary. Due to the rabbit-in-the-moon tradition, rabbits and the moon make a natural combination in Japanese art.
Posted by dosankodebbie at 4:54 PM 8 comments: