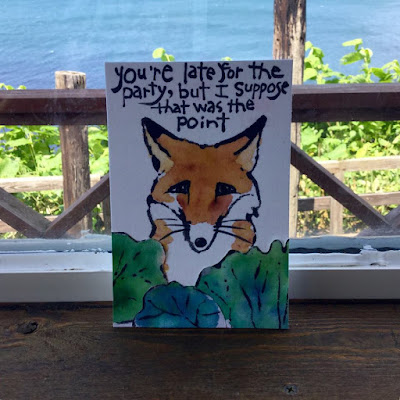 As soon as the Etegami workshop was over for the day, and I was the only one left in the house, a fox strolled along the top of the fence just outside my studio window. #Atsuta series.

Posted by dosankodebbie at 2:26 PM 3 comments:

I found these sand dollars at a souvenir shop on an island off America's east coast more than twenty-five years ago. That was before I became bitten by the etegami bug, and at the time, I didn't really know what I wanted them for. But when they reappeared during a recent decluttering frenzy, it was as plain as plain can be that they (especially the huge ones) were canvases begging to be painted on. Part of me resisted adding something to an already exquisite product of nature, but I hoped that etegami-style embellishment would suit this particular canvas-- if applied with a light hand.

The porosity of the shell made it a challenging surface for my etegami paints, but the results did not disappoint me.

I made the interesting discovery that none of my Hokkaido-based etegami colleagues had ever seen or heard of a sand dollar before. They are related to the spherical sea urchins, a lip-smacking delicacy that Hokkaido has in abundance, but these flat relatives are apparently unknown in northern Japan.

So, we searched our nearest seashore for other shells that might work as etegami canvases, and ended up collecting armloads of all kinds of sea shells (mostly chipped or broken), smooth and not-so-smooth stones, and some interesting driftwood. Scallop shells look the most promising, to tell the truth-- big enough to paint on, and flat enough to slip into an envelope. Scallops also happen to be one of the most popular and plentiful products of Hokkaido's sea-farming industry, so there is no shortage of scallop shells. I think I'll ask my local fish market to save me some, and see where that leads. Stay tuned!


Posted by dosankodebbie at 8:51 PM 5 comments: 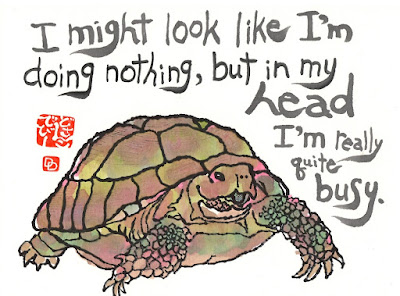 Posted by dosankodebbie at 3:27 PM 3 comments: