Years and years before I became involved in Etegami, I dabbled in the art of Chigiri-e, sometimes described as Japanese Torn Paper Collage Art, or even Painting with Paper. Chigiri-e has a long and venerable history in both Japan and China, and was such an enjoyable hobby, that I once considered pursuing instructor certification. But when I discovered Etegami, I was smitten with its relative lack of rules, its simplicity, the freedom to draw as I pleased from the very beginning (rather than years of imitating the teacher until I had "proven" my mastery of the basic skills), and the fact that it combined words with artwork. It fulfilled something in me that Chigiri-e had not.

Recently, however, I had occasion to look back nostalgically to my Chigiri-e days. I was rummaging through my leftover stock of the fibrous, hand-made paper used in the art, when the idea of a collaboration between Etegami and Chigiri-e occurred to me. One characteristic of Chigiri-e is that the layering of the hand-torn pieces of colored paper creates a three-dimensional effect that is not usually possible with Etegami. I tried several experiments, but the most pleasing results came from using the colored paper with a light hand. I glued bits of the special paper on this drawing of bean pods, which resulted in added thickness, texture, and color where the bean bulges are, without overwhelming the drawing's basic Etegami nature.
Posted by dosankodebbie at 8:47 PM 3 comments:

In late spring, I had a chance to visit the largest stationery supply store in our city. The etegami supplies are sold on the top floor of the building, so I went straight up, barely sparing a glance at the other four floors full of art and office supplies that tempted me at each break in the escalator ride. Naturally, the etegami displays were on the theme of summer. The shochuu mimai greeting cards, that I blogged about in my previous post, were prominently displayed-- as were the tools and card stock for making your own. I also found sets of uchiwa (flat fans) and sensu (folding fans) fitted with blank washi paper for painting your own designs. The miniature flat fan sets, called mame-uchiwa, come with an envelope, so they can be sent through the postal system, and tiny stands so the recipient can display them once they arrive. I prefer the larger, normal-sized fans, because I actually use them to cool myself off, though you can buy tasteful racks to display these as well.

For the two flat fans pictured here, I tore off the worn paper from the plastic frames of two old uchiwa and replaced them with my own drawings. For the one on the left I inked cross-sections of okra and stamped them on the paper randomly in an attempt to represent the Milky Way. This was to commemorate the Tanabata Festival on July 7, a festival associated with the once-a-year meeting of the stars Vega and Altair. The one on the right is a representation of a fresh persimmon, which is a late fall/early winter fruit, and not a suitable motif for a hot-weather item-- It was a dumb choice, but I do so love persimmons! Because I was planning to make bunches of these fans to give away to people, I chose to enlarge and paste photo copies of my original drawings onto the frames. This is cheating. Use the original etegami drawing if possible.

See this post on the KimonoBox blog for more on the tradition of making uchiwa.
Posted by dosankodebbie at 9:24 PM No comments:

etegami and the heat of summer

When the rainy season ends, making way for the intense heat of mid-summer, the Japanese customarily send out a special kind of greeting card called the shochuu mimai to ask after the health of their acquaintances. Like the New Years greeting known as nengajou, it is a postcard, and is sent primarily to friends and family members that one doesn't see very often. Sometimes they are unadorned cards printed with the standard phrase, but more often they depict photographs or drawings of something representing summer-- especially something refreshing, like flowing water, a cool drink, fluttering wind chime, or slice of dewy fruit. The custom of exchanging cards like these at various set times of the year may seem burdensome to some, but I find it smooths socialization with people who have been on my mind but whom I hesitate to contact without an excuse. I've attached some samples of summer greeting cards that I've drawn and sent in the past. A wedge of watermelon. A famous-brand cantaloupe (popular summer gift). A retro pig-shaped ceramic container for coils of mosquito repellent.
Posted by dosankodebbie at 4:49 PM 2 comments:

popov and the goldfish

This is an etegami I submitted to a mail art exhibit at the A.S.Popov Central Museum of Communications in St.Petersburg, Russia. I've been in "fish mode" ever since the etegami I drew for the Sea Exhibition. So I drew a goldfish and applied a new twist. The bubbles coming from the goldfish's mouth were cut out of a magazine and pasted onto the card. There are both Japanese and English words inside the bubbles. These bubbles, combined with the accompanying words, are my attempt to tie the drawing into the theme of the exhibit, which I understand to be the history of communications technology, and a celebration of Popov's 150th anniversary. [Alexander Stepanovich Popov was a Russian physicist who first demonstrated the practical application of electromagnetic (radio) waves.]

The card is, in a sense, a departure from traditional etegami-- a sort of fusion between etegami and collage. It's not something I would have dared to try with etegami until very recently. But my exposure to the wider world of MailArt has been influencing me to test certain boundaries. And I'm having a great time. : )
Posted by dosankodebbie at 7:54 PM 4 comments:

evolving into a global mail artist 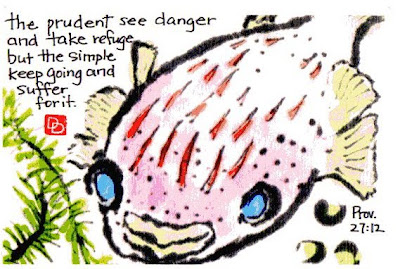 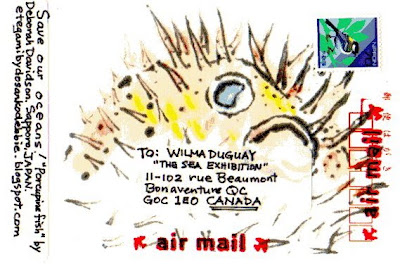 My fairly recent discovery of the global community of mail artists has had an enormous impact on the way I think of etegami. Wikipedia has this definition of mail art: Mail art is art which uses the postal system as a medium. The term mail art can refer to an individual message, the medium through which it is sent, or an artistic genre. Mail art is also known as postal art and is sometimes referred to as Correspondence/Mail Art (CMA).

This may or may not be a sufficient definition of Mail Art. One site I came across further specified that the artwork must be visible to the people handling the mail on its way to being delivered. In other words, it's not Mail Art unless the mailman can see it. Art on postcards, such as etegami, qualifies (as long as it's not enclosed in an envelope), but art on the envelope itself also qualifies.

Though I think of myself as primarily an etegami artist, the astounding variety of styles and approaches towards mail art around the world has been a wonderful stimulus to my work. The images I posted above are of an etegami I am submitting to a mail art exhibit on the theme of The Sea. The drawing on the top is a porcupinefish (harisenbon) in repose. The drawing below it is the same fish in defense mode. This is the first time I've drawn on both sides of the card. Drawing on the side where the address goes is a little tricky, but it was a cool experiment, and I think I'll do it a lot more from now on.

Posted by dosankodebbie at 6:53 PM 6 comments:

This week I finally had the chance to watch Letters from Iwo Jima, the second of the pair of films directed by Clint Eastwood portraying the Battle of Iwo Jima. While the first film, Flags of Our Fathers, depicts the battle from the American point of view, Letters from Iwo Jima portrays the same battle from the Japanese perspective, and is almost entirely in Japanese. Though I had heard the film received very high reviews (it is an excellent film), I had no particular interest in seeing it until I learned that it was both inspired by and based on the actual letters of Commander in Chief Tadamichi Kuribayashi (portrayed on screen by Ken Watanabe), and that these letters were, in fact, picture letters (ie: etegami)!

Kuribayashi wrote to his family frequently and obviously loved them deeply. As his children were still very young, he kept his letters simple and filled them with drawings. The picture letters were published by Shogakukan in 1992 as Gyokusai Soshireikan no Etegami (Picture Letters from Commander in Chief). Amazon now carries three books (that I know of) in English that incorporate the translations of these etegami. If you are interested, you may want to start with this one: Picture Letters from the Commander in Chief.
Posted by dosankodebbie at 4:00 PM 2 comments: 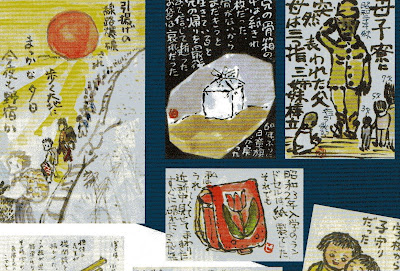 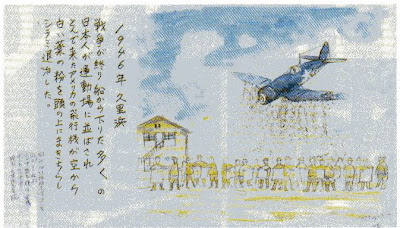 
Posted by dosankodebbie at 4:44 PM 5 comments: