lessons from the tomato exhibit

Today was the once-monthly gathering of "The Group of Four," a group that includes myself and three other Etegami artists. I use the word "artist" for the reader's sake. None of us really thinks of ourselves as artists. We just "do etegami." Of the four, Yoko has been doing etegami the longest, and as she is also the oldest, we tend to look to her for answers when we have questions.

I'm the only non-Japanese in the group, and the others are always interested to hear about the responses I get from the readers of my etegami blog. So today, I brought along the cards from the Tomato Etegami Exhibit. I was curious as to what their reaction would be. Their comments were quite enlightening, so I recorded them to share with you here. After you've finished reading their comments, please leave a comment of your own in the comment box.

Yoko, Michiko, Ryoko: Oh, how pretty these cards are! How creative!
Debbie: They are, aren't they? They were all submitted to my Tomato Etegami Call.
Yoko: These are etegami? (There is doubt in her voice.)
Debbie: They were intended as etegami. Do you think they qualify as etegami?
Michiko: Well, I think this one is an etegami. (She picks up a card showing three tomatoes in the hues of matcha green, chocolate, and brown). Isn't it amazing that she found tomatoes in these colors!
Debbie: I don't think the tomatoes actually came in those colors, Michiko. I think she chose to paint them in those colors to make them more interesting.
Michiko: Oh... but then it's not etegami... is it?
Ryoko: Oh, look at this one. How interesting. (She holds up a piece showing a tomato-red splatter with a stem in the middle) But this seems to be drawn from her imagination, not by observing an actual tomato.
Michiko: Yoko, if the image isn't drawn with a border, is it still etegami? (She points out a piece showing one red tomato in the middle of the card. We study the card, and for the first time I realize the tomato has no border.)
Yoko: I've never seen an etegami where the image wasn't first outlined in black ink, but the question never came up before that I know of. (She picks up another tomato card) Now, this one is close to being a traditional etegami, except I suspect the artist wasn't observing an actual tomato as he drew it. Observing the actual subject while drawing it is pretty basic to etegami.
Debbie: But what about the "War Memories" etegami exhibit that was published in the Japan Etegami Society magazine last summer? Those pieces were obviously drawn from memory, not from the actual scenes.
Yoko: That's true. But that was an unusual case. Those people were asked to draw something from the past that didn't exist anymore.
Ryoko: Wow! Look at this one drawn on corrugated cardboard! What's all the writing on the bottom, Debbie?
Debbie: That's my address, Ryoko. This artist puts the address and postage stamps on the same side as the artwork. See? She does it here too. (We look at two submissions from the same artist)
Ryoko: That's very creative, but it's unthinkable in etegami.
Yoko: As beautiful as it is, the shadow on this one disqualifies it from being etegami. (She points at the purple shadowing underneath a tomato. And I notice that this one also has no border.) It's a still life painting rather than an etegami.
Michiko: These are all gorgeous. But I wouldn't describe them as etegami. They are Art with a capital A. Some of these are still life paintings, like Yoko says. Some are graphic arts or illustrations, but they're not etegami. (She points at several pieces and then waves her hand over all the cards.)
Debbie: Can someone articulate the difference for me?
Ryoko: It's like they're making it look the way they want it to look by maintaining control over the image. In etegami we don't have that kind of control over the drawing. We're not supposed to have that kind of control. We don't know what it's going to look like till we're done. And it's almost impossible to make adjustments once the ink is on paper, so we have to take it or leave it as it turns out. Right, Yoko?
Yoko: The method and the tools we use make it purposely hard to control the drawing. We move the ink brush so slowly that it jerks with each heartbeat. Add that to the coarseness of the card which creates friction with the brush, making our lines even harder to control. There aren't many rules to etegami. But trying not to have too much control over the ink brush is fundamental. I was also taught that you should draw from observing the actual subject and that you should try not to use more than three colors in one etegami.
Debbie: Yeah, that's how I was taught. But I break the color rule a lot.
Yoko: Yes, I know. (She says it with a smile.)
Debbie: I also draw from photographs sometimes.
Yoko: That's allowed if you can't get hold of the actual subject. But it's a poor second choice.

This is as much of our discussion as I have room to put here, but I'd like to direct your attention to the April 2009 post on "living lines" that explains how important it is in etegami not to have too much control over your ink brush or other writing utensil. If you use a pen rather than an ink brush, you might want to try dangling it from the end with the tips of your fingers, as shown in the photo in the post.
Posted by dosankodebbie at 10:18 PM 11 comments: 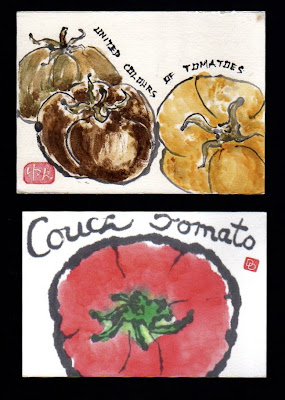 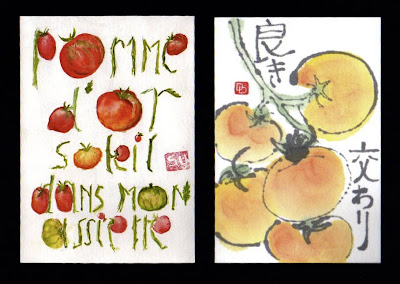 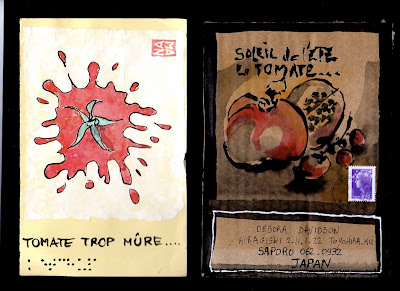 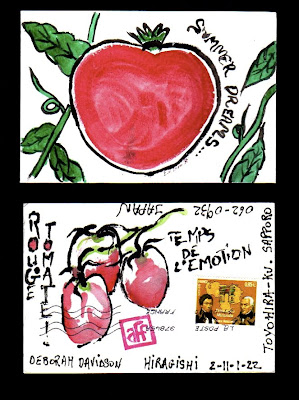 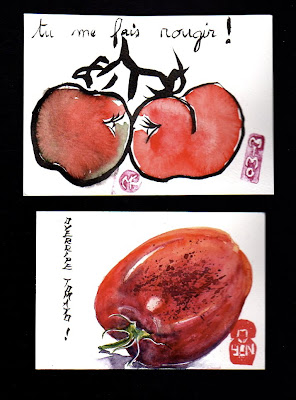 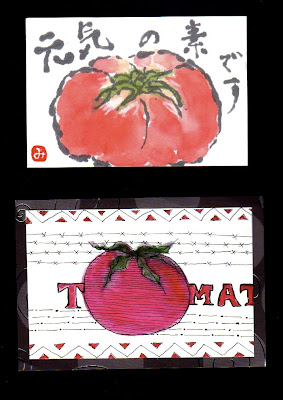 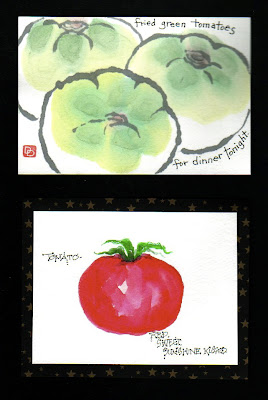 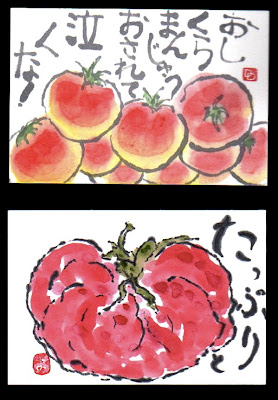 My deep appreciation to each person who submitted artwork to the Tomato Etegami Call. By this time you should all have received your gift packet of blank washi postcards. Let me know if your packet hasn't arrived. Also, please let me know if you submitted a card before April 1 that isn't exhibited here. If it arrives late, I will add it to this post.

Though the Tomato Etegami call is now closed, the Food/Recipe Mailart Call will continue till February 2011. I welcome your submissions to that call and will display them on the mailart gallery blog at http://mailartgallery.blogspot.com. I also welcome non-food-themed mailart.

Leave comments and questions about the Tomato Etegami exhibit below. I will be referring to the exhibit in upcoming posts as we continue to discuss what makes etegami different from other kinds of mailart.
Posted by dosankodebbie at 11:45 PM 10 comments: