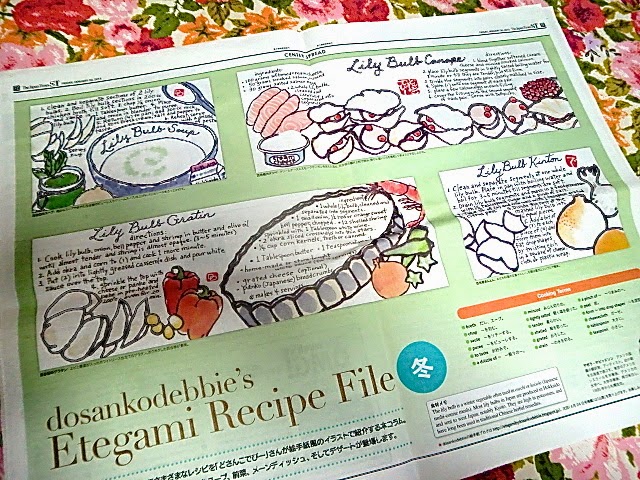 The first set of the illustrated recipes I was asked to create for the Japan Times ST was published as a center spread this week. The theme of this set is  yuri-ne (lily bulb, also called lily root), which I used as the main ingredient for a soup, an appetizer, a main dish, and even a dessert!

Hokkaido produces over 95% of Japan's lily bulbs, most of which get sent south to Kyoto where they are used in classical Japanese cuisine.

Fresh lily bulbs are creamy white, and look like slightly-flattened heads of garlic. They have a delicate, mildly sweet flavor, and are crunchy when raw and silky-creamy when cooked. In classical Japanese cooking, the segments are separated, then steamed or boiled. I recently tried the very non-traditional method of roasting them whole in the oven, which intensified their flavor and texture, and was practically swept off my feet by their yumminess. Check out this link to read more about yuri-ne.

My next set of illustrated recipes will be published in April. Stay tuned!

Posted by dosankodebbie at 3:23 PM 4 comments: 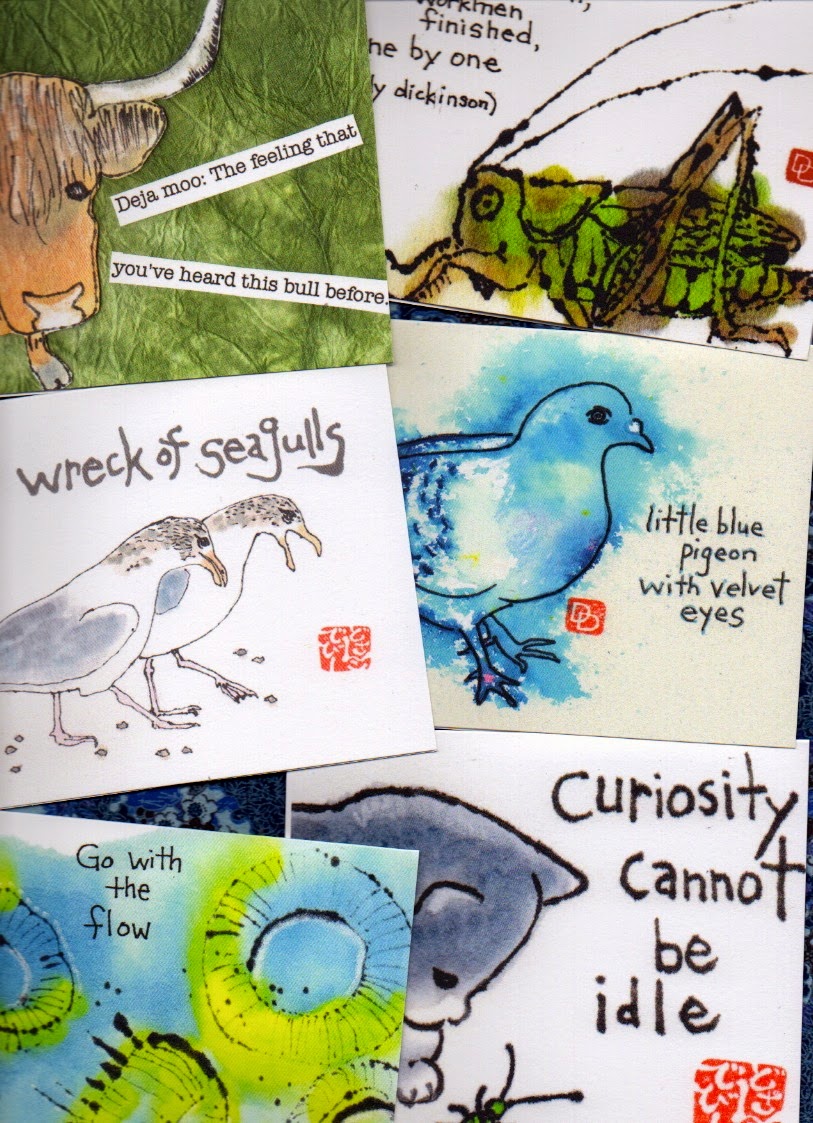 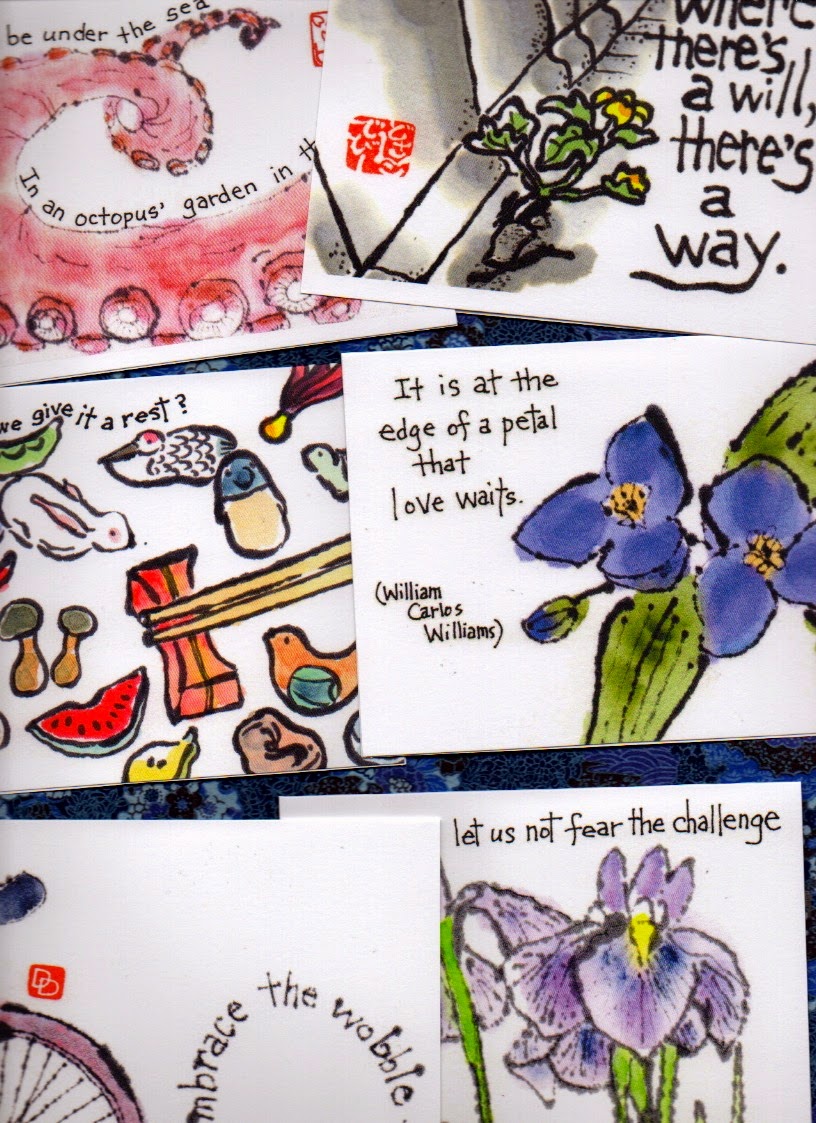 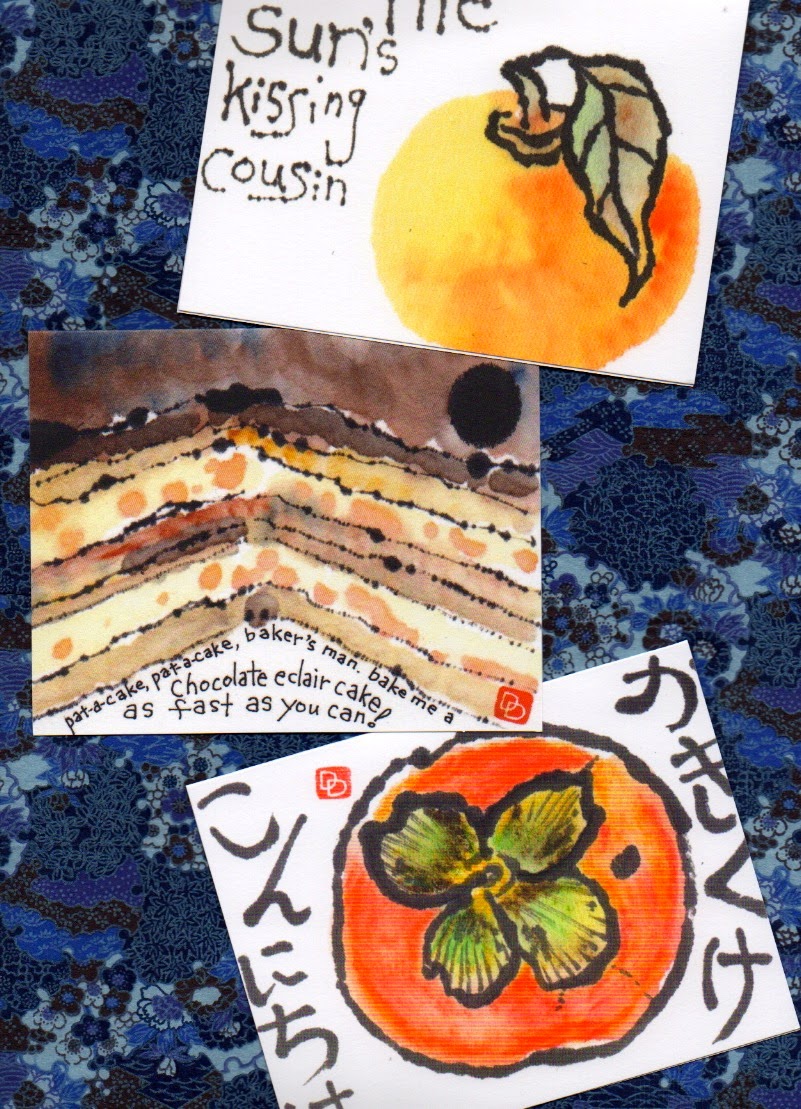 One printed card comes free with any purchase (except digital downloads) from my Etsy shop-- and two cards if the purchase is an original etegami, including custom etegami. These are folded notecards that are already listed on my shop in sets of five, with envelopes. These freebie single cards don't come with envelopes. The offer is valid as long as the cards last, but I don't plan to mention it again on this blog. When you make your purchase on Etsy, tell me in the customer comment box which card you want. And just in case I've run out of the one you specified, give me your second and third choices too.

Posted by dosankodebbie at 6:15 PM 4 comments: 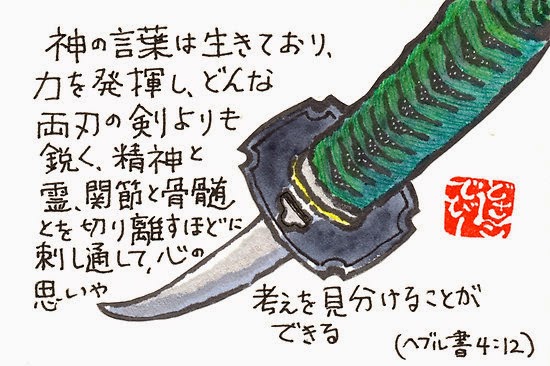 Posted by dosankodebbie at 7:04 PM 4 comments: 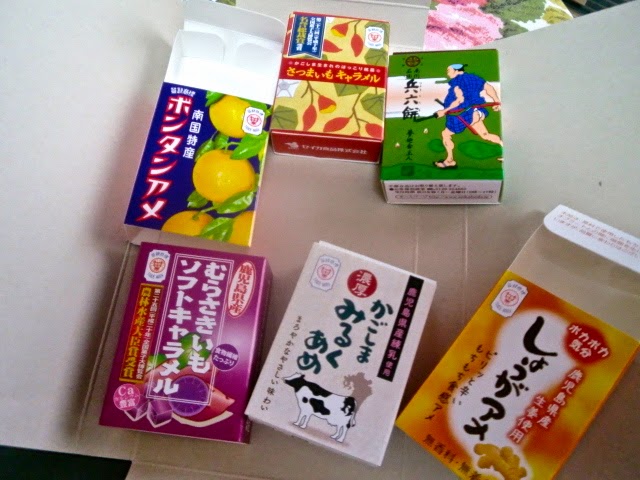 What would you do if your sweet or savory snacks came in small, colorful, artsy paper boxes like these? Would you eat the treats inside and throw out the box? Of course not!

You could display them on your bookshelf, or make practical use of them for collecting loose buttons and paper clips. But I like to turn them into mail art. 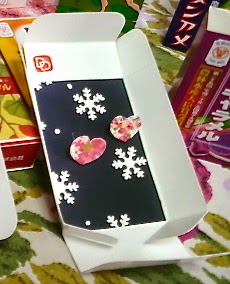 I converted it into a pop-up Valentine box card by recycling old Christmas cards to decorate the inside. I used a snowflake hole puncher to make holes in the black backside of one Christmas card, and cut the pink hearts out by hand from the colorful front side of another. It still needs words, which I'll add before I send it. 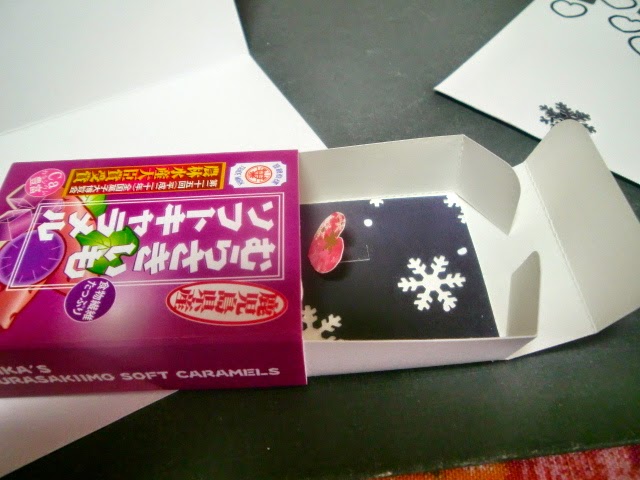 Posted by dosankodebbie at 4:10 PM 2 comments:

take a tabi with me 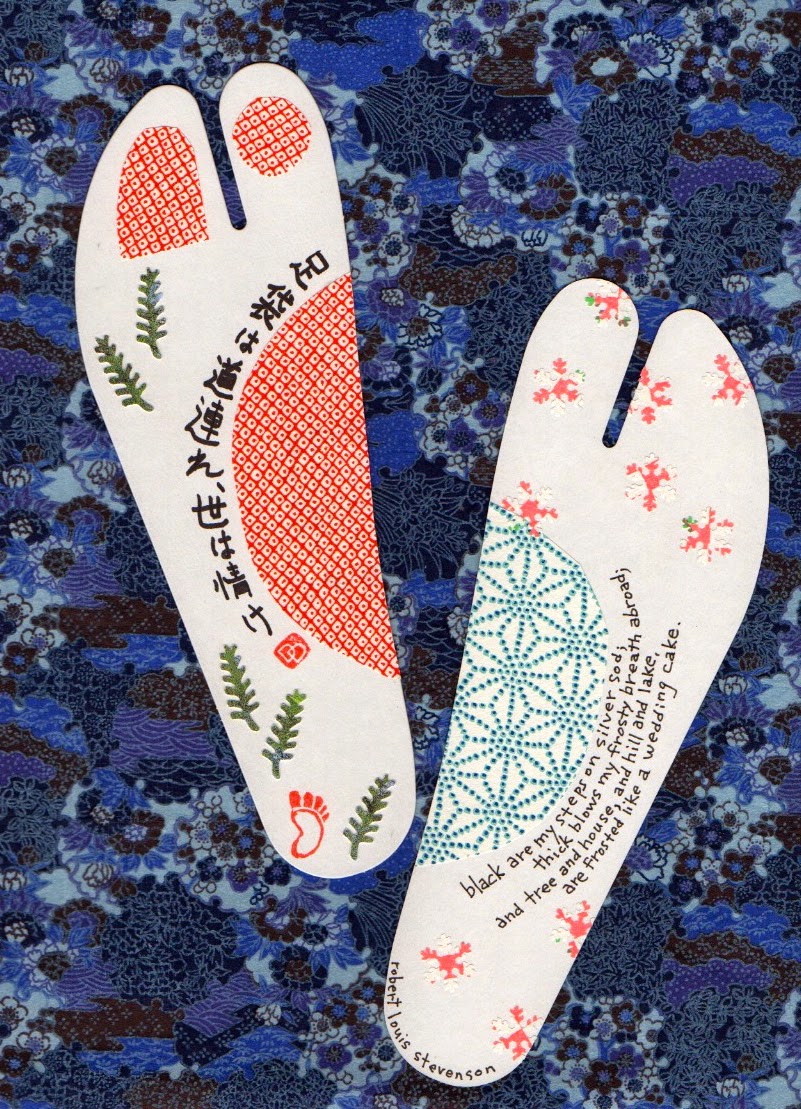 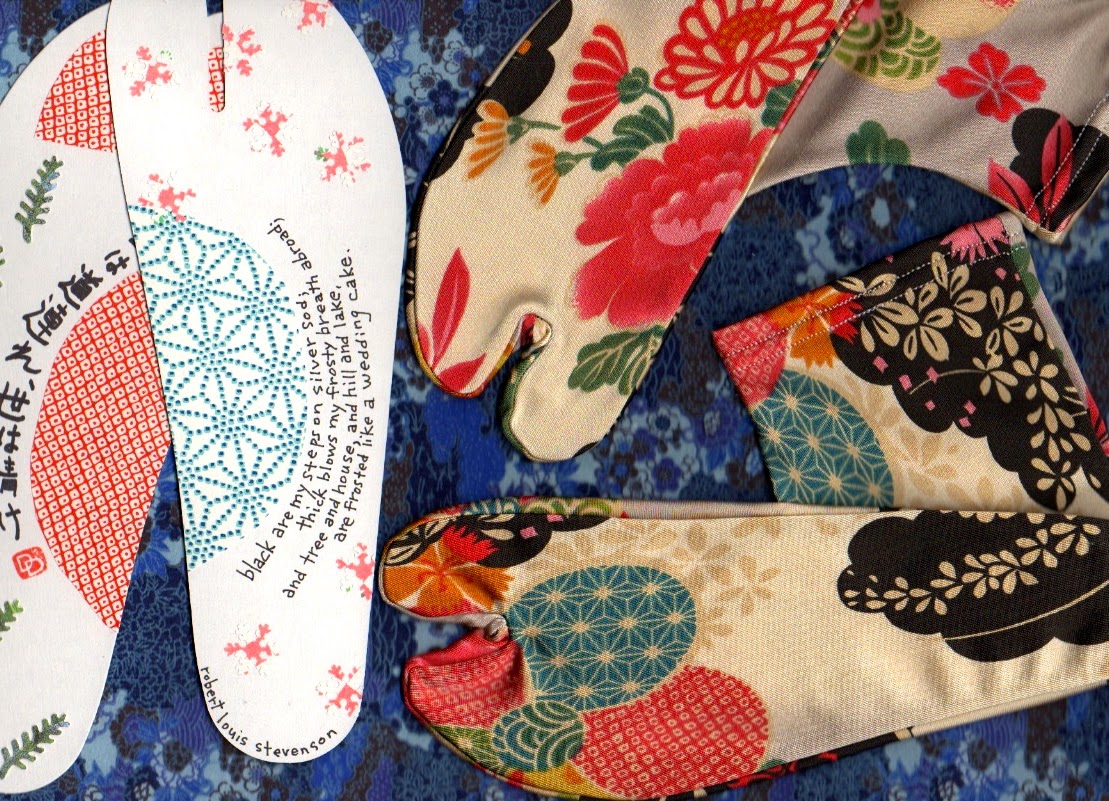 Years ago, I purchased a pair of tabi socks, which, if you've never heard of them before, are ankle-high, with a separation between the big toe and other toes. They are worn in Japan by both men and women, with traditional thonged Japanese footwear like zori and geta. Tabi are usually very white, suitable for formal situations like tea ceremony. The ones I bought had a traditional-but-flashy design, and I meant to (but never did) send them to a young niece of mine in the US where they wouldn't shock anyone.

I came across these tabi the other day while sorting the storage room, and decided to take them out of their packaging for a closer look. There was a foot-shaped stiff board inside each sock, and when I pulled them out, I could feel them begging to be made into etegami-collages. So that's what I did.

For the left foot, I played with the Japanese proverb "tabi wa michizure, Yo wa nasake" (Just as a journey is improved by traveling companions, life is improved by compassion/ tender human feelings.) The word tabi (journey) has the same sound as the word for the aforementioned two-toed traditional socks. So I switched the original character for journey with the two characters that mean tabi socks. (I'm so clever. ha ha)

For the right foot, I quoted the last stanza of Robert Louis Stevenson's poem Winter-Time, and decorated it with snow-flakes.

Black are my steps on silver sod;
Thick blows my frosty breath abroad;
And tree and house, and hill and lake,
Are frosted like a wedding-cake.

Posted by dosankodebbie at 7:01 PM 3 comments:

the only easy day was yesterday 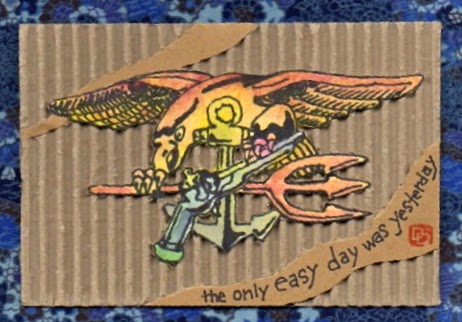 A corrugated cardboard spin-off resulting from a recent custom order for an etegami version of the US Navy SEALs insignia. One of the cool things about taking custom orders is that it often introduces me to worlds I would never have explored on my own initiative. Does that happen to you?

Posted by dosankodebbie at 12:41 AM 4 comments: 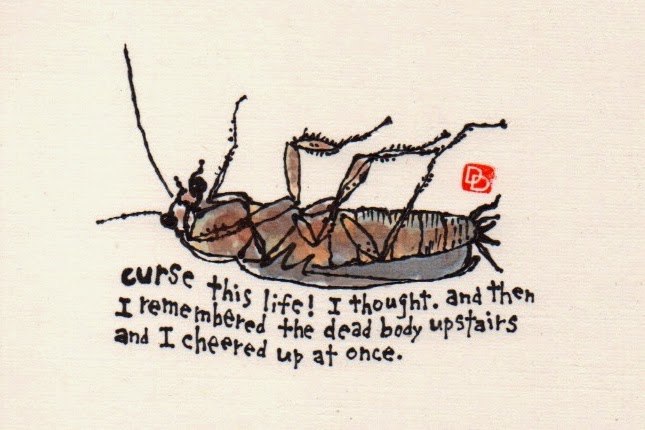 Today (2nd Monday of January) is Coming-of-Age Day in Japan. My own coming-of-age was 40 years ago. I'm celebrating it by reading As Chimney Sweepers Come to Dust, the latest volume in the Flavia de Luce novels (by Alan Bradley), because I feel more of a bond with 12-year-old Flavia than I do with this year's 20-year-olds. I have a notebook full of Flavia quotes waiting to be clothed in etegami. But they're not for the squeamish. :)

Posted by dosankodebbie at 12:35 AM 2 comments: 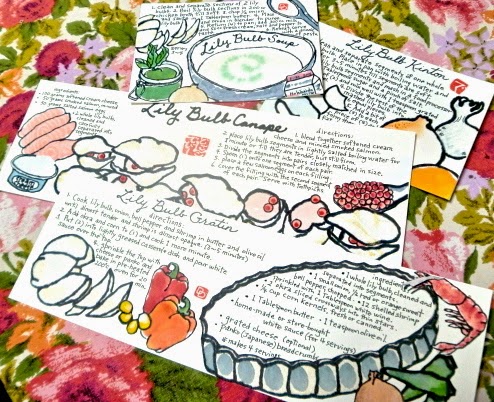 I caught a bad cold over the holidays that I still haven't licked, but I managed to make the deadline for the first set of illustrated recipes I was asked to do for the The Japan Times-ST. It's been a while since I last painted an etegami-style illustrated recipe. If you've been following me long enough, you know I've done many in the past for They Draw and Cook, one of my favorite art & recipes sites in the whole wide world.  If you are a food-loving artist who has never submitted a recipe to TDAC, you really should. And whether or not you do that, it's loads of fun just to browse their website.

Posted by dosankodebbie at 4:47 PM 4 comments: