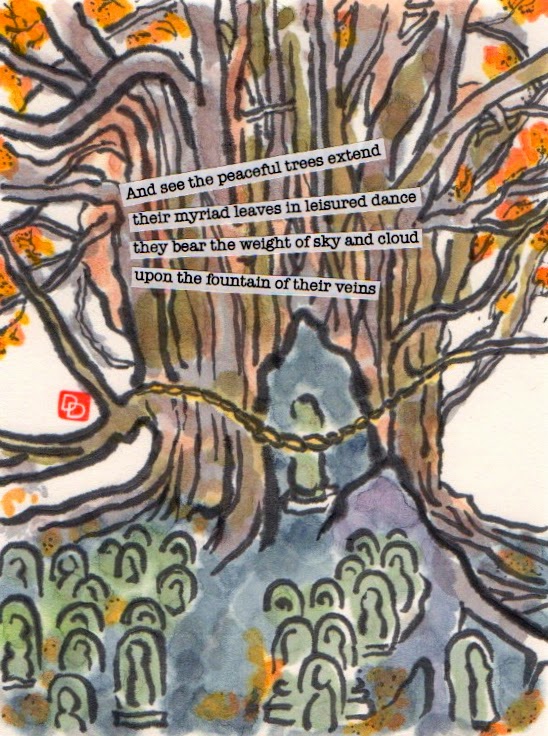 Posted by dosankodebbie at 6:16 PM 7 comments:


I've started a new series of cat and dog etegami with a different focus than my previous work. Please send me a photo of your dog or cat that clearly shows their tail or whiskers. If it inspires an etegami, I will send you a copy. Email your photo to dosankodebbie (at) yahoo (dot) co (dot) jp

Posted by dosankodebbie at 4:15 PM 3 comments: 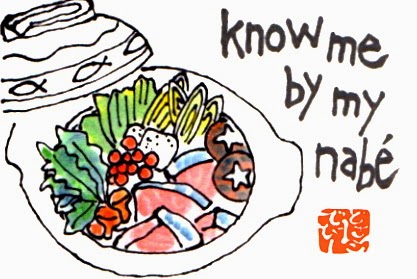 A short story by Kris Kosaka (with my artwork!) was recently published in the fabulous Kyoto Journal (issue 79). These are the illustrations I did for Dog Boy, a story about an Ainu boy's first day in Japanese public school. Breaking News: Now anyone, even non-subscribers, can access the story at the KJ website.
Posted by dosankodebbie at 4:34 PM 5 comments: 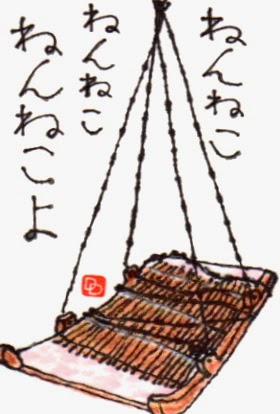 This is an image of an Ainu cradle, called a shinta. The Ainu are the indigenous people of northern Japan. The writing that accompanies the image is from the refrain of an old Japanese lullaby.

I sent the original etegami to my writer friend Linda Austin, whose work has inspired my etegami in the past (click here to see related post), but this image is also posted on the Mama Lisa's World website, as an illustration for a series of posts on lullabies from around the world.

Mama Lisa' World is chock full of cultural information and fun activities. If you have young children in your life, or you are involved in any way with international music and culture, you'll find lots of cool stuff there.

Posted by dosankodebbie at 4:53 PM No comments: 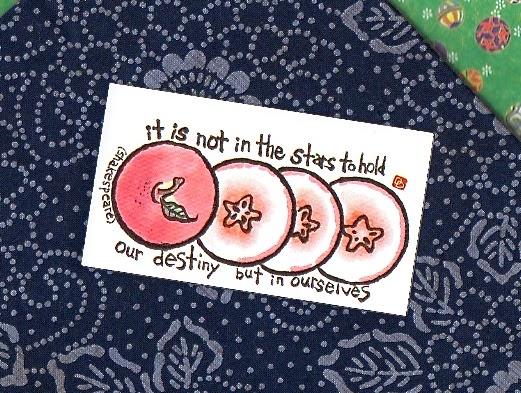 I've been converting some of my etegami into business card-sized (approx. 5 x 9 cm) flexible magnets. The magnet shown here is a print of my Apple Stars etegami.  The original is currently listed here on my Etsy shop. From today until March 31, I will enclose one magnet free with every purchase of an original etegami (not prints or supplies) from my Etsy shop. This item and other flexible etegami magnets will be available for separate purchase after March. I stuck my Apple Stars magnet to the black filing cabinet next to my work desk where I see it every day, partly because I already have so many magnets on my refrigerator. :p 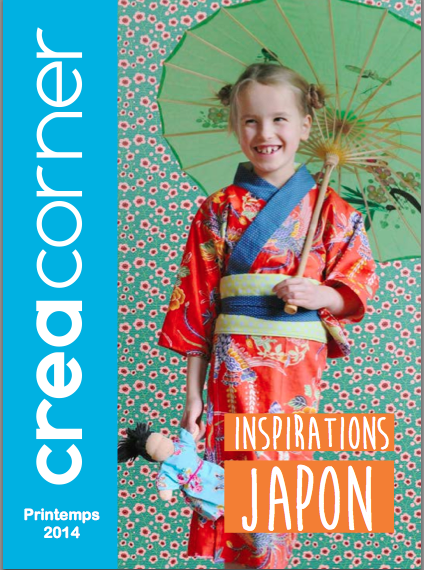 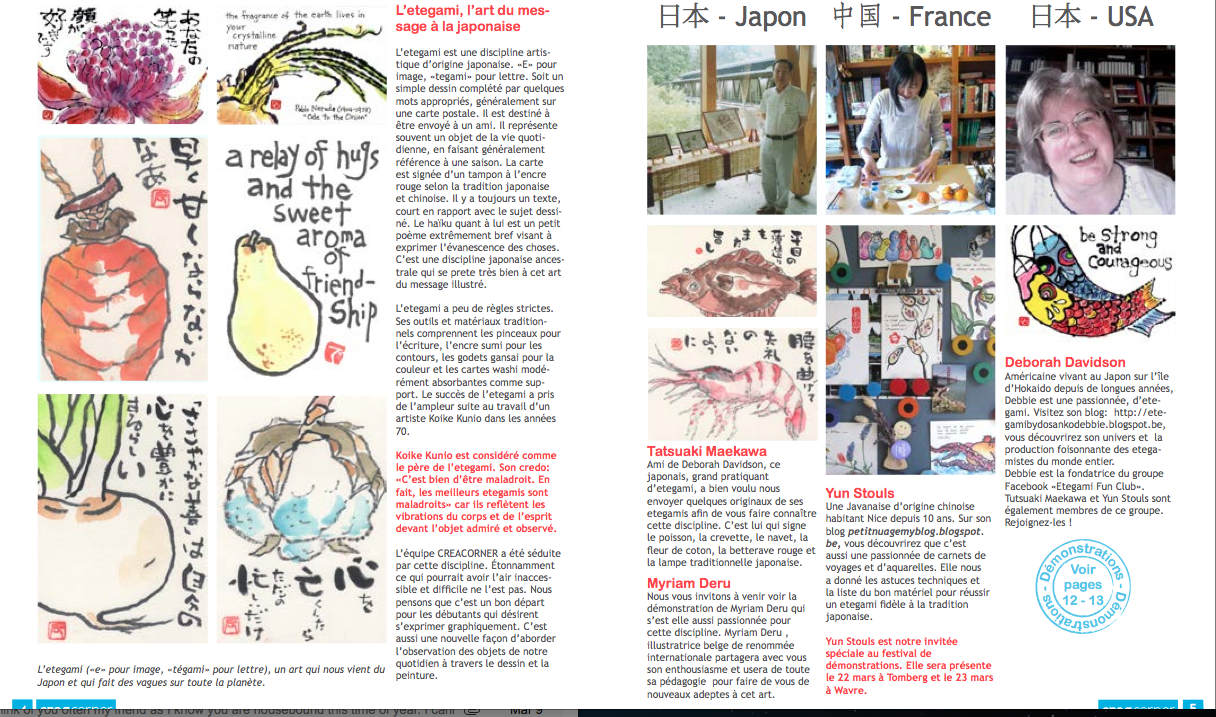 I was privileged to have my work featured in the Spring 2014 issue of the Belgium-based art magazine Creacorner. The theme of the whole issue is Japan as an inspiration for art. My talented etegami colleagues Yun and Tatsuaki, whose works are frequently posted on my mailart gallery blog, are also featured. Creacorner is bright and colorful-- a true feast for the eyes. You can view the whole issue at this link.
Posted by dosankodebbie at 4:39 PM 5 comments:

a snake, a proverb, and a bit of accidental irony I had an unfinished snake etegami left over from making new year cards for 2013, the year of the snake. So I wrote the words of a Japanese proverb and added it to my long-neglected Japanese Proverb series.

Translated literally, the words say "let yourself be wrapped up by what is long," and it means that the safest course of action is to do whatever the person in power (your boss, for example) wants.

It's a proverb I've never illustrated before, because it irritates me. I've decided to leave it uncolored for the time being. It will soon be on its way to a Postcrosser in the Ukraine. Oops, I just realized the irony of that. Hmm, maybe I'll send it to the Postcrosser in the Netherlands instead.

Posted by dosankodebbie at 9:53 PM No comments: 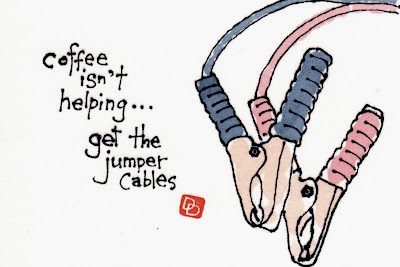 This is a re-post, but nothing could be more appropriate for the way I feel this morning. Argh, Hokkaido winters are just too long. I need new spark plugs or something.

Posted by dosankodebbie at 3:24 PM 4 comments: 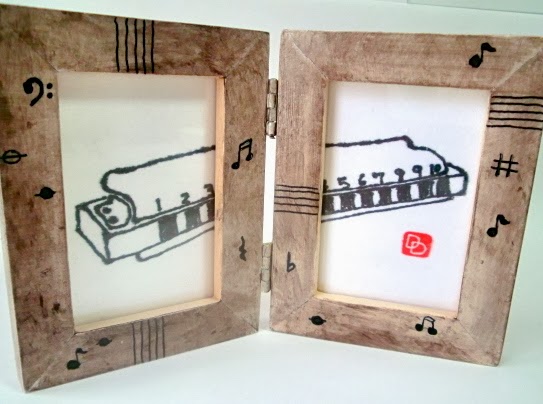 when you can't paint, what do you do? 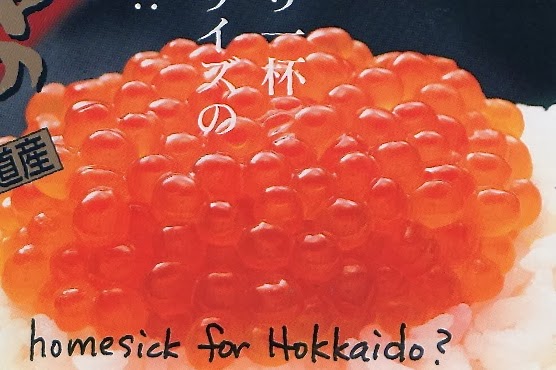 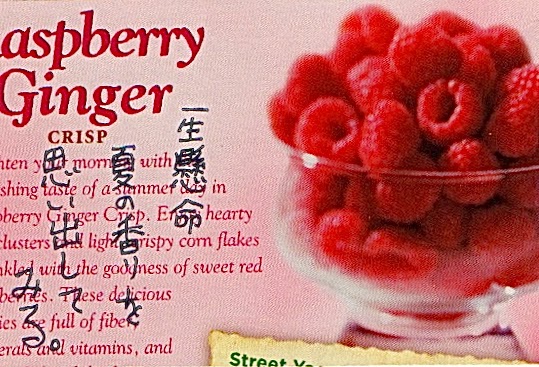 So here is what I do when I can't paint: I cut out pretty cards from boxes that various foodstuffs come in. In fact, I never throw away cereal boxes or cookie boxes or tea boxes or bird seed boxes or curry roux boxes (you name the box) without first cutting out postcard-sized pieces of the most interesting or colorful parts of the box. I keep these on hand for all sorts of uses. Like for writing thank-you notes to include with the orders I ship to my Etsy customers.

Monday is the day I reserve for sending etegami to shut-ins and people in the hospital or nursing homes. Today, I picked the salmon eggs card for my father, who spent nearly his entire adult life in Japan, but now lives in a nursing home in the US. The cereal box card with raspberries are for a sweet Japanese lady in a nursing home in Japan. The handwritten words on the raspberry card say "Trying very hard to remember the smell of summer."
Posted by dosankodebbie at 5:28 AM 3 comments: