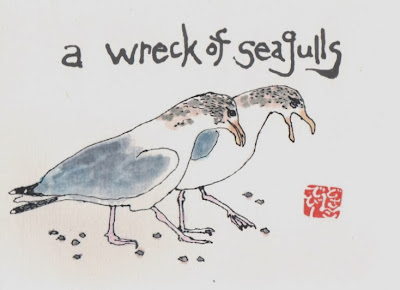 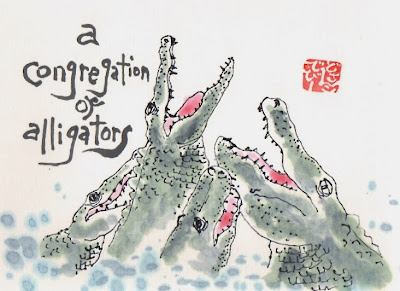 Posted by dosankodebbie at 3:48 PM 3 comments: 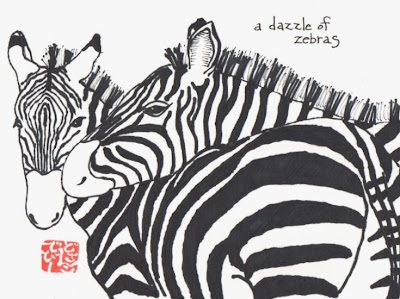 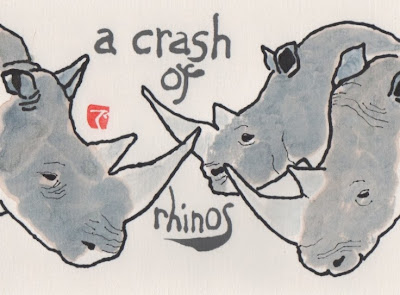 You've probably figured out by now how much I like word play and just about anything to do with language. I've been learning the less commonly known words that refer to groups of various animals. I know the common ones, like "flock of sheep" and "herd of cattle." But now I'm learning expressions like "dazzle of zebras" and "crash of rhinoceros" (did you know there are three correct plural forms for rhinoceros? rhi·noc·er·os·es also rhi·noc·er·os or -noc·eri)

Anyway, here are the first two in the new series based on those words. I suppose I'll keep adding more until I burn out.

Posted by dosankodebbie at 9:57 PM 3 comments:


There are two gift-giving seasons in Japan. One is in the summer and one is in the winter. Winter gifts often involve agricultural produce for which the sender's home prefecture is known. Each winter for almost twenty years, I have received potatoes from an old friend in south-western Hokkaido, tangerines from an even older friend in Nagoya, and persimmons from the oldest friend of all in Shikoku. Last week I received a box of frozen Hokkaido ikura (salmon caviar or red caviar) from a relatively new friend who actually lives near me in Hokkaido. Besides reciprocating with gifts of my own, I try to send each of these friends an Etegami thank-you card with a painted image of the gift I received from them.

After twenty years, though, it's hard to think of new ways to depict the same fruits and vegetables. I feel like I've painted them from every possible angle, as well as shown them sliced, peeled, or cooked in every possible way. So this year, I've decided to try whimsy. The writing on this card says "The feast known as friendship."
Posted by dosankodebbie at 7:17 PM 3 comments: 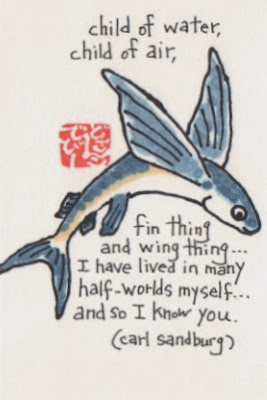 One of several versions on the theme of being raised a third culture kid (tck). I just love Sandburg's poem! It speaks to my experience so well. The original is for sale in my Etsy shop, prints can be ordered from RedBubble.

And I still don't understand why my white cards look gray when I post them here. 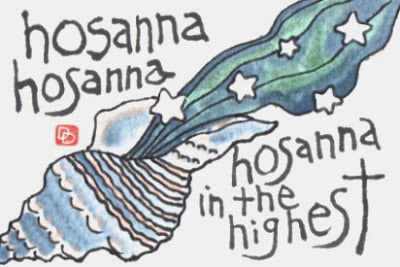 If you're looking for Christmas cards, please check out my collection of holiday cards on RedBubble  where you can order printed cards of my etegami.

Posted by dosankodebbie at 4:52 PM 5 comments: 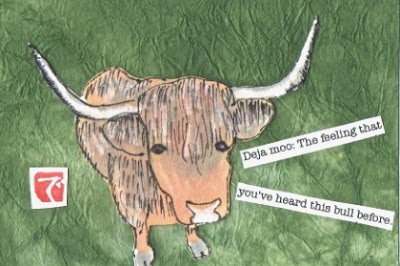 Couldn't help myself. Don't get me wrong; I really appreciate social networking and its many advantages. But sometimes....

The original is for sale on my Etsy shop, and prints can be ordered from my RedBubble gallery.

Posted by dosankodebbie at 4:18 PM 7 comments: 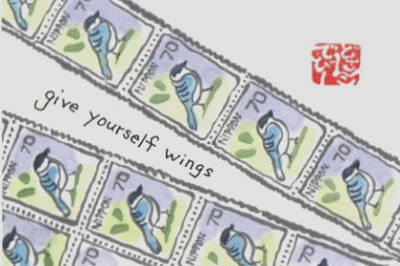 There are wings for even a mobility-challenged person like myself. My wings are postage stamps, and they can fly me to just about every corner of the earth.

Posted by dosankodebbie at 2:31 PM 5 comments:

The December 2013 issue of the Etegami Fun Club Newsletter has been sent off to all who have signed up to receive it. If you can't find it in your Inbox, check your Spam folder. This is the final issue of the series. You don't want to miss it. (So sorry I missed some typos in the newsletter...)
Posted by dosankodebbie at 11:55 PM No comments: 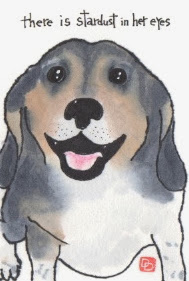 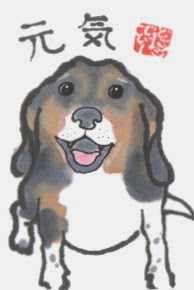 Posted by dosankodebbie at 4:55 PM No comments: 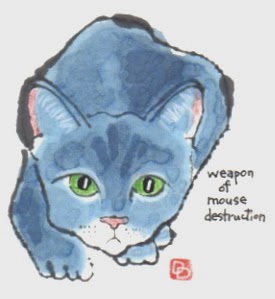 Click here to find out who won the drawing for the Goldfish Words greeting card ("everyone has something to say").

Here's a cool link to some samples pages of the November issue of the Japan Etegami Society monthly magazine. It features ideas for New Years Etegami with horse-dolls and images sent to the magazine by readers. 2014 is the Year of the Horse.
Posted by dosankodebbie at 4:53 PM 4 comments:

everyone has something to say (give-away)

Ooooookay, it's high time for another give-away. This time it's a fine quality printed greeting card (blank inside), made from an original I painted for a communications museum mailart exhibit several years ago. It's the same size as the original: 100 x 150mm ( 4” x 6” ), and comes with a blank white mailing envelope. If you want to participate in the drawing, comment below and make sure I have a way to contact you. There is only one, and I will announce the winner on November 10, 2013.


Update: Congratulations to Dana on winning the drawing for this card. Please contact me with your postal address. Thank you all for your comments and enthusiasm. There will be more give-aways in the future.

Posted by dosankodebbie at 3:02 PM 9 comments: