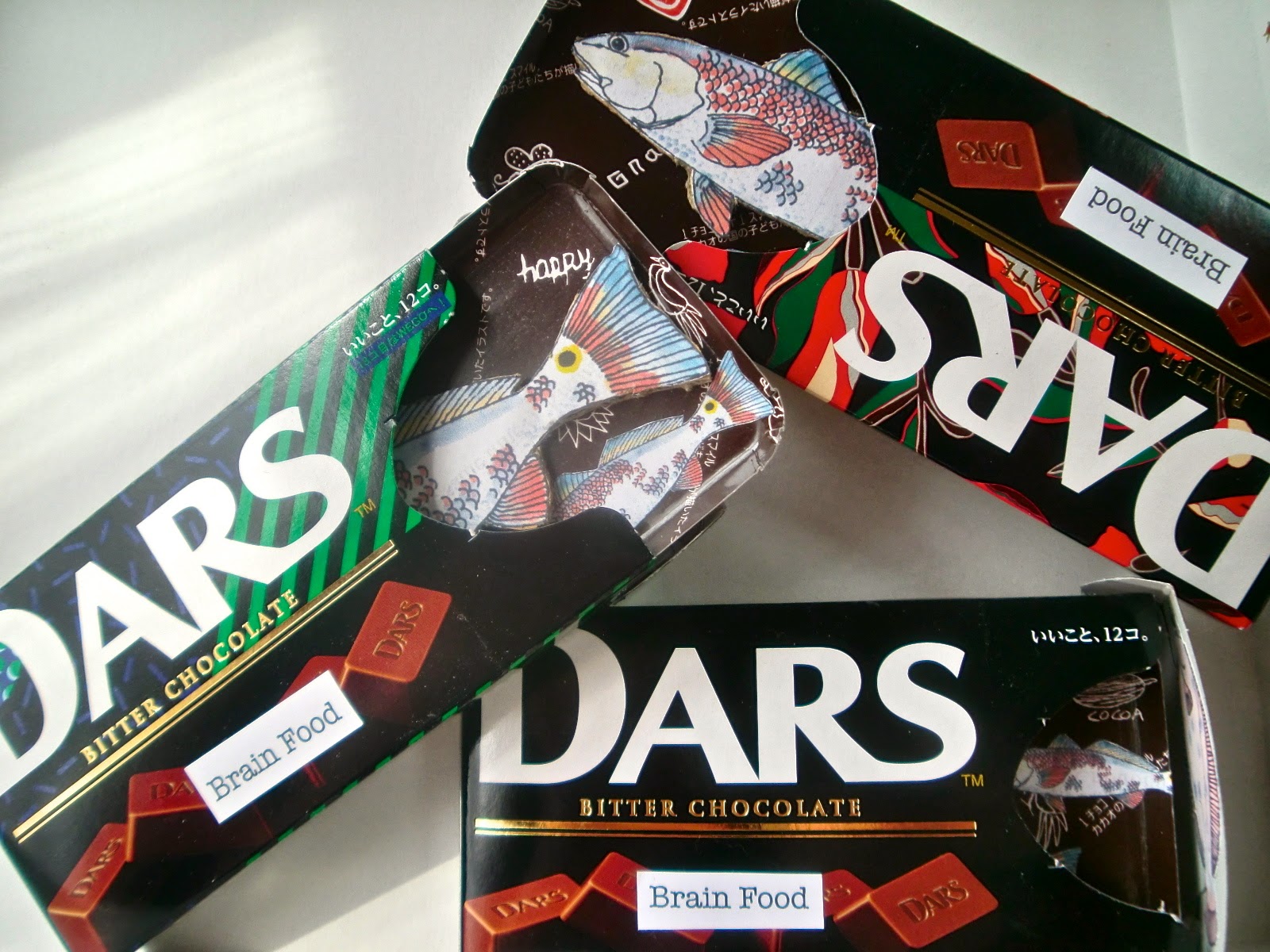 My last etegami project left me so drained, I've been having trouble concentrating on the next one.  So I decided to have fish for lunch. Welllll, didn't your mother teach you that fish is brain food?

I googled it to make sure, and my wise mother's teaching was confirmed. Actually, I eat fish almost every day anyway-- but of course, I live in Japan, and we know a thing or two about good fish.

Anyway, after my brain food lunch I got inspired to make some brain food mail art. Here's another set for my on-going candy box mail art series. Let me know if you'd like one.

Posted by dosankodebbie at 6:58 PM 6 comments: 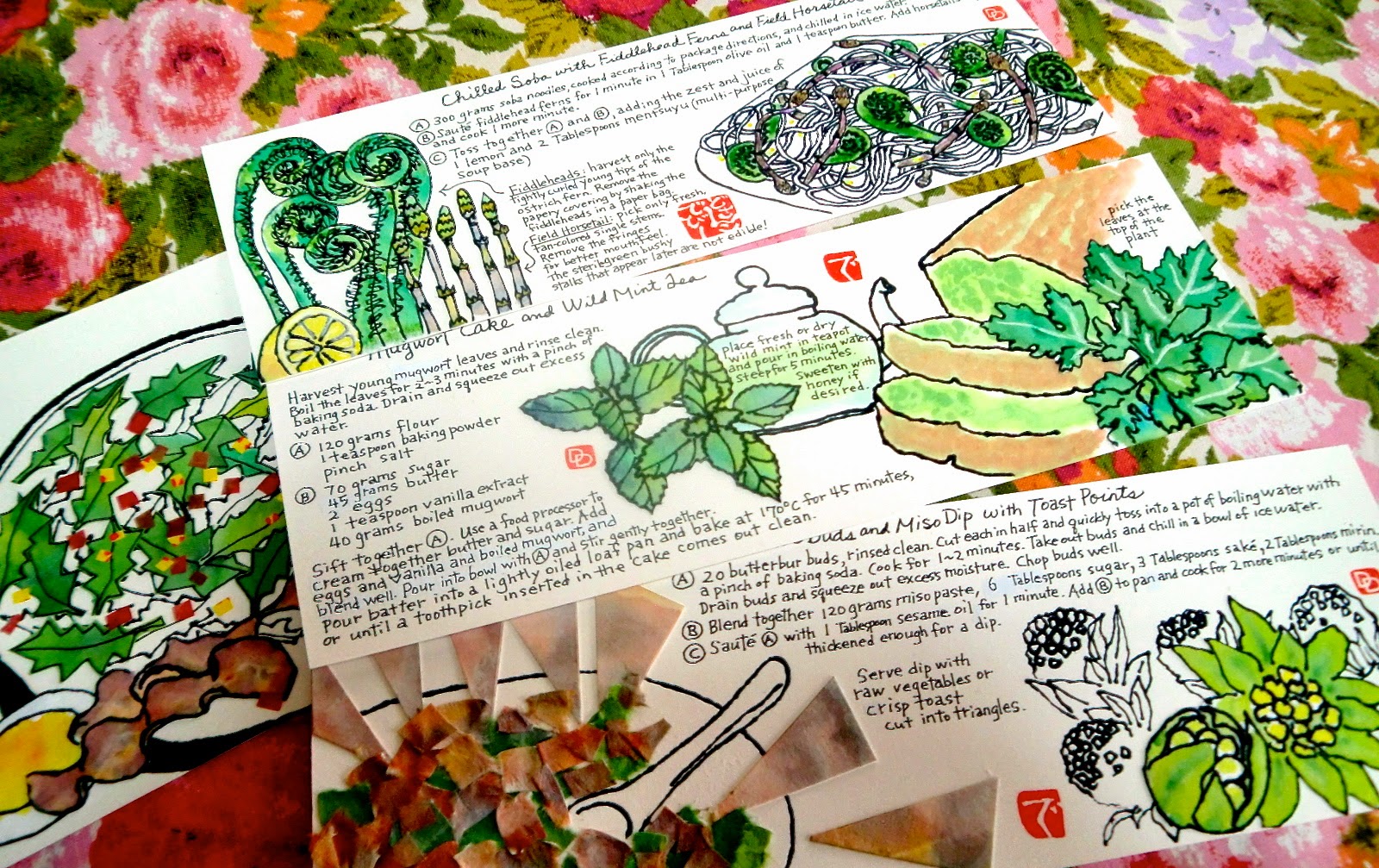 I've mentioned before that I was asked by the Japan Times ST to create 4 sets of illustrated recipes this year-- one for each season. For a while I was afraid I wasn't going to make the April 1 deadline for the spring set. But I find that-- for better or for worse-- deadlines hold a kind of magical power over me.

Somehow I was able to draw on hidden reserves of energy, and I managed to finish these with time to spare. I'm scared to examine them too closely lest I find new reasons to start all over from the beginning. (I do that a lot... A whole lot.)

Each recipe features what the Japanese call sansai --wild edible plants, especially those that signal the end of winter and the beginning of spring. In this case, the fiddlehead ferns, field horsetails, wild mint, butterbur, dandelions, wild mitsuba, mugwort, and even the leaves of the yaezakura cherry tree that grow in my very neglected back yard. They serve as my excuse when the neighbors wonder out loud if I ever plan to "do anything with that jungle."

The "jungle" is unclaimed by dogs or cats, untouched by either artificial fertilizer or week killer, partially-enclosed by a wall and not particularly close to heavily-trafficked roads. So it's quite safe to eat the edible weeds that grow there-- in moderation. Besides, it wouldn't be right to greet a Japanese spring without adding sansai to the menu. It just wouldn't.

Posted by dosankodebbie at 9:05 PM 5 comments:

the games of childhood 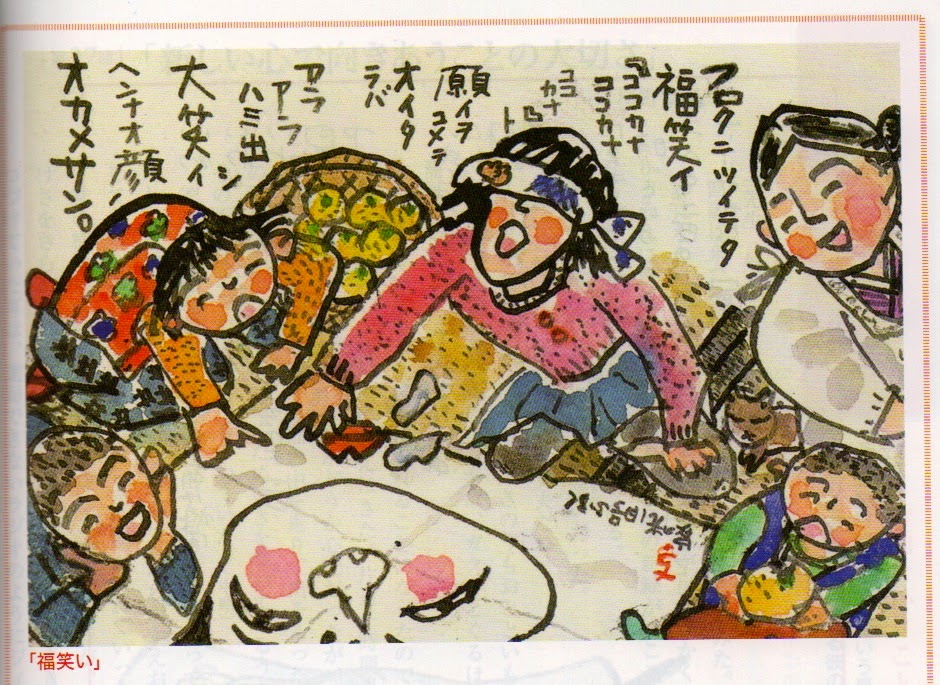 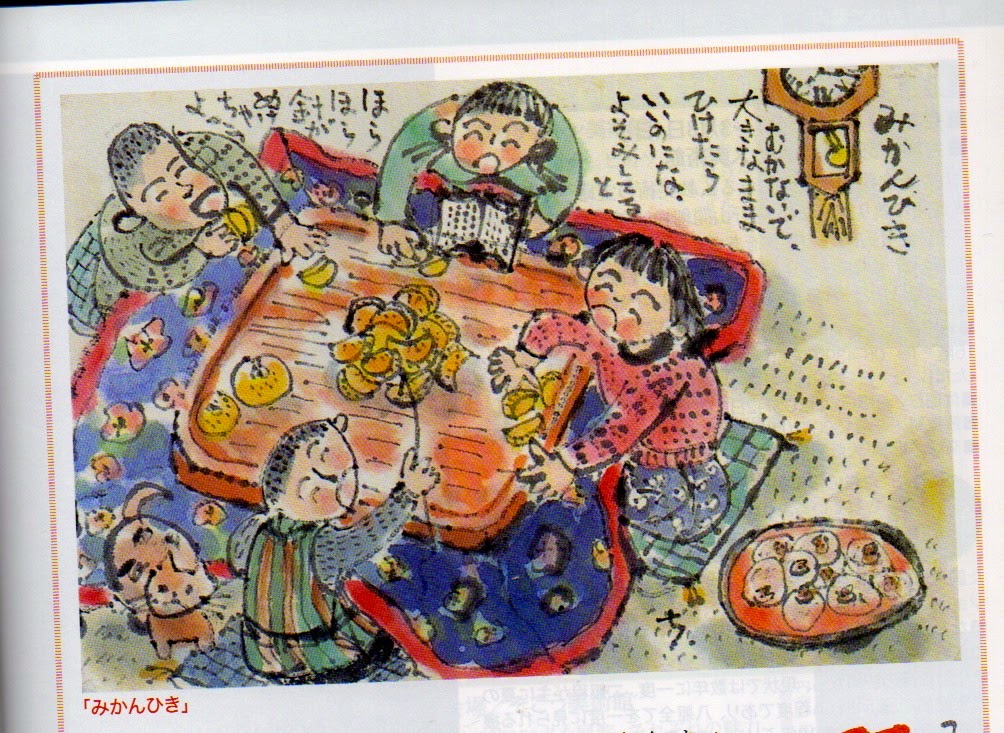 I had noticed the first photo in the January issue of Gekkan Etegami (a monthly magazine published by the Japan Etegami Society), but it wasn't until I saw the February and March issues that I realized the magazine was doing a monthly serial featuring etegami by the artist known as "Grandma Chieko" (Chieko Matsuo).

These etegami are part of a collection that was published in 2004 under the title Osana Asobi (the games of childhood). The title refers to Matsuo's own childhood in rural Nagano prefecture, and the games are ones that most children today-- glued as they are to their electronic gadgets-- have probably never played. 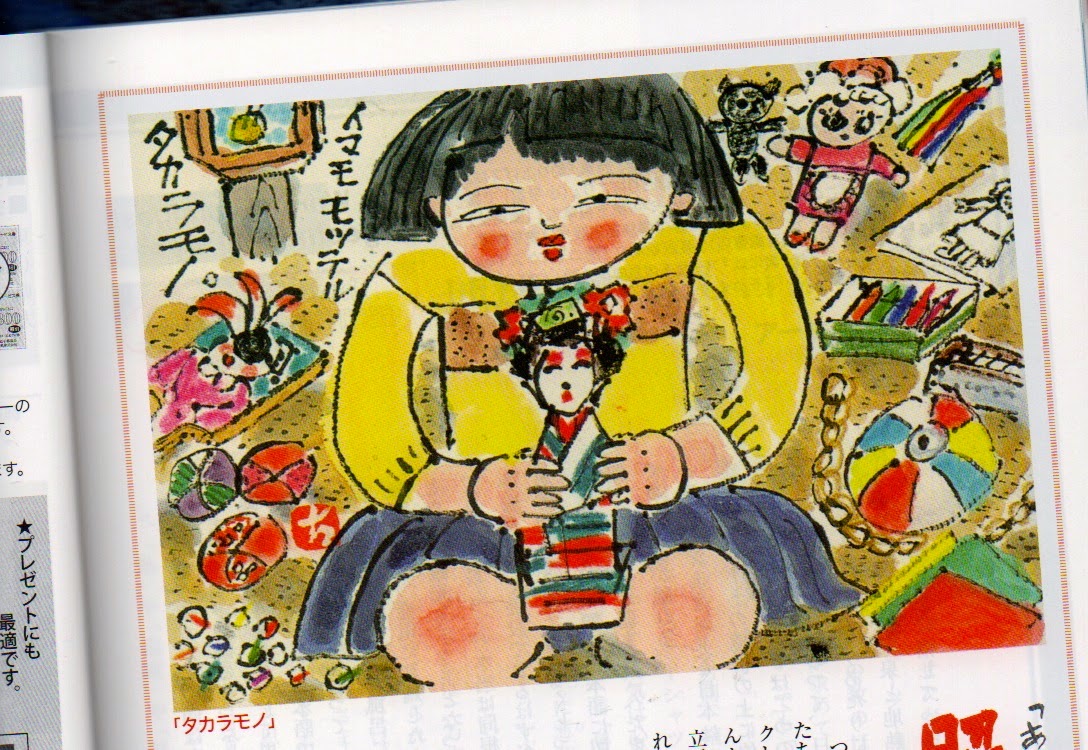 The etegami in the three photos shown here depict indoor games played during the long, cold winters of northern Japan. Photo#1 depicts Fukuwarai, which is similar in concept to Pin the Tail on the Donkey. Photo#2  depicts Mikan Hiki (fishing for tangerines). And Photo#3 depicts a scattering of toys and tools that include crayons, a paper balloon, cloth and paper dolls, o-tedama (bean bags for juggling), a paddle and shuttlecock for playing hanetsuki, colored paper for origami, and my own favorite: o-hajiki-- the flat-ish glass "marbles" used by girls. "I still have these treasures," it says on the card.

Matsuo's style is to fill the card with detail and use jillions of colors. It feels a bit cluttered compared to the style endorsed by Koike, the "father" of the modern etegami movement. But her etegami are warm and cozy, and they give me a feeling of security. It must be because she and I are both children of the Showa era. The youth of today were born in the Heisei era. I wonder what images make them feel happy and safe. Smart phones and keyboards? It's an interesting thought.

Posted by dosankodebbie at 7:48 PM 4 comments: You may remember that I have been commissioned this year by the Japan Times ST to create four sets of illustrated recipes --one for each season. I chose to feature lily bulbs in the winter set of recipes, which was published in January.

The deadline for the spring set is fast approaching, and after having been sick and unmotivated for a couple weeks, I'm glad to say that I'm finally back at work. Here's a sneak peak at two of my works-in-progress in a 4-recipe set featuring edible wild plants (some people call them weeds!).

All the "weeds" used in this set of recipes grow wild in my back yard, which-- being far enough from heavily-traveled roads, untouched by artificial chemicals, and unclaimed by dogs or cats-- I have little reason to hesitate using as my outdoor pantry.

When completed, the two cards shown here will describe recipes for (1) Butterbur Shoot (Petasites japonicus) and Miso Dip with Toast Points, and (2) Mugwort (Artemisia princeps) Cake served with Wild Mint Tea. The other two recipes in the set will be Dandelion Salad and Soba Noodles Tossed with Lemon-Garlic Fiddlehead Ferns and Field Horsetail. I'll post those pics next week.

Do you cook with wild plants? If so, please tell me what and how. Thanks!

Posted by dosankodebbie at 3:59 PM 4 comments: 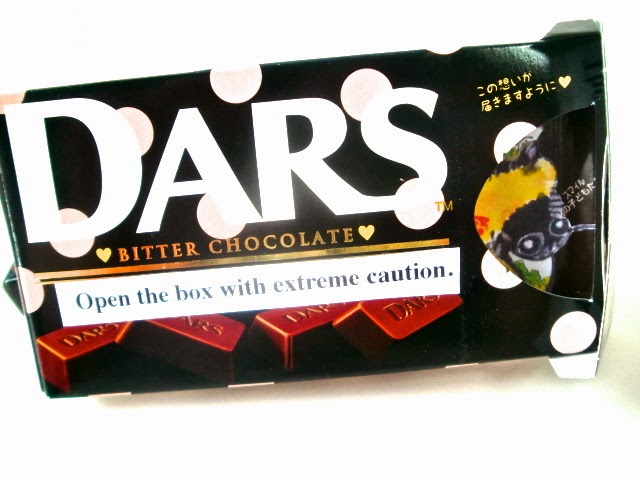 When my husband thinks that I need cheering up, he gets me a box of these chocolates. They're cheap,  readily available at super markets and convenience stores, and they are delicious! One of the fun things about this brand is that they change their box designs frequently to celebrate the changing season or new flavors-- some of them limited-time-only flavors.

Another reason I like this brand is because of the way the box is constructed. You open it by pulling back the right edge of the box, and it can be re-closed. The bite-sized pieces of chocolate sit on a small, stiff-paper tray that can be pulled out and pushed back in. Even empty, the box is stiff enough to survive being sent through the postal system in an envelope. It is perfect material for mail art.

I filled this one with bees printed from an original etegami. I inscribed one of my favorite bee-related quotes on the inside of the flap (not visible in the photos), and glued a playful warning onto the front of the box. I gave the tray of bees a three-dimensional effect by mixing flat images and images glued onto corrugated cardboard.

The box, the printer paper, and the corrugated cardboard are all previously used materials that are reused for this purpose. I make them in English and in Japanese with lots of different themes, and may even get brave enough to make them in other languages someday for my international mail art friends. 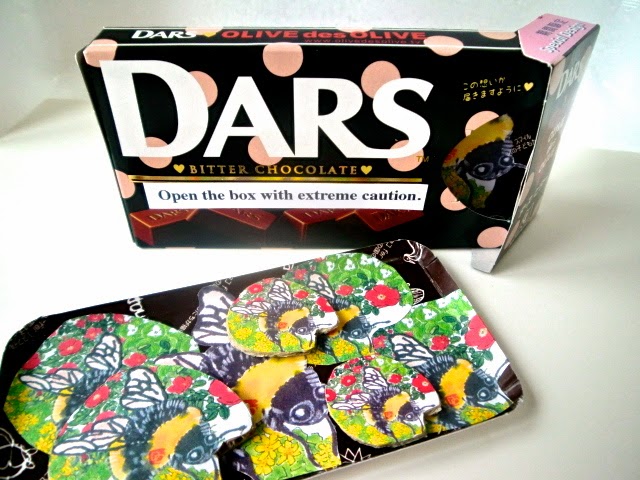 Posted by dosankodebbie at 6:48 PM 3 comments: 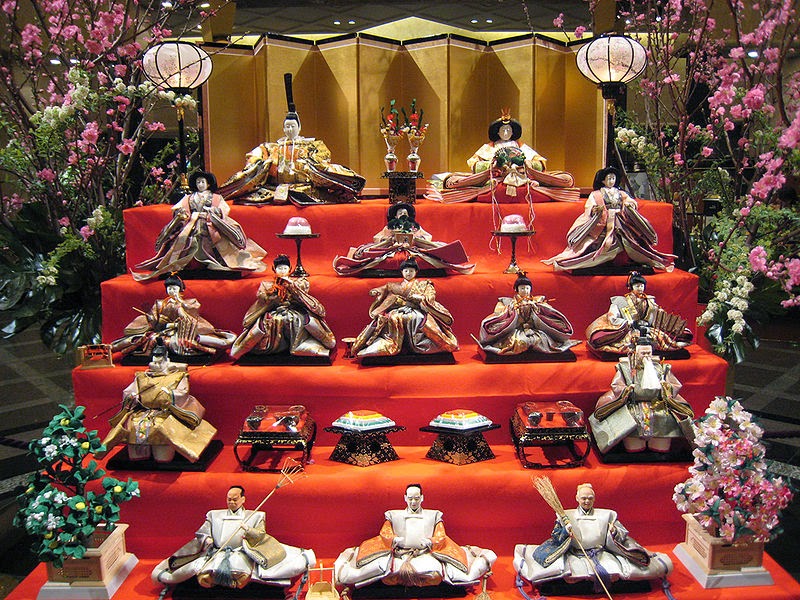 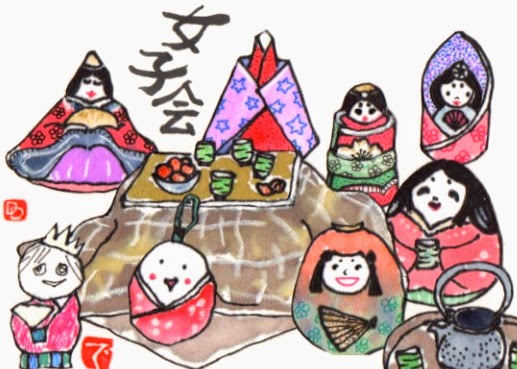 Posted by dosankodebbie at 4:41 PM 6 comments: