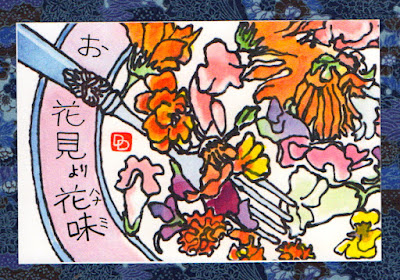 My father-in-law is an avid hiker, bird watcher, and admirer of wildflowers. He often sends me photographs of colorful flowers to inspire my etegami.

His birthday is coming up, so I asked him if he had any special requests, or did he want to take a gamble and let me surprise him. He sent me more flower photos and then added that he wouldn't mind taking a gamble.

I did make an attempt at the straight-forward approach-- using his photos as a model for painting wildflowers in their natural setting. But mischief, that constant companion of my heart, raised its tousled head, and the next thing I knew, I was painting flowers as food. As in food for the stomach, not food for the soul.

The words in the etegami shown above say o-hanami yori hanami (preferring flower-tasting to flower-viewing), a play on the same-sounding words hanami (flower-viewing) and hanami (flower-tasting). Actually, I made up the second expression by forcing together the word for flower and the word for flavor. I just can't resist wordplay, and Japanese is the perfect language for it.

The words on the etegami shown below quote a poem by haiku master Matsuo Basho. He was reflecting on fate and the fragility of life. Only, it wasn't a horse that ate the flowers. It was yours truly.  I wonder if my father-in-law will think that his gamble paid off. 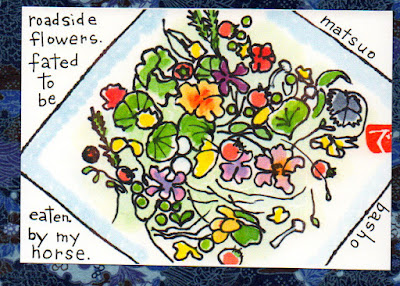 Posted by dosankodebbie at 3:20 AM 6 comments: