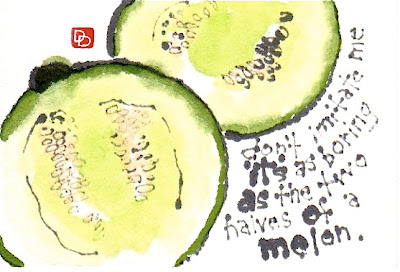 Some of you may have seen this etegami before. I considered it a "failure" when I first painted it, but it grew on me with the passing of time, and now it's one of my favorites. The accompanying words are a haiku by the wandering poet Matsuo Basho (1644-1694). Don't imitate me. It's as boring as two halves of a melon.
Posted by dosankodebbie at 2:55 PM 12 comments: 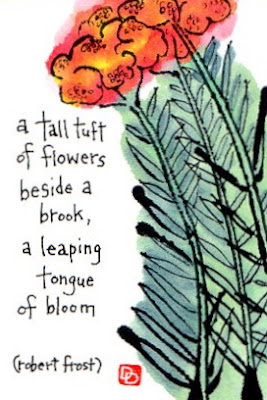 This etegami was inspired by The Tuft of Flowers, an early poem by Robert Frost. Like so many of my favorite Frost poems, it speaks of loneliness. But the second half of the poem refutes that loneliness, as the speaker (whose task is to toss the mowed grass) finds comfort in evidence of shared sensibilities and values with someone (the mower) who has left the scene. It is a long poem, so I'll just paste the second half here:

I looked for him behind an isle of trees;
I listened for his whetstone on the breeze.


But he had gone his way, the grass all mown,
And I must be, as he had been,—alone,


As all must be,' I said within my heart,
Whether they work together or apart.'


But as I said it, swift there passed me by
On noiseless wing a 'wildered butterfly,


And once I marked his flight go round and round,
As where some flower lay withering on the ground.


And then he flew as far as eye could see,
And then on tremulous wing came back to me.


I thought of questions that have no reply,
And would have turned to toss the grass to dry;


But he turned first, and led my eye to look
At a tall tuft of flowers beside a brook,


I left my place to know them by their name,
Finding them butterfly weed when I came.


The mower in the dew had loved them thus,
By leaving them to flourish, not for us,


Nor yet to draw one thought of ours to him.
But from sheer morning gladness at the brim.


The butterfly and I had lit upon,
Nevertheless, a message from the dawn,


That made me hear the wakening birds around,
And hear his long scythe whispering to the ground,


And feel a spirit kindred to my own;
So that henceforth I worked no more alone;


But glad with him, I worked as with his aid,
And weary, sought at noon with him the shade;


And dreaming, as it were, held brotherly speech
With one whose thought I had not hoped to reach.

by Robert Frost
Posted by dosankodebbie at 8:10 PM 5 comments:

Posted by dosankodebbie at 4:09 PM 5 comments:

Email ThisBlogThis!Share to TwitterShare to FacebookShare to Pinterest
Labels: shakespeare 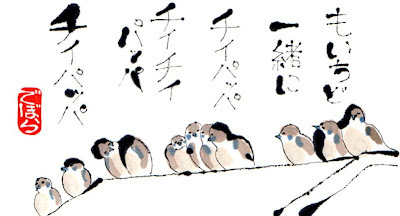 I love illustrating the Japanese children's songs that I grew up on. This one was inspired by the song Suzume no Gakkou (the sparrows' school) and begins with the line: "The teacher at the sparrow school swings his stick back and forth while chirping chii pappa." In the second stanza, the little student sparrows try to chirp as they are taught but they have a hard time getting it right.

I dipped a single bristle from a bamboo broom into sumi ink to draw this one. It was incredibly difficult to control, but that's the whole point--not to have control.  And I do get some interesting effects this way.
Posted by dosankodebbie at 1:57 AM 13 comments: 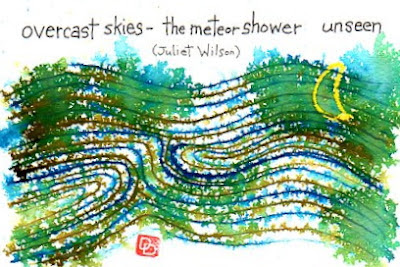 Most poetry baffles me, but this haiku by Juliet Wilson, blogger at Crafty Green Poet, struck an inner chord. It made me think of all the enthusiasm the media drummed up this year over various cosmic phenomena for which much of Japan was supposed to have front-row seats. Our particular piece of the sky was clouded over every time.
Posted by dosankodebbie at 7:37 PM 10 comments:

a week of foxes


Posted by dosankodebbie at 5:08 PM 3 comments: 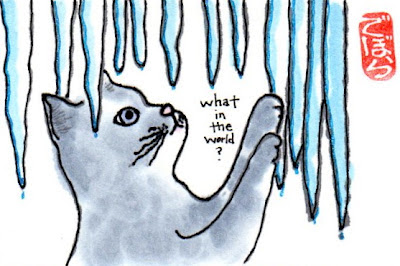 Posted by dosankodebbie at 5:23 PM 7 comments:

playing with my owl stamp 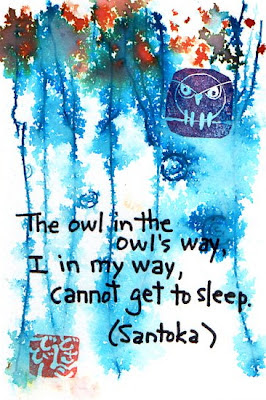 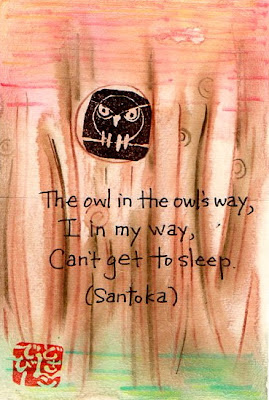 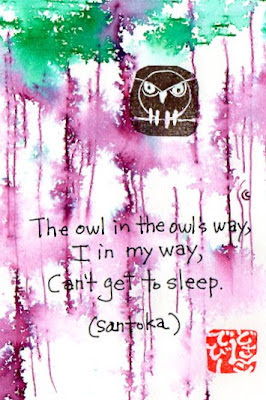 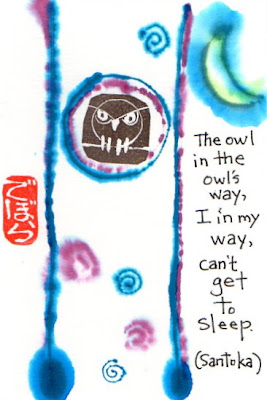 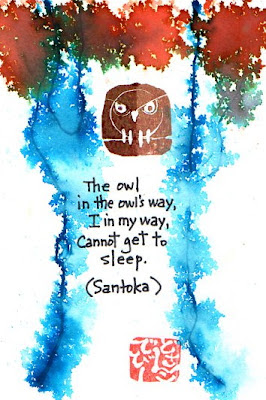 Having discovered that I collect owl paraphernalia as a hobby, a friend of mine carved an owl from a rubber eraser for me to use as a "mood stamp" on my etegami. Instead, I've been having loads of fun experimenting with it as the focal image of my etegami, trying it out against a variety of backgrounds. I've posted several examples here that share the same accompanying haiku by Santoka for easier comparison. In the spirit of even more experimentation, I used inks and methods that were completely new to me. All the originals have been mailed off to postcrossers.
Posted by dosankodebbie at 3:50 PM 12 comments: 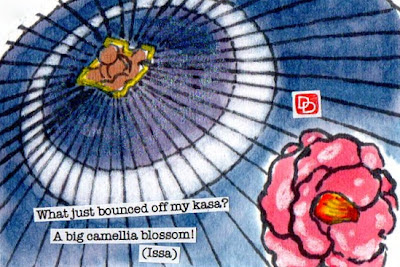 Posted by dosankodebbie at 11:16 PM 9 comments:


I can't remember when blue wasn't my absolutely favorite color. And blue goes so well with poetry, don't you think?

The first two etegami posted here were experiments with watercolor inks and watercolor paper--materials I am not at all familiar with, as strange as that may sound to you. They are rare examples of the image coming to me before the words do. But as soon as I finished painting the cat, I just knew that it was the Fog Cat from the Carl Sandburg poem Fog.

The words quoted on the blue pigeon etegami are from the poem Japanese Lullaby by Eugene Field.


The barred owl was done in the traditional etegami manner, with my trusty and true sumi ink, gansai paints, and washi paper, as suits the classic Taneda Santoka haiku. All the originals are for sale on my Etsy shop.
Posted by dosankodebbie at 3:26 PM 10 comments: