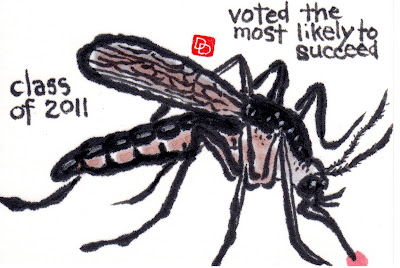 Mosquito is out,
it’s the end of the day;
she’s humming and hunting
her evening away.
Who knows why such hunger
arrives on such wings
at sundown? I guess
it’s the nature of things.

(this poem is in the public domain)

Posted by dosankodebbie at 4:38 PM 7 comments:

happy crab (on the sand, in the sun) 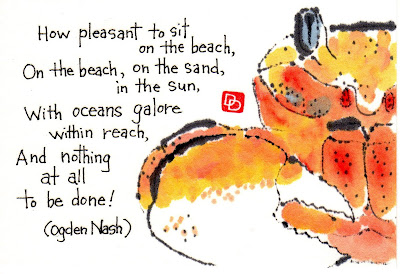 Inspired by the humorous Ogden Nash poem PRETTY HALCYON DAYS.
Posted by dosankodebbie at 1:32 AM 6 comments: 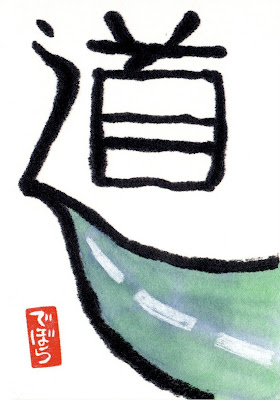 Posted by dosankodebbie at 4:35 PM 3 comments: 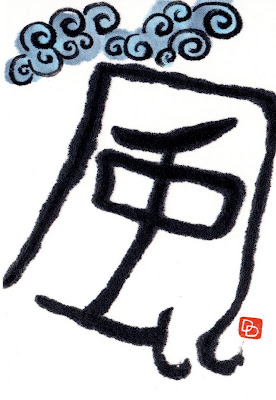 Posted by dosankodebbie at 11:24 PM No comments: 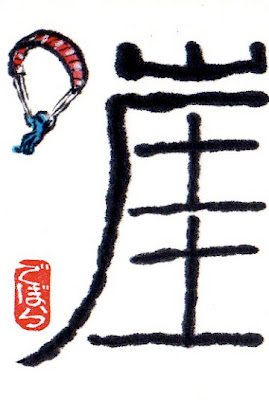 Here are two from my new series of experimental etegami. The writing (the single Japanese character at the right side of the image) means "cliff," and I used the shape of it to represent exactly what it means. In one, a paraglider launches from the cliff. In the other, a ladybug does the same. Some of you know that I use a ladybug as my avatar, so if you suspect this leaping ladybug represents me, you'd probably be right.
Posted by dosankodebbie at 8:43 PM 16 comments: 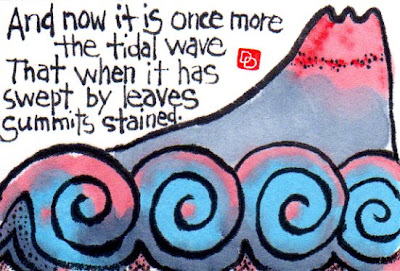 My first idea for this week's Illustration Friday (topic= "swept") resulted in this etegami. But then I got to wondering if it was too grim. Besides, it needs a lot of explaining, and it really fits better in my "humanizing the quake" series.
It was inspired by the last lines of the Robert Frost poem below (published in 1928, in a collection called West-Running Brook). The poem may or may not have been written in response to the great Misssippi River flood of 1927, which killed and displaced thousands of people. Apparently some of the politics that followed the disaster were quite ugly. Reading about it naturally made me think of the current bickering and power struggles within our Japanese government-- at such a time as this, when unity is so desperately needed for rebuilding the country.
The 3.11 tsunami left stains on the walls of the few buildings it did not destroy or carry away. But I feel that it also left stains on the "summits" of government politics. These stains are not pretty. I don't claim to understand much about Frost's poem, but I was deeply affected by his images of blood, flood waters, and stains.
The Flood
Blood has been harder to dam back than water.
Just when we think we have it impounded safe
Behind new barrier walls (and let it chafe!),
It breaks away in some new kind of slaughter.
We choose to say it is let loose by the devil;
But power of blood itself releases blood.
It goes by might of being such a flood
Held high at so unnatural a level.
It will have outlet, brave and not so brave.
weapons of war and implements of peace
Are but the points at which it finds release.
And now it is once more the tidal wave
That when it has swept by leaves summits stained.
Oh, blood will out. It cannot be contained.
poem by Robert Frost
If you haven't seen the one I finally posted for Illustration Friday, it's here. At least Tolkien fans will love it. :p
Posted by dosankodebbie at 4:07 PM 3 comments: 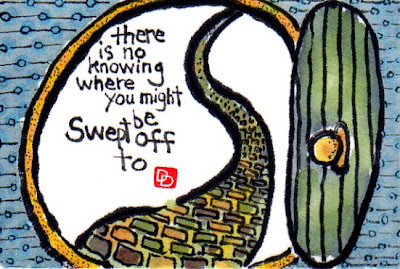 "It's a dangerous business, Frodo, going out of your door," he used to say. "You step into the Road, and if you don't keep your feet, there is no knowing where you might be swept off to." ~J.R.R. Tolkien, "Three Is Company," The Lord of the Rings: The Fellowship of the Ring, 1954
If you'd like to see the first etegami that I painted in response to this week's topic "swept," click here. Robert Frost fans might appreciate it best. : )
Posted by dosankodebbie at 4:37 AM 6 comments: 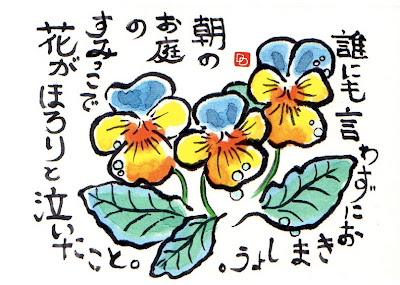 Dewdrops
I will keep it to myself
that the flowers were shedding tears
in a corner of the garden
this morning.
If the news were to spread,
and the bees were to hear of it,
they would feel so guilty,
they might return the honey.
poem by Misuzu Kaneko
my translation
Posted by dosankodebbie at 4:43 PM 4 comments: 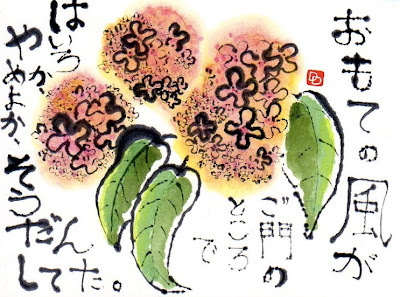 Sweet Osmanthus
The sweet fragrance of osmanthus
fills the garden.
The breezes hesitate
at the gate,
debating whether or not to enter.
poem by Misuzu Kaneko
my translation
Posted by dosankodebbie at 8:33 PM 2 comments: 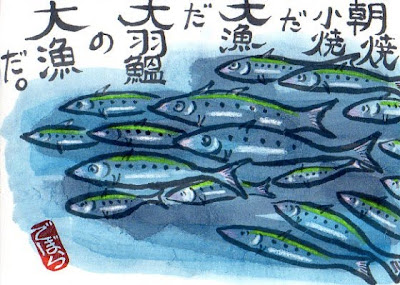 I recently became a fan of poet and songwriter Misuzu Kaneko. I had long been aware of her poems for children, but until recently I had never wondered about the poet herself. Now that I know more about her, I am hit harder and more deeply by her works than I was before.
Like the butterfly in the previous post, this was painted on a double-sized washi card that I've been experimenting with lately. It doesn't have the same bleed factor as my usual brand, but I'm trying to learn how to use it to its full potential.
I've tried to translate the short poem that inspired today's etegami, but I haven't been able to capture the rhythm of the Japanese words, or convey the unsentimental pathos of the original. I will keep working on it. But the meaning goes something like this:
The Big Haul
Beneath a glowing sunrise,
the fishing boats return,
loaded with Ooba Sardines.
On shore, villagers celebrate like it's a festival.
In the sea, sardines hold a funeral
for their tens of thousands of mates.
Posted by dosankodebbie at 4:19 PM 3 comments: 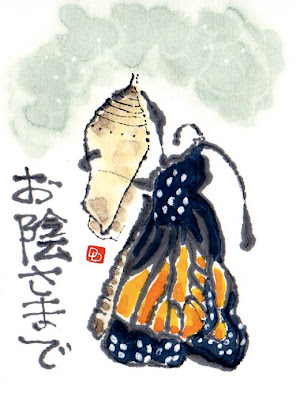 I was trying to show a butterfly (a Monarch butterfly, actually) just coming out of its chrysalis, its wings still wrinkled and wet. But what does this have to do with our topic? Well, the Japanese words say Okage-sama-de, which is a common response we make when someone asks after our health or expresses gladness for our good fortune. We often use the term simply as a polite, all-purpose, "Thank You."
Kage means shadow or shade. And what the whole phrase literally means is "I owe it to your honorable shadow (or the shadow of God or various un-specified people) that things are well with me." I like this phrase a lot, and I think about its original meaning every time I use it. Because I mean it. The good things in my life, from start to finish-- they are all okage-sama-de.

Posted by dosankodebbie at 3:51 PM 14 comments:

Some of you may remember that I participated in The Sketchbook Project last year, and that I filled my sketchbook with etegami illustrating the roughly 50 proverbs and sayings that resulted in my Japanese Proverbs series.
The Sketchbook Project was so much fun and satisfying to participate in, that I decided to try it again this year. There are various rules you have to follow, and one of these is that everyone has to submit their artwork in the same type of sketchbook-- a small-ish, blank notebook that gets sent out to all registrants by the Sketchbook Project headquarters.
This year I will be filling the sketchbook with my illustrated translations of Ainu folk tales. The Ainu are the indigenous people of northern Japan, and if you've ever checked out my Project Uepeker blog, you know that I'm part of a team that has been working for over a decade to make Ainu oral literature accessible to English readers.
The etegami posted here is one of my illustrations for a folk tale called A Song Sung by the Otter God. I still have to decide what words to put on it. Probably Ainu words taken from the story. The English translation of the story will fill up all the space in the notebook that the illustrations don't fill up.
I plan to post more samples from my sketchbook as it takes shape. I hope it will be fun for you to follow along.
Click the Sketchbook Project banner in the sidebar to learn more about it. Maybe you'll decide you want to participate too. : )
Posted by dosankodebbie at 3:22 AM 5 comments: