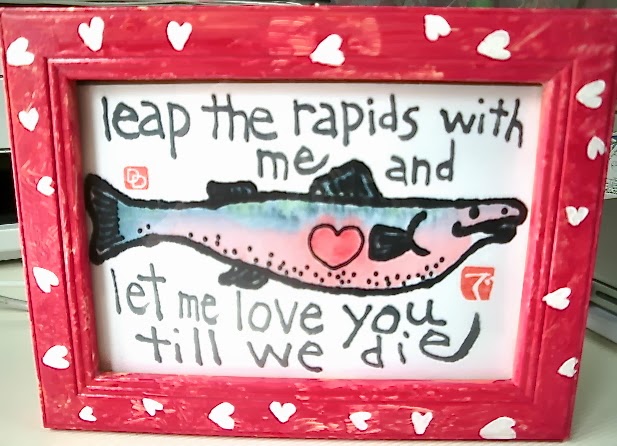 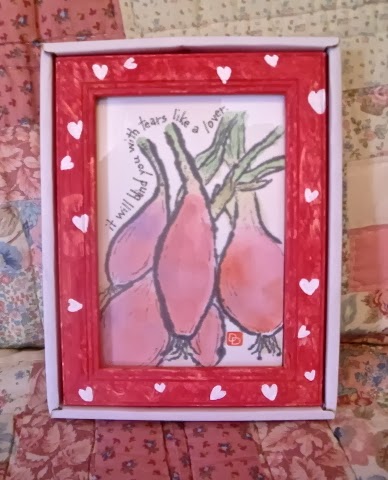 I painted this frame with Valentine's Day in mind. Hearts and the color pink are not my usual style, but I kind of like this frame. Heh heh. Next thing you know, I'll be dotting my "i"s with little hearts. Oh dear oh dear.
Posted by dosankodebbie at 9:13 PM 1 comment: 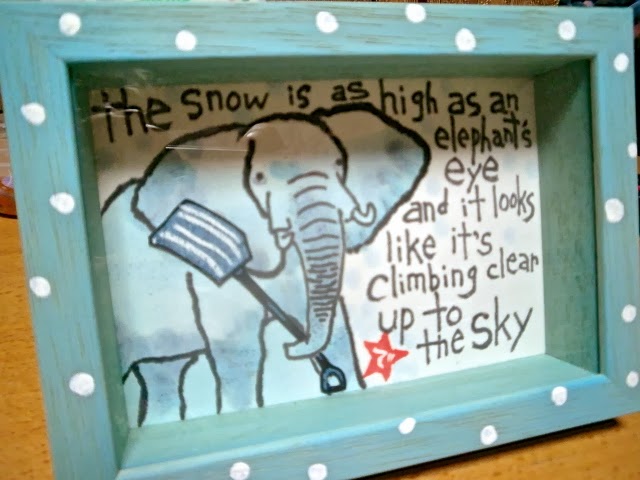 My first hand-painted frame, with the etegami that inspired it, is now listed on my Etsy shop. Maybe it will ease the agonies of winter. https://www.etsy.com/listing/177332784
Posted by dosankodebbie at 2:57 PM 2 comments: 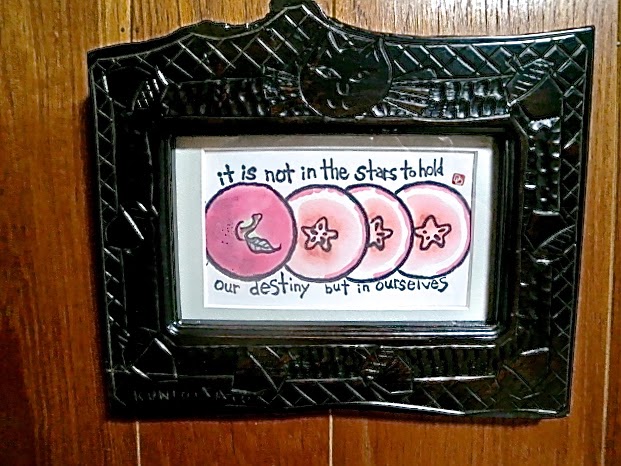 For many reasons, I've always felt that framing my artwork before shipping them overseas was not an option for me. But when I see the photos that thoughtful customers send me after they've gone to a lot of trouble and expense to have my work professionally and elegantly framed, some vague discontent stirs in my soul. This is no less true of the frames I commonly find in Japan.

So, this year, I've decided to take a big leap and experiment with designing frames specifically for my etegami. The two frames pictured here are ones that were made for me ages and ages ago by very creative people in other fields--people who don't normally make frames. They inspire me and make me want to try it for myself. My frames won't be professional or elegant or anything like that. But they will be me. Just like the etegami. 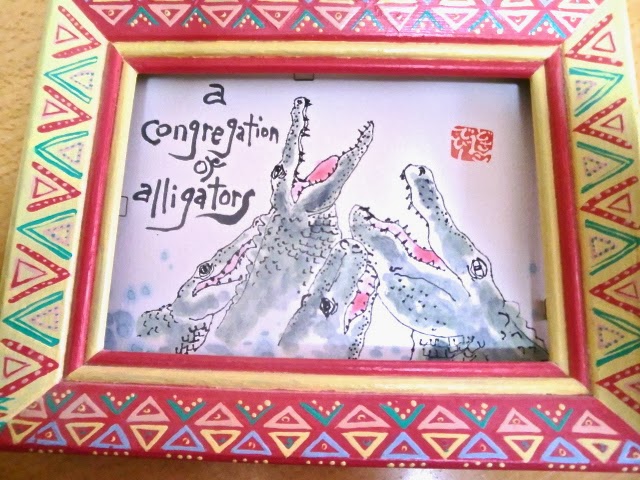 Posted by dosankodebbie at 4:18 PM 6 comments:

you're the pickled plum in my rice ball 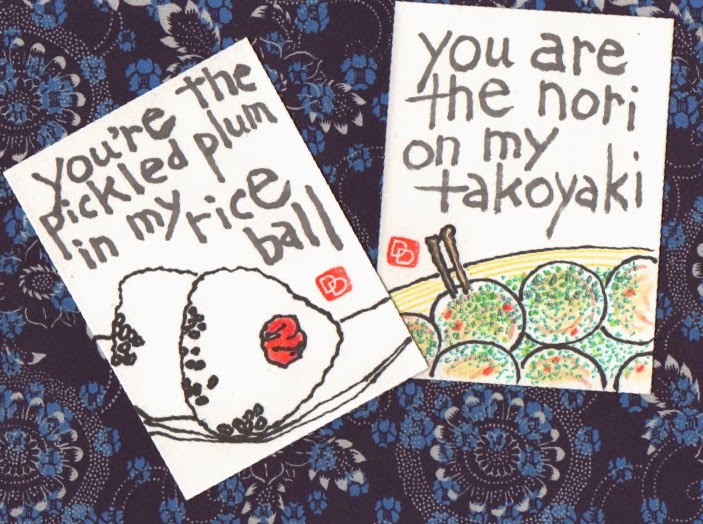 Do you think this is getting out of hand?

Posted by dosankodebbie at 7:48 PM 5 comments: 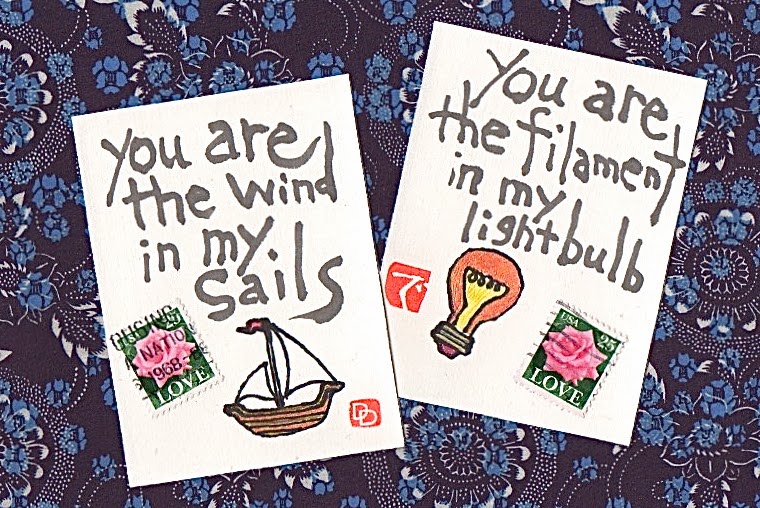 With these last two mini-cards, I've used up my stock of used "love" stamps. (sigh...). Hey! I have an idea! If you happen to have any old "Love" stamps lying around and are willing to send them to me, I'll make and send you your own mini-Valentine card, to keep for yourself or to send to someone else. My postal address is in the box at the top of my mailart gallery blog.

corny valentine cards for my family 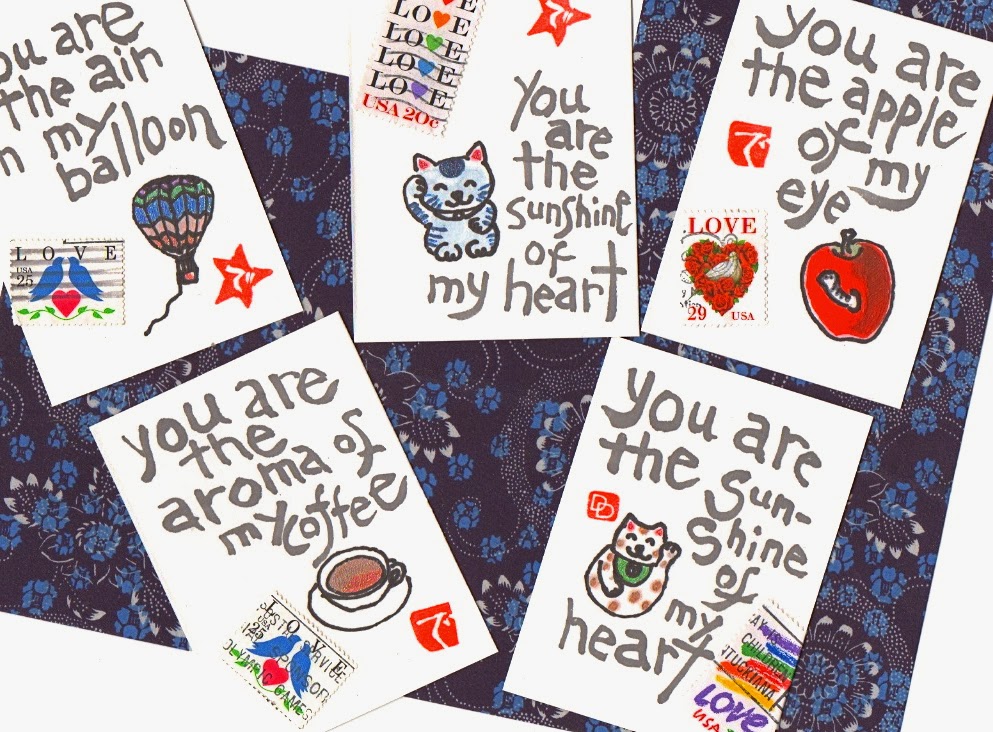 Every once in a while I get inspired to use old postage stamps to make etegami collages. Today I was sorting through some nearly forgotten art supplies and came across a bunch of used American love-themed stamps. I immediately whipped up some very simple, half-sized (3 x 2 inches), somewhat corny, Valentine cards. The furthest thing from Great Art, but something fun to give my nearest and dearest. I used sparkly gel pens for the colored parts, but you can't tell from the scanned image.
Posted by dosankodebbie at 7:46 PM 6 comments:


Posted by dosankodebbie at 6:33 PM 3 comments: 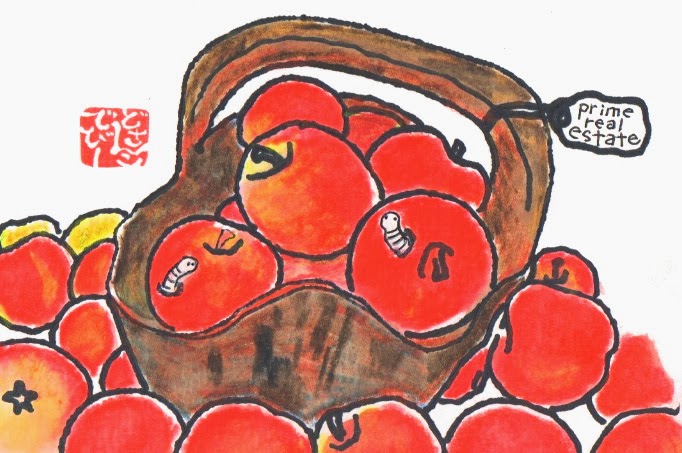 I'm thinking this would make a cute housewarming gift or change-of-address card. I've painted wormy apples before, but not with such a cheery message.

Posted by dosankodebbie at 8:20 PM 4 comments: 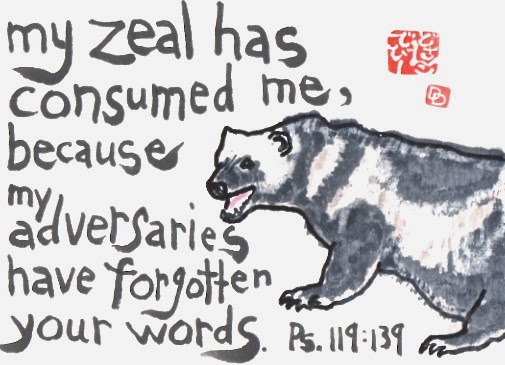 My husband's birthday is just around the corner, and since I've been painting animals like one possessed, I thought I'd do an animal etegami for him this year. Problem is, he doesn't coo over cats or dogs or turtles or horses or pandas... not even baby pandas!

So I asked him if there was any animal he felt an affinity for. He thought for a while, and surprised me with his reply. "Wolverine," he said. "...because they are feisty and don't back down from opponents that are bigger than they are."

Posted by dosankodebbie at 3:21 PM 4 comments:

THE CHARM OF JAPANESE CUISINE-- EXPRESSED IN ETEGAMI. SPONSORED BY THE MINISTRY OF AGRICULTURE, FORESTRY, AND FISHERIES, IN CELEBRATION OF THE UNESCO DECISION TO REGISTER JAPANESE CUISINE AS AN INTANGIBLE CULTURAL HERITAGE OF THE WORLD.


AS THERE IS PAPERWORK INVOLVED WITH THIS CALL, I WILL BE ORGANIZING SUBMISSIONS FROM OUR GROUP AND WILL SUBMIT ALL WORKS ON BEHALF OF THE ETEGAMI FUN CLUB IN ONE LARGE ENVELOPE. YOUR NAME AND COUNTRY WILL BE WRITTEN ON THE DOCUMENTS, AND IF YOU RECEIVE AN AWARD, I WILL NOTIFY YOU AND SEND THE AWARD TO YOU AT MY OWN EXPENSE.

I recommend your sending your submission to me in an envelope, with your name and address written on both the envelope and the back of your etegami.

TO BE INCLUDED IN OUR GROUP SUBMISSION, YOUR WORK MUST REACH ME BY FEBRUARY 1. 2014. THE WORKS WILL BE "JUDGED" IN TOKYO BEFORE THE END OF FEBRUARY, AND THERE WILL BE AN AWARDS CEREMONY IN MID-MARCH. AS USUAL, THE WORKS WILL NOT BE RETURNED. SEND YOUR SUBMISSION TO ME AT :

If you live in Japan and would rather participate in the call directly, go to this LINK (in JAPANESE) EXPLAINING THIS ETEGAMI CALL: http://www.wa-shoku.co.jp/form.php
Posted by dosankodebbie at 5:30 PM No comments: 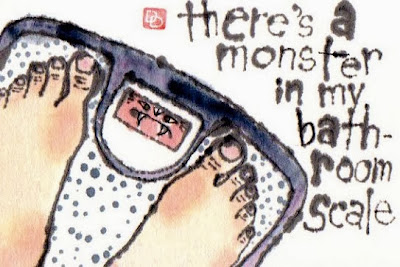 This is an old etegami, but some things never change, do they?
Posted by dosankodebbie at 5:56 PM 6 comments: 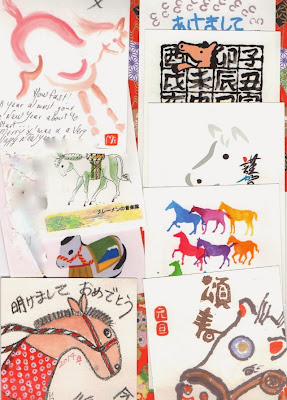 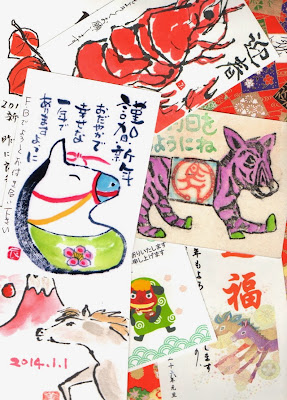 Posted by dosankodebbie at 3:28 AM 7 comments: