an ode to the tax code

Ode to the Tax Code
by V. Patschke

If your taxable income is:
The spectrum of colors in the rainbow
Your tax is:
Indigo

If your taxable income is:
A 100-piece symphony orchestra
Your tax is:
Flutes and violins

If your taxable income is:
Geometry
Your tax is:
Triangles

If your taxable income is:
The gift of superpowers
Your tax is:
Invisibility

If your taxable income is:
A bountiful feast
followed by mouthwatering desserts
Your tax is:
Indigestion
followed by a period of fasting

If your taxable income is:
Eight hours of sleep
with lovely dreams
Your tax is:
Loud snoring
with two trips to the bathroom

If your taxable income is:
Unconditional love from family and friends
Your tax is:
Less frequent letters and
fewer phone calls

If your taxable income is:
Peace and prosperity
Your tax is:
A period of political chaos
and discontent

In applying rulings
and procedures
published herein,
the effect of subsequent
legislation,
regulations,
court decisions,
rulings, and
procedures must be
considered.
All taxes are due
on the 15th of April.
In the event of late payment
A 25% fee
and 25 grey hairs
will be applied.
Posted by dosankodebbie at 9:11 PM 3 comments:

the fascinating world of niboshi 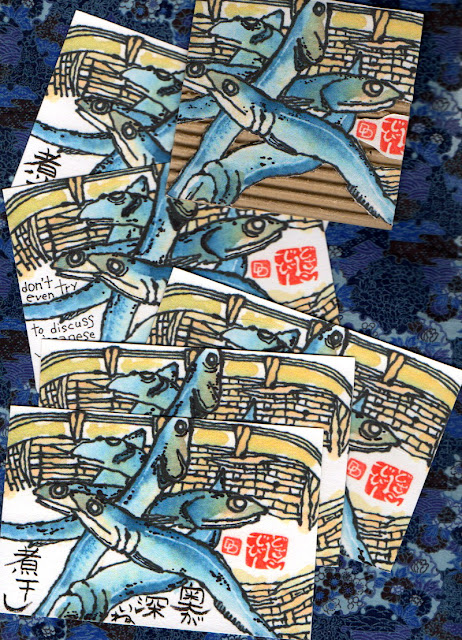 You can hardly discuss Japanese cuisine without mentioning niboshi, the dried baby sardines used in making one of the most common varieties of dashi, the ubiquitous soup stock that flavors such a great variety of Japanese foods.

Here's a Wikipedia link, but if you just google niboshi (also called iriko), you'll find so much more information than Wiki offers about this little package of big flavor.

Even so, I wouldn't have been inspired to paint an etegami of these bone-dry, misshapen creatures if I hadn't met someone on Instagram who lives and breathes niboshi.

When I say she lives and breathes niboshi, I mean she's stuck in a room full of them all day, every day. It turns out that she married into a family that produces kanbutsu, a catch-all term that means dried foods used in traditional Japanese cooking, such as vegetables, seaweed, noodles, and fish. I get the impression that the main product her family business deals with is niboshi. For seventeen years she has sorted  thousands of these dried fish each day, picking out the occasional rock or wrong sort of fish that gets overlooked during the several stages of preparing these things for the market.

As is true of so many businesses that produce traditional products, the customer base of my friend's company has aged and dwindled without being successfully replaced by the next generation-- a generation that prefers Western food culture. Other companies in the same boat have tried attracting younger customers by developing westernized versions of niboshi recipes and printing them on the backs of their packages. But cooking is not a talent my friend feels she has. Alas.

So. What can she do to help out the family business? She thought about all the funny-looking fish and other odd things she comes across while sorting niboshi every day, and it occurred to her that people might get a kick out of seeing pictures of them on Instagram. At least it would help publicize this traditional food product to those who are unfamiliar with it.

That's how her Niboshi Monster photos were born. She finds fish babies -- not just sardines but other sea creatures that get mixed in and have to be sorted out-- and she arranges them into scenes that tell a story. I'm totally hooked on them, and eagerly await each new photo.

The best I can do is share the following photos-of-her-photos, but you can see them much better if you click here to go to her page on Instagram.

Posted by dosankodebbie at 9:36 PM 2 comments: 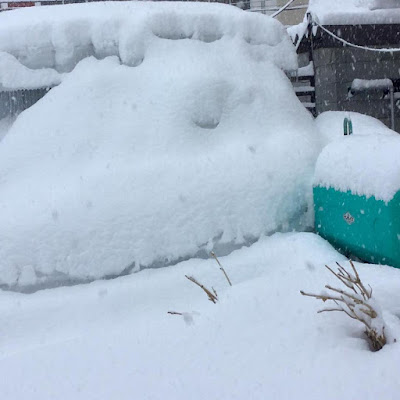 Since you don't look out of my window every day like I do, you probably can't tell that this is a photo of spring. But take my word for it; it contains many significant differences from a photo taken through the same window in winter.

For one thing, the heavy cover of snow has broken up enough that you can see an exposed corner of our garage. For another, the four long legs which hold up the blue-green kerosene tank are still hidden in the snow, but the tank itself is no longer buried.

And most importantly, some of the branches of our huge but temporarily squashed hydrangea bushes are sticking up out of the snow. If you look carefully, you will see that there are leaf buds on the otherwise bare branches. It may be two or more months before the leaves actually unfold, but the buds are definitely there.

Welcome to March in Hokkaido.

if you look really hard 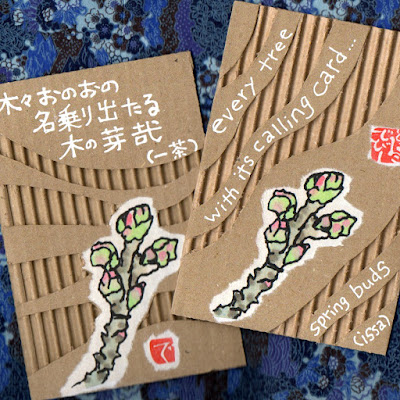 Our part of Hokkaido is still covered in a white, white, white blanket of  snow. By early April, the snow will have melted enough to make out buds of crocuses and butterbur peeking out through the thinning crust. But for now, there is no sign of anything green, anything growing, anywhere.

Wait! Wait a minute. I take that back. Look real hard. Reeeeeaaaaaal hard. Are those buds I see on the otherwise dead-looking and utterly bare branches of the bushes, half-buried in snow, at the very back of the garden furthest from the window?

Posted by dosankodebbie at 4:27 PM 3 comments: 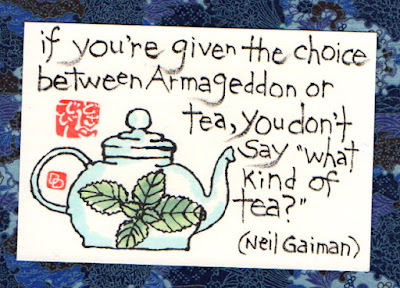 I don't know where February went. I can't remember ever missing a whole month of posting on my blog before. I was on a reading rampage-- and when I finally came up for air, it was March. And I feel wonderfully re-charged.

Posted by dosankodebbie at 2:20 PM 6 comments: