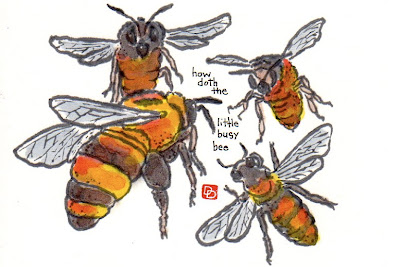 The accompanying quote is the first line of Against Idleness and Mischief, a poem by Isaac Watts (1674 – 1748), the English theologian and hymnwriter. The poem was famously parodied by Lewis Carroll in his book Alice's Adventures in Wonderland, in the poem How Doth the Little Crocodile, which is now better known than the original.

The washi I used for this piece is less soft and less absorbent than the cards I usually use, so I had some trouble getting the effect I wanted. But not being able to control the outcome is an important part of Etegami, so I shouldn't, and I won't, grumble about it. ; )

If you haven't done so already, check out my Christmas Giveaway. Deadline to enter is December 8, 2011.
Posted by dosankodebbie at 4:47 PM