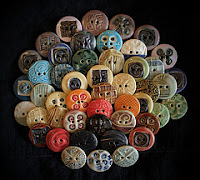 Until I met Vika, I had never considered that buttons could be works of art. Vika is an artist/craftsperson who makes buttons, pendants, and brooches from clays and metals. My ignorance probably has a lot to do with the fact that I never learned to sew or appreciate the tools and materials associated with clothes-making or fashion.

I was absolutely dumbfounded when Vika sent me some buttons she said had been inspired by my etegami (not pictured). Recently, she startled me even further with her earnest questions about the aesthetics and processes of Etegami. Her questions --and my answers-- resulted in an intriguing post on Beads of Clay, a blog for ceramic bead artists. It opened my eyes to the connections that she sees between Etegami and other Art in miniature. What do you think about the issues Vika raises?
Posted by dosankodebbie at 3:54 PM