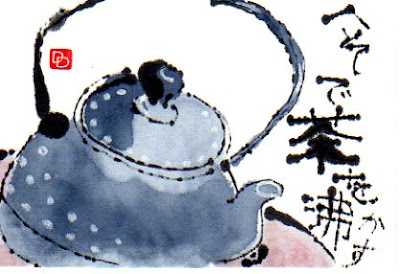 A phrase that we often hear in Japan these days is "Let's help bring back the laughter," or "Let's bring smiles back to their faces." It refers, of course, to the people whose lives were turned upside down and inside out by the recent quake, tsunami, and nuclear reactor troubles.

Miki Ando, who won a gold medal in last week's ISU World Figure Skating Championships (yaaaaay!), said she was pleased to win the medal, but what mattered most to her was helping to restore smiles to the faces of disaster survivors in the Tohoku region. And she really meant it. The sentiment is shared by every last one of us.

I've always been attracted to proverbs and sayings about laughter, and one of my favorites is the one illustrated in today's etegami. The words say "boiling tea with one's belly button." The complete concept might be explained as a situation in which one is laughing so hard that, if you put a kettle on your belly button, you could boil water for tea because it would be quivering so much. May such belly laughs soon return to North Eastern Japan.
Posted by dosankodebbie at 6:37 PM