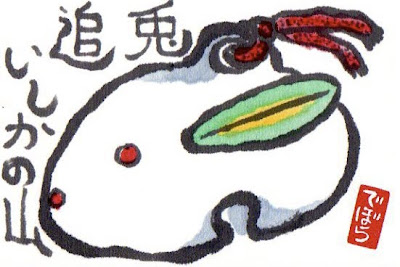 Dorei (clay bells) have a long tradition in Japanese folk art. One usually sees them in the shapes of the animals in the oriental zodiac, though they are made in other shapes as well. The zodiac dorei are often sold at temples and shrines as good luck charms, especially during the New Year season. Inside the hollow animal shape is a round ball of clay that makes a sort of clanking sound when the bell is shaken.

The etegami posted here is a sample of a rabbit dorei made in Tochigi prefecture. Tochigi is home to the famous Nikkō National Park, which was registered as the 10th UNESCO World Heritage Site in 1999.

The writing that accompanies the image translates roughly to: The hill where I once chased rabbits. It is the first line of a song called Furusato (home land), which most Japanese people know by heart. It expresses a deep fondness for, and longing to return to, the place where one has grown up. It is often sung at graduation ceremonies, was featured at the closing ceremony of the Nagano Olympics in 1998, and has actually been suggested as an alternative national anthem.
Posted by dosankodebbie at 3:53 AM

Email ThisBlogThis!Share to TwitterShare to FacebookShare to Pinterest
Labels: earthquake, humanizing the quake, rabbit, tochigi, year of the rabbit