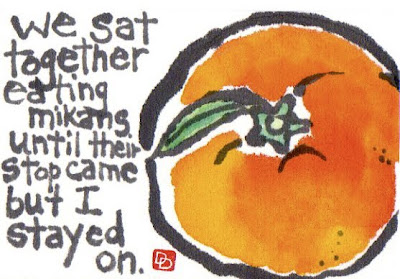 I have done a lot of train and bus travel in Japan. From the age of ten, I had to shepherd my even younger siblings on and off crowded trains on Friday afternoons to get to the far northern town in which our parents lived, and then back again on Sunday nights to the city where we went to boarding school. I would hold their hands tightly so as not to lose them in the crowd, and anxiously seek an empty seat-- or even an arm rest-- so that at least the youngest wouldn't have to stand for hours.

Later, as a teenager attending high school in Tokyo, I traveled even further and for longer periods of time, often for days and through the night. I dozed sitting up-- or if I was lucky, sprawled out-- on the hard benches of the slow train to Hokkaido, traveling leisurely through all those beautiful prefectures of northeastern Japan that were recently devastated by the quake and tsunami. Or sometimes I traveled in the other direction. Southwest to Kyushu, for example, to take a job I'd been offered for spring break. Or still other directions, and for other reasons.

In those days, travelers often shared whatever food they had brought along. Mikans (mandarin oranges) featured prominently in this ritual. Many is the time that the warm generosity of "aunties" and "uncles" saved me (and my siblings) from hunger and self-pity. Which is all background to explain why I lost my heart to a certain poem titled Mikan. It's about Lynda Shoup's experience of traveling in Niigata prefecture. You can link to it here on the Purple Glasses Club. I asked permission to quote it on my etegami.
Posted by dosankodebbie at 9:16 PM