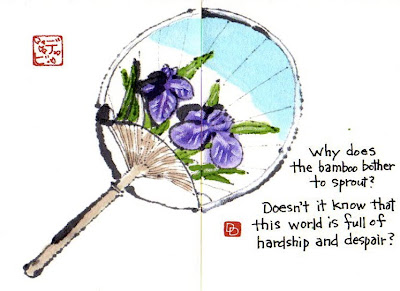 Southeast of Tokyo is Chiba prefecture, which takes up the whole of the Boso Peninsula. It is known for having fine weather year-round, and this is one reason why bamboo grows well there, and in so many varieties. Bamboo has many practical and ornamental uses, one of which is as the framework of uchiwa (round, flat, hand-held fans).

Some of the best uchiwa in Japan are said to be made in the Tateyama region, near the southernmost tip of the peninsula. They are made by cutting bamboo tubes into narrow splinters which are then splayed out in the radial shape of a fan. Washi paper is pasted over both sides of this bamboo frame.

I prefer uchiwa to the sensu (folding fan) that Western tourists often purchase as souvenirs of their Japan travels. I find that the flat fan produces a heftier breeze than the folding fan, while causing less of a strain on the wrist. Their usefulness extends throughout the year, regardless of season. We flap them over hot sushi rice to bring out the gleam of the individual grains. We use them to help get wood fires burning and charcoals glowing. I even have some small blank ones to use for painting on, etegami-style, and sending through the mail as greeting cards.

They can be used for cheering at sports and music events, as trays for serving dainty confections to go with tea, or as mats on which to place an arrangement of flowers. These days, cheap plastic-framed uchiwa, printed with corporate advertising, promotion of a cause, or announcement of a public event, are passed out at busy pedestrian crossings with the sure knowledge that few will refuse them, because everyone knows how handy uchiwa are.

(This is where I deleted a paragraph about how if the people of Japan ever needed to exercise this quality of versatility, it is now. I hoped you would make the connection on your own.)

The attached image was painted across two washi postcards. The poem quoted on the etegami is from the Kokin Wakashu, a Heian era anthology of waka poetry (905 AD). I believe the poem refers to the birth of the poet's child, and is written in tenderness and hope, rather than in despair.
Posted by dosankodebbie at 9:54 PM