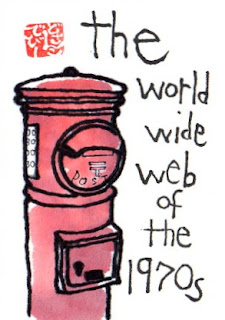 I was asked to paint a series of etegami to add some pizazz to a website that a friend had set up to be a communication crossroads for those of us who attended the American School in Japan (Tokyo) during the 1970s. The connecting theme was to be along the lines of "nostalgia" and "reunion." The first etegami I posted was excessively metaphorical, and resulted in being misinterpreted by all who saw it-- which was kind of embarrassing. The one posted here is more straightforward, representing one of those old-style Japanese mail boxes, which had so much more character than the modern ones you see in Japan today. My www of choice is still the postal service, and one of the most important reasons I do etegami at all.

Posted by dosankodebbie at 9:49 PM