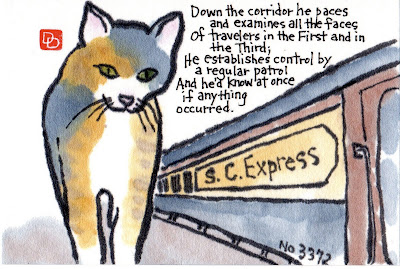 Just as I predicted in my last post, I became hopelessly caught in the grip of T.S.Eliot's Old Possum's Book of Practical Cats, and was unable to paint anything but cats for several days. After making a bunch of more-or-less traditional etegami, I redid some of them as etegami collages. I can't say I'm completely satisfied with any of them, but at least it took the edge off this obsession, and now I can go on to other things. (sigh of relief)

Posted by dosankodebbie at 5:54 PM