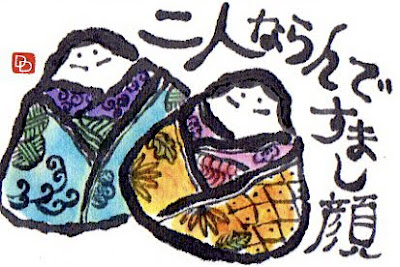 March 3 is Hinamatsuri (Doll's Day Festival) in Japan. Like Setsubun (Bean Scattering Festival), the day marks a junction in the cycle of seasons. On a superficial level it celebrates "girlhood," the way Kodomo-no-hi (Children's Day Festival), on May 5, celebrates "boyhood," but it's actually more complicated than that. There are subtle regional and generational differences in how it is perceived and celebrated. You can read about it on Wikipedia if you like.

I was going to do an etegami for Doll's Day anyway, but when I saw that the IF topic for this week was "layer," I decided to post early. This is because the first image that had popped into my mind was juuni-hitoe, the elegant, many-layered robes that only court ladies wore in Japan in ancient times. And the elegant life of ancient court nobility is what Hinamatsuri is all about.

The etegami shows an image of clam shells dressed up in bits of fabric and paint to represent the emperor and empress dolls that are displayed during the festival in every home that has daughters. Clam shells are "a symbol of a united and peaceful couple, because a pair of clam shells fits perfectly, and no pair but the original pair can do so." (Wiki)

The dots on the forehead are not eyes: they were once a cosmetic indicator of noble rank. The eyes are the slits beneath the dots. The accompanying words are a quote from the popular children's song about the Doll's Day Festival, and translate to: "They sit next to each other with prim looks on their faces."
Posted by dosankodebbie at 5:41 PM