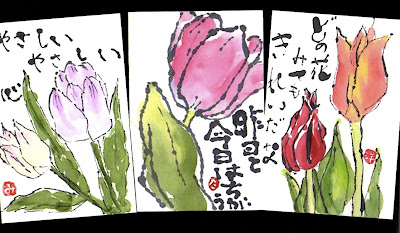 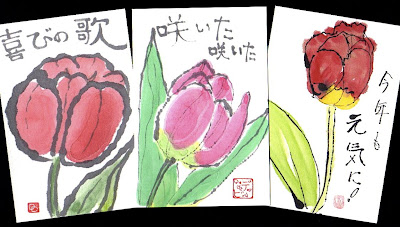 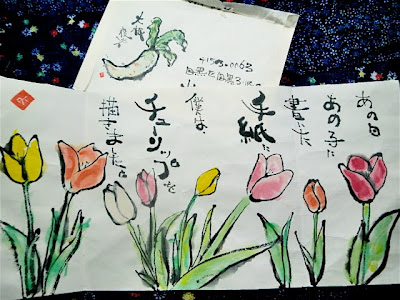 In the meantime, I hope you enjoy the colorful display of etegami tulips posted here. I'm thinking hydrangea blossoms would be a good choice for the next mini-exhibit. In Japan, they are associated with the rainy season, which will creep over Japan within a matter of weeks. But in Hokkaido, which does not have a rainy season in the same sense the rest of Japan does, hydrangeas don't generally bloom till nearly August, and then they keep blooming till our early winter comes and the blossoms freeze-dry on the bush. If you have a chance to draw hydrangea in the etegami manner this year, please send me one so I can include it in the next garden post scheduled for mid-August.
.
Tulip artists:
Michiko Shimizu, Takako Chida, Yoko Ogawa, dosankodebebbie, Ryoko Nakagawa, Yoshikazu Matsumoto
.
Posted by dosankodebbie at 7:08 PM