the fathers in our lives (part 1)

Gekkan Etegami, the Japan Etegami Society's official monthly magazine, always features Father's Day etegami in their June issue. I want to share some pages from my copy of this month's issue, to show you how a handmade Father's Day card (especially if it's etegami) beats any commercially-produced greeting card, regardless of your drawing skills. I also want you to see what the Japan Etegami Society considers to be good examples of traditional etegami. Maaaaybe you will find that the works which used to impress you the most --the ones with refined drawings and elegant writing-- are not the ones that the official etegami magazine would feature in its pages. Do you have any thoughts on why this should be so?

I'll post a few of the pages whole, and then zoom in on a few individual etegami to describe them in greater detail. 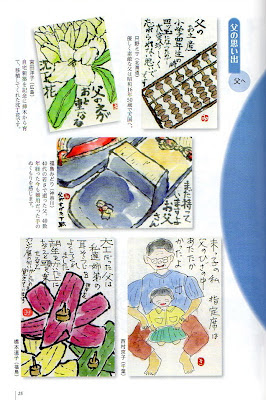 The artist remembers her father as being skilled with his hands. For this etegami, she painted a pair of her childhood clogs, one of them turned over. I imagine her father used to repair the ties of her clogs whenever they would break or come undone. The words on the card say "Father, I still have these clogs." 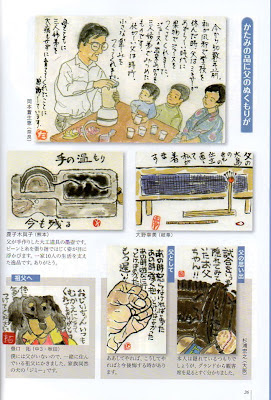 This etegami depicts a handmade tool used in traditional Japanese carpentry that the family has kept as a memento of their father. The artist remembers fondly how her father supported his large family with his carpentry skills. The words on the card say "It still conveys the warmth of your hands." 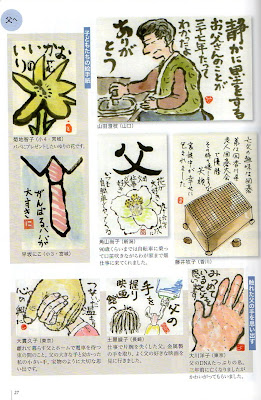 The artist's father loves to play igo, the Japanese version of checkers. The words on the card speak of the day her father won their prefecture's annual senior citizen's tournament. She says the smile on her father's face wrapped her whole family in happiness. 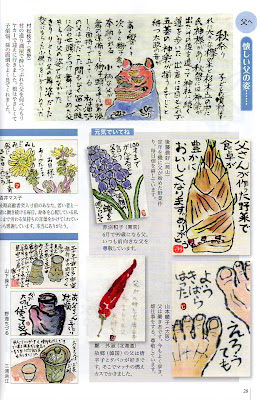 The words on the card say "Our dinners are delicious and plentiful, thanks to Dad's homegrown vegetables." 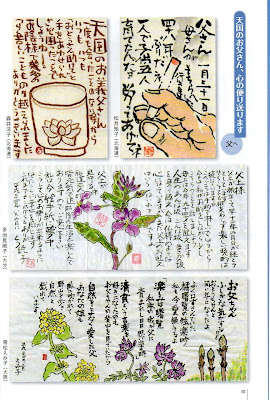 The card says "You died and went to heaven before we ever met, and yet I'm always bothering you with prayers for help. It's thanks to you, Father-in-law, that we've been able to overcome some difficult times." You may wonder how she can send a Father's Day card to one who is no longer living. She will probably set this card on the household altar where the family ancestors are worshiped. 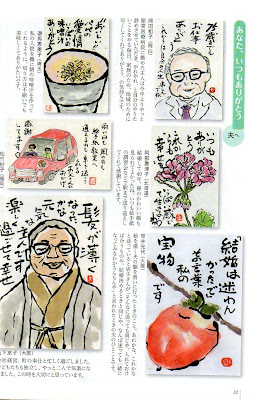 The woman who painted this etegami tells of the day she went shopping for a picture frame for her artist husband. She wasted a lot of time because she had so much trouble making up her mind. She went home and explained this to her husband, who responded with the words she quotes on this card: "I never had the slightest doubt about who I wanted to marry, you said to me. I will always treasure those words."

So far we've seen cards drawn by sons and daughters for their fathers, a daughter-in-law for her father-in-law, and a wife for her husband. Finally, I want to show you a card that a father drew about himself, probably for his son. It shows a fist, and it says "If only I hadn't hit you that day. If only I had given you a big hug instead. If only that day, I had taken you out to play. Now it's too late!" Perhaps his son has died. Perhaps they are just estranged from one another. If they are only estranged, I hope he will send the card to his son. Would you find a card like this at Hallmarks?

Posted by dosankodebbie at 12:00 AM