new hens on the block 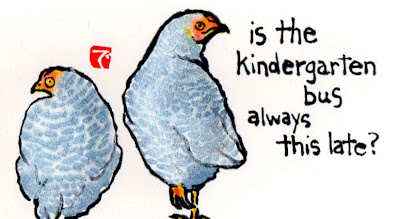 This simple etegami was inspired by a photograph I found on studiololo's blog. It shows some hens with beautiful plumage, and the caption explains that they are the newest hens on her friend's farm. I was initially attracted to the lovely feathers, wondering if it was possible to reproduce them in an etegami. But as I continued to observe the photo, my mind built up a whole background story in which these hens played a central role.

The appearance and the posture of the hens made me think of certain young urban mothers in Japan who move into a new neighborhood. These young mother hens are very fashion-conscious. They are desperate to fit in with the popular mothers of the new neighborhood. They wear their full make-up and their jewelry even to meet the kindergarten bus.

In order to make a smooth adjustment into the new community, they have to learn (without being told) all the subtle rules of the playground, and the kindergarten bus, and garbage pick-up, and the "pecking order" of the women's community. It would be enough to make me move to the South Pole. But I have always ignored that stuff, because I am accustomed to not belonging and I can live with it. To many young mothers, though, it's a huge thing. Women have lost their sanity, attempted suicide, even homicide, because of the stress, and this phenomenon is often depicted in Japanese TV dramas.

Posted by dosankodebbie at 2:18 PM