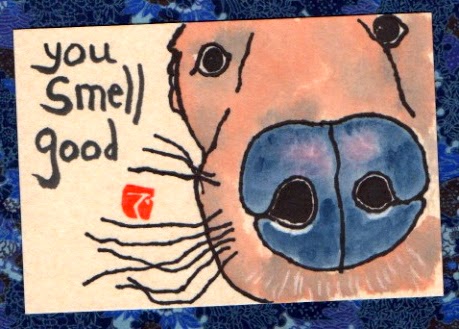 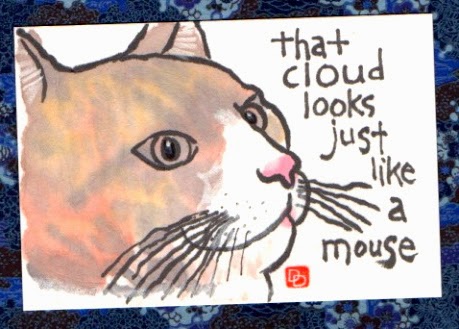 These images will be going into my new Etegami Cats and Etegami Doggies desk calendars for 2015.

Posted by dosankodebbie at 4:02 PM 2 comments: 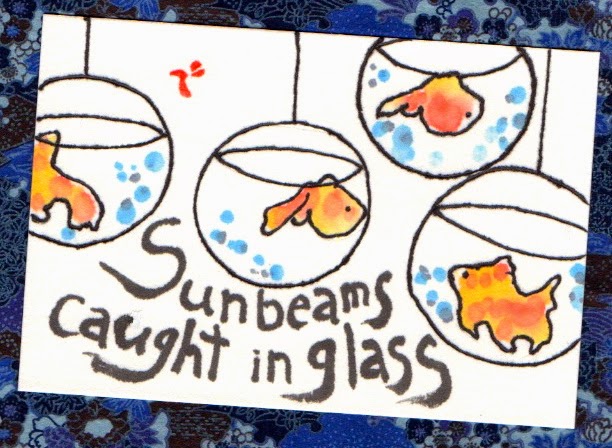 Inspired by the Showa era goldfish vending stalls. These were most often set up along the approaches to local shrines and temples with dozens of other specialty stalls that enlivened summer festivals in Japan (and still do). Back then, the glass globes (miniature goldfish bowls) hung from bamboo slats under the eaves of the stall-- a prop to make customers feel cooler in the sultry evenings of high summer, I think.

Other goldfish are sold from tanks set on the ground, and children pay for a chance to scoop them up with plastic-framed paper scoops that usually get soggy and tear before they can catch any fish. So they pay for another scoop. And another. As long as the coins that are clutched in their sweaty little palms last.
Posted by dosankodebbie at 6:08 PM 1 comment: 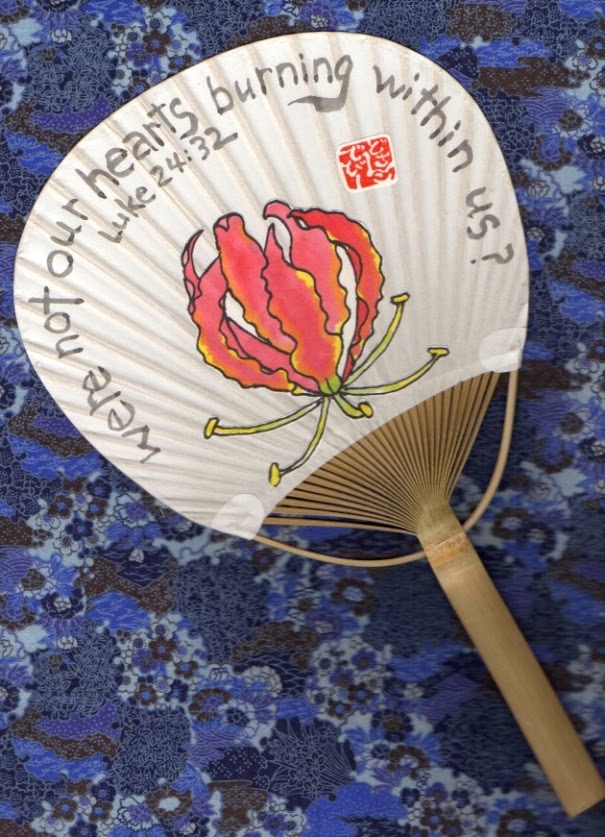 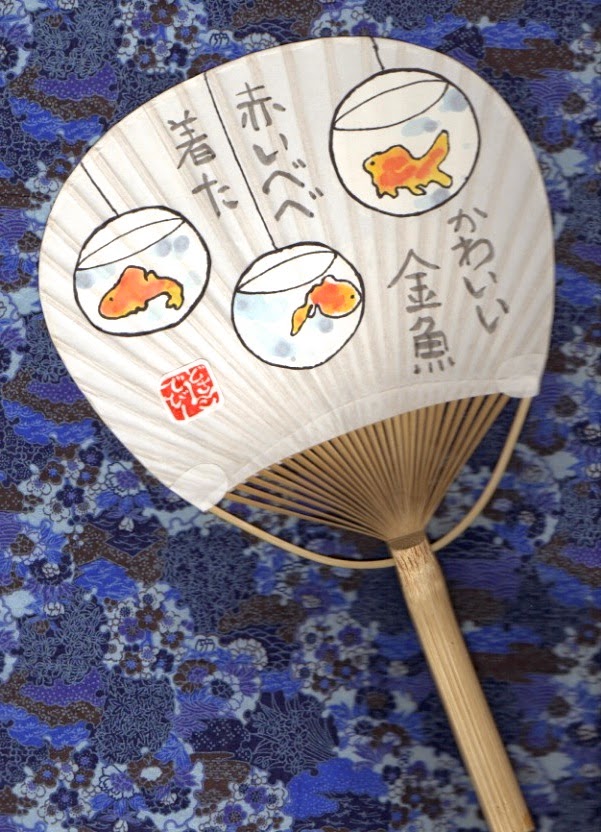 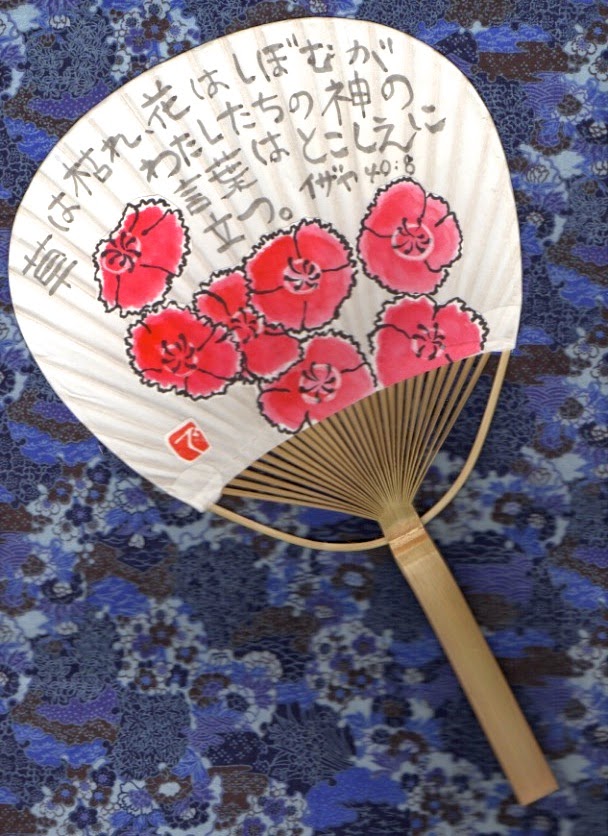 the bird, the bell, and me (misuzu kaneko series #5) 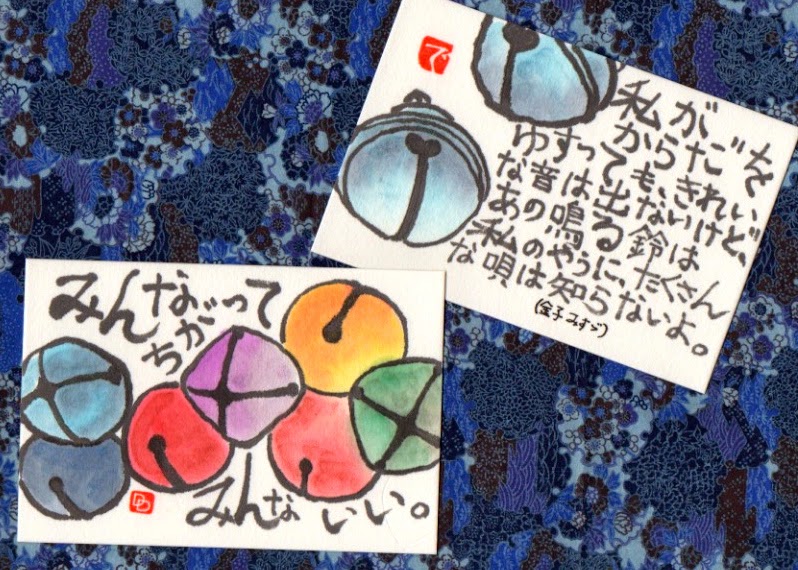 The Bird, The Bell, And Me
by Misuzu Kaneko
translated and illustrated by dosankodebbie

Though I hold out my arms as wide as I can,
I can never soar the skies;
A little bird can do just that,
yet not run as fast as I can.

Though I jiggle my body from head to toe,
I can't make pretty sounds;
A tinkling bell can do just that,
yet not know as many songs as I do.

The bell, the bird, and then there's me;
each of us different, and each of us good.
Posted by dosankodebbie at 4:18 PM 4 comments: 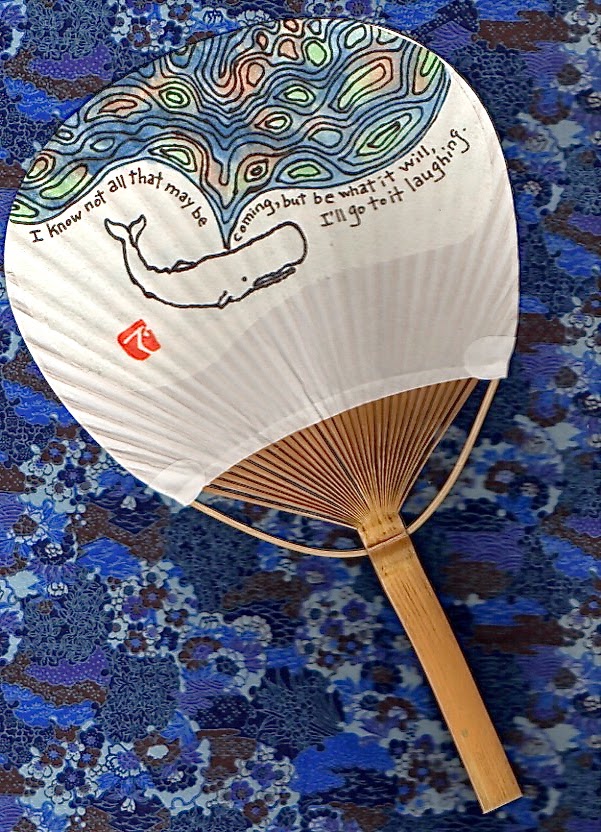 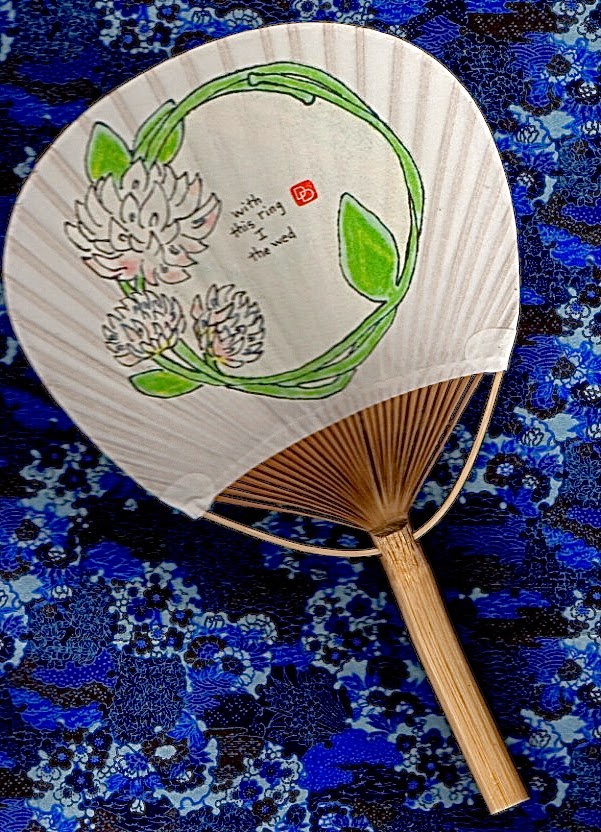 I'm almost ready for summer! (ps: I fixed the misspelling on the clover fan after I took this photo. embarrassed.) 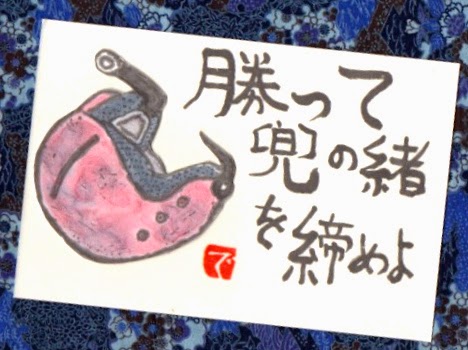 Posted by dosankodebbie at 6:00 PM 3 comments: 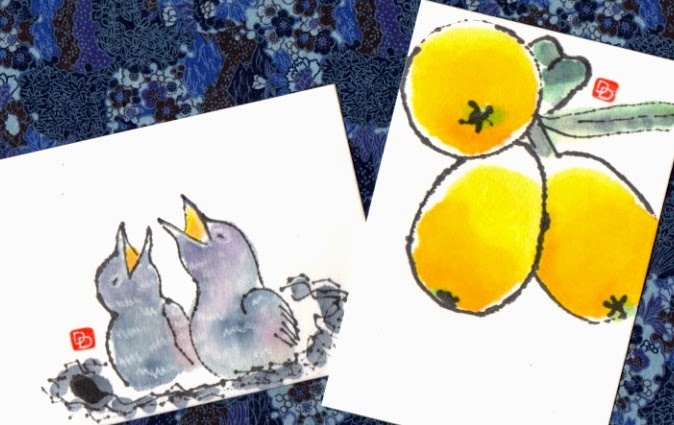 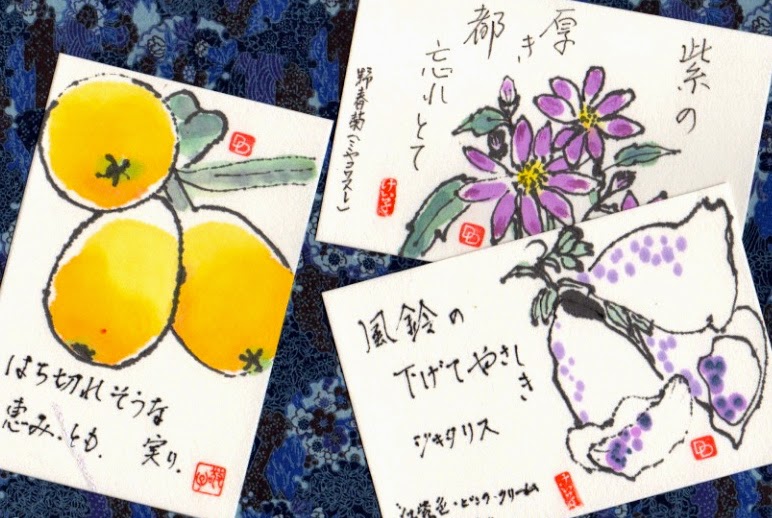 Posted by dosankodebbie at 1:27 AM 13 comments: 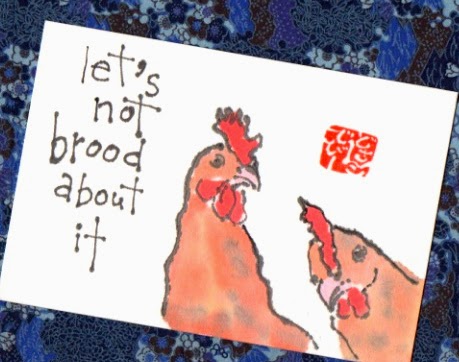 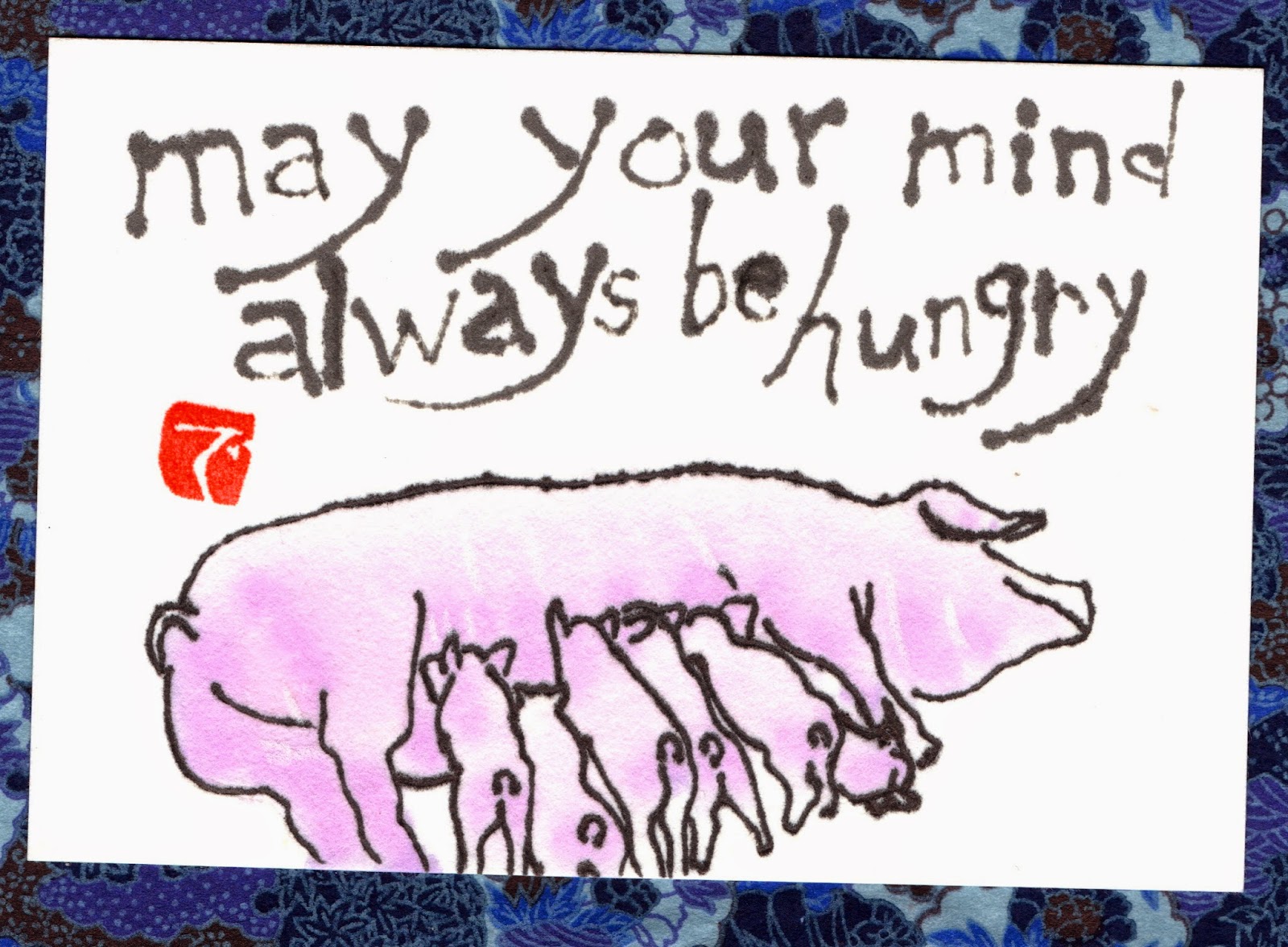 I've enjoyed the feedback many of you have given me on my barnyard series. I'm sorry I haven't been able to respond to them all.  So far I've got goats, lambs, ducklings, barn owls, chickens, donkeys, cows and cow pats!, cats, pigs, and others I can't remember right now. Oh yeah, I'm working on honey bees too! My barnyard calendar is almost complete. (happy dance)

Husband: I'll be hiking the Tengu-dake and Anadaki Falls area today. That's where I ran into the bear last year. (excited, hopeful) Of course, that was in May.... (wistful, doubtful).

Me: Well, if you get eaten by a bear it would make an interesting ending to your biography.

Husband: You planning to write my biography?

Me: Well, an etegami biography. Maybe.

Husband: If my life inspires you to make etegami, then it will all have been worth it. (there's a gleam in his eye. humor? sarcasm?)

As soon as he walked out the door, I grabbed a piece of cardboard and some watercolor pencils, and drew an etegami. I just can't resist a challenge.... 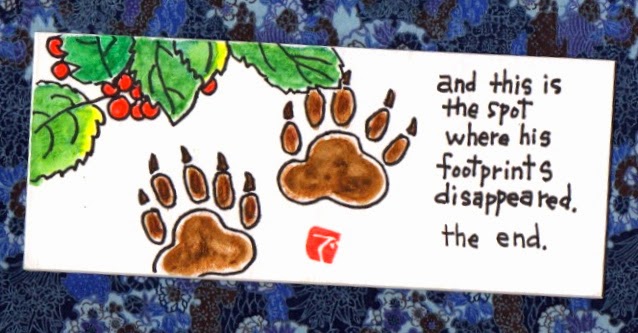 Posted by dosankodebbie at 1:01 AM 8 comments: 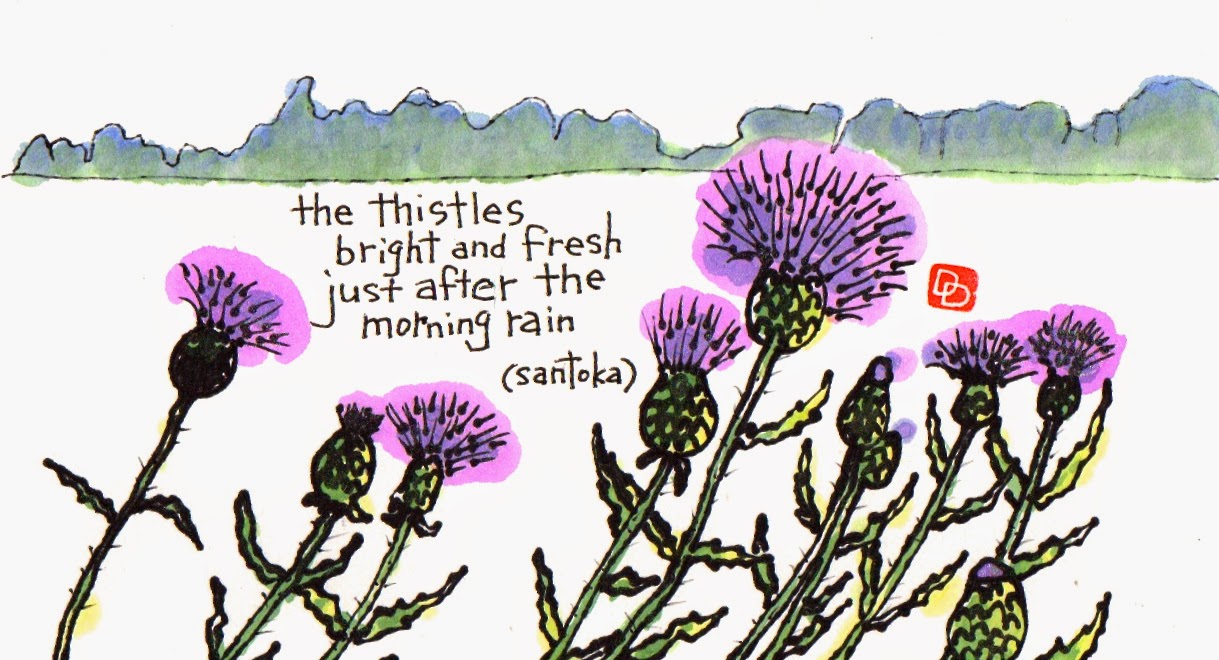 The haiku poet Taneda Santoka inspires many of my etegami, but in this case my main inspiration came from a photo taken by my middle sister, whom I haven't seen in more than thirteen years. (sigh)

Posted by dosankodebbie at 7:39 PM 4 comments: