the wind hums and listens 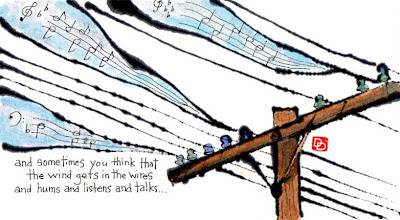 You never know where a source of inspiration lurks, or from where it will COME OUT and GRAB you (this is where you jump out of your seat). You may remember the illustrated recipe I did recently that was inspired by Maurice Sendak's immortal Where the Wild Things Are. The inspiration attacked me after I learned of his recent passing. Even more recently, I learned of the passing of Ray Bradbury, a much-loved science fiction writer who had poetry in his soul.

The etegami I've posted here illustrates a line from "It Came From Outer Space," a science fiction movie produced in 1953 that is special for being written by Bradbury. The line that grabbed me is in the context of the following passage from the screen play, and is spoken by a telephone repairman up high on a telephone pole in the desert of Arizona. He is explaining an odd phenomenon on the telephone wires:

"After you’ve been working out in the desert fifteen years like I have, you see a lot of things…hear a lot of things too. The sun in the sky. And the heat. All that sand out there, with the rivers and lakes that aren’t real at all. And sometimes you think that the wind gets in the wires and hums and listens and talks, just like what we’re hearing now.”

Reminder: I will be choosing the winners of the June Give-Away tomorrow, and announcing them on Sunday. Keep your eyes peeled.

Posted by dosankodebbie at 3:48 PM