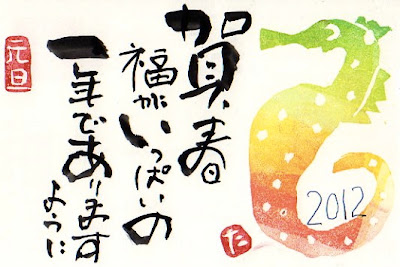 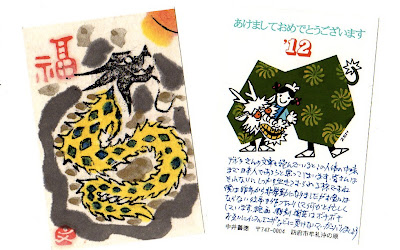 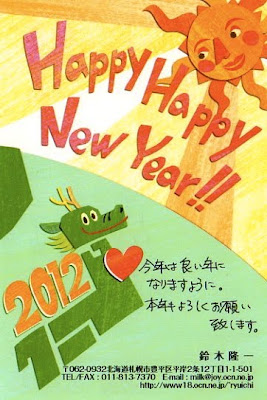 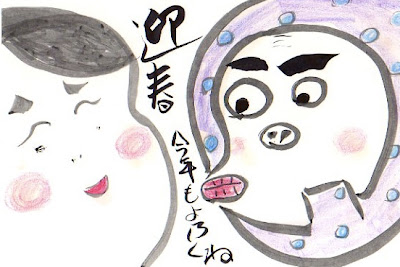 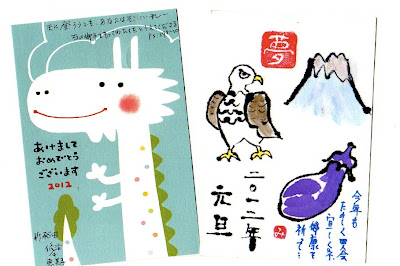 The highlight of every New Years Day is the nengajou (Japanese new year greeting postcards) that arrive sometime during the morning. People sending traditional nengajou must slip the cards through the specially-labeled nengajou slot in the mailbox before a pre-determined deadline (usually around December 24) in order to be guaranteed delivery on January 1. The cards that make the deadline arrive on New Years morning in a bundle fastened with a rubber band. At the top of the bundle is a greeting from the Japan Postal Service with their best wishes for the new year. The cards that don't make the deadline get delivered with the regular mail, after the holiday is over, and after the postal service is back to normal operation.

I just love the excitement of waiting for nengajo delivery on New Years morning! The images posted here are my favorites (so far) among the artsy cards from this year's haul. Some are hand-painted originals, others are prints made from original artwork. I expect more will trickle in after the holiday is over. Eventually, I will store them in a special nengajou card album. I refer to these albums when it's time to make next year's nengajou address list. I also refer to the album in twelve years' time when the oriental zodiac comes full circle, to get inspiration for my own etegami nengajou designs.

This year's zodiac animal is the dragon, and most of the cards I received, even the majority that were not handmade, depicted a dragon of some sort. Sea horses count as dragons, as they are called "dragon children" in Japanese. But the zodiac animal is by no means the only felicitous image for a New Year card. Mt.Fuji, a brilliant sunrise, red-crowned cranes, flying kites, the otafuku mask (as in 2nd image from the bottom) and many more images are used for nengajou.

Dearest friends and followers, May you have a blessed and joyful 2012!
Posted by dosankodebbie at 2:52 PM