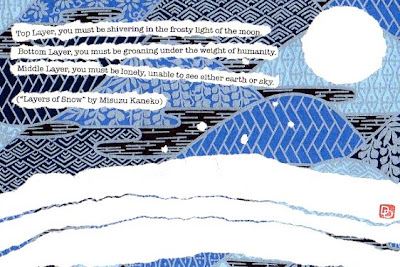 With an average yearly snowfall of 630 cm (248 inches), Sapporo has the dubious honor of being the "snowiest major city" in the world. We try to think of snow as a resource rather than a liability, but sometimes it's hard to maintain that perspective. In 1972 Sapporo hosted the Winter Olympics, the first ever held in Asia, and of course, we are famous for the Sapporo Snow Festival, which draws 2 million tourists from around the world, more than doubling the city's population of 1.9 million. Speaking of which, this year's Snow Festival starts on February 6th and goes until the 12th. Give me a shout if you plan to be here for it. I will be watching it on the TV screen in the warmth of my living room. : )

Note: The translation of the Misuzu Kaneko poem accompanying the etegami collage is my own work.
Posted by dosankodebbie at 12:00 AM