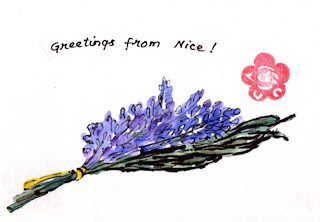 I have been exchanging mailart with Yun from France for some time now, and am impressed by how diligently she is trying to grasp the concept of traditional etegami and include it in her already rich repertoire of artistic expression. When I challenged her to draw etegami on a subject that was representative of her country, she chose the lavender of her home region of PACA (Provence, Alpes, Côte d'Azur), and particularly of Nice. She writes: "When I first visited Nice, the lavender attracted me so much. The delicate perfumed flowers that stay almost the same a year after. The souvenir boutiques sell them in small sachets, made of a typically colorful Provencal fabric."

She drew several versions of lavender etegami, including a gorgeously detailed one of a lavender sachet made of Provencal fabric. But I chose to post this simple drawing of a bouquet of dried lavender, because the irregularity of the lines and the hazy colors that spill out from the outline of the flowers seemed the most etegami-like. Yun says she drew the outline with a bamboo stick-- probably shaving it into a quill shape as I described in my post Let's Talk Quill Pens. The flower-shaped name seal is, of course, something she made herself. I have never been to the south of France, but I have no doubt that this beautiful etegami portrays some of the colors and fragrance I would encounter if I were ever lucky enough to go there.
Posted by dosankodebbie at 3:45 PM