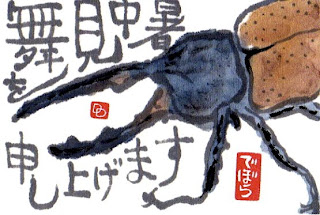 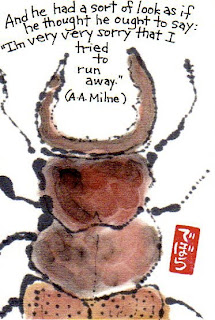 If you grow up in Japan, and especially if you are a boy (which I am not, but I have raised one, so I know), summer vacation means beetle-catching time. Though I am not fond of creepy crawlies, for some inexplicable reason, beetles are okay with me.

I think it's safe to say that the most popular beetles among children here are the kabutomushi (rhinoceros beetle) and the kuwagata (stag beetle). We have been known, however, to spend our summers trying to capture semi (cicadas), or raising suzumushi (bell crickets) from eggs for a science experiment. Unlike the normally silent rhino beetles and stag beetles, cicadas and bell crickets hum, sing, buzz, and ring like silver bells. These sounds, along with the chants of the traveling wind-chime vendor or the pet goldfish vendor, will instantly awaken long-dormant childhood memories of summer.

The etegami at the top depicts a Hercules Beetle, which is supposed to be the largest of the rhinoceros beetles. I drew it while I was experimenting with this week's Illustration Friday topic: Giant. My official IF submission ended up being the giant toad in my previous post. But I'm rather fond of this rhino beetle etegami, and I decided to use it for our 2010 summer greeting card. The accompanying words are the standard ones we use for this customary exchange: Shochuu mimai o moushi-agemasu (solicitations in the middle of summer's heat).

The second etegami depicts a stag beetle. The accompanying words are a short quote from a delightful AA Milne (of Winnie the Pooh fame) poem that I ran across the other day. I just can't resist posting the entire poem here. (I just can't!) I hope you enjoy it as much as I do.

I found a little beetle, so that beetle was his name,
And I called him Alexander and he answered just the same.
I put him in a matchbox, and I kept him all the day...

She said she didn't mean it, and I never said she did,
She said she wanted matches, and she just took off the lid
She said that she was sorry, but it's difficult to catch
An excited sort of beetle you've mistaken for a match.

She said that she was sorry, and I really mustn't mind
As there's lots and lots of beetles which she's certain we could find
If we looked about the garden for the holes where beetles hid-
And we'd get another matchbox, and write BEETLE on the lid.

We went to all the places which a beetle might be near,
And we made the sort of noises which a beetle likes to hear,
And I saw a kind of something, and I gave a sort of shout:
"A beetle-house and Alexander Beetle coming out!"

And Nanny's very sorry too, for you-know-what-she-did,
And she's writing ALEXANDER very blackly on the lid,
So Nan and me are friends, because it's difficult to catch
An excited Alexander you've mistaken for a match.

Posted by dosankodebbie at 7:53 PM