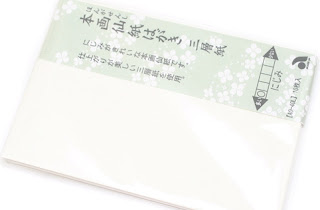 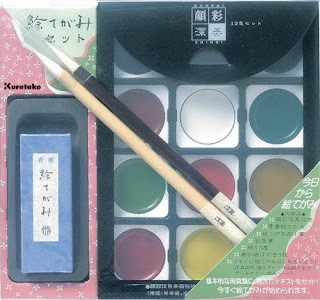 So many of you have asked for advice on where the tools and paper for etegami can be purchased. Several of you have suggested promising websites. But so far, the only cardstock I've found that is produced specifically for etegami, and that can be ordered online from the US, is on the JetPens website. Thanks, Cole for being the first to direct me to this page! Etegami cardstock is usually labeled gasenshi, wagasenshi, or hongasenshi. Packages of these cards usually come with some sort of indicator of nijimi quality (which allows ink to bleed/spread sideways).

I prefer cardstock with the highest level of nijimi. The cards shown on the JetPens website have a scale of nijimi printed on the package. The placement of the circle in the row of boxes indicates the nijimi level, and the further left that circle is, the greater the nijimi. The attached photo (top) shows the set of cards that has the highest nijimi level on the JetPens page. This would be my choice. However, cards with high nijimi can be difficult for beginners to handle, so you may want to order cards of varying nijimi levels and test them till you find the one you're most comfortable with.

The JetPens website also offers a set of gansai paints (middle photo). They call it "Akashiya watercolor paints," but the box itself says Gansai on it in Japanese characters, so I feel safe in recommending it as the same type of paints I use. I was unable to find the kind of brush pens or sumi ink I use on this site. They do have some kind of brush pens, but they seem different from the ones we use for etegami.

I've ordered several etegami sets from Amazon JP, just to test them, and I like one well enough to recommend to you, but Amazon JP will not ship the item (see bottom photo) to overseas addresses. It comes with everything you need to start etegami, including a brush pen for outlines, a different kind of brush pen for coloring, an ink stick for making sumi ink, and a booklet introducing the art of etegami (in Japanese, with lots of pictures). The only complaint I have about this set is that the sample postcards included with it do not have much nijimi.

I emailed Kuretake (JP), the company that makes this etegami set, asking for leads to online shops. They kindly responded almost immediately, but could only give me the names and numbers of one US-based art supply store and one UK-based art supply store which carry Kuretake products. If you live within the telephone area code of the following businesses, it may be worth your while to call them. You can also contact them by email. Apparently, Kuretake (JP) has already informed them of my search, so they should be prepared to help you.