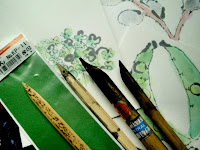 The three etegami in the background of the photo show a bunch of broccoli sprouts (excellent subject for quill pens because of the details), pea pods, and pussy willows. Maybe you can see how the blotches add, rather than detract, from the drawings.
Posted by dosankodebbie at 11:03 PM