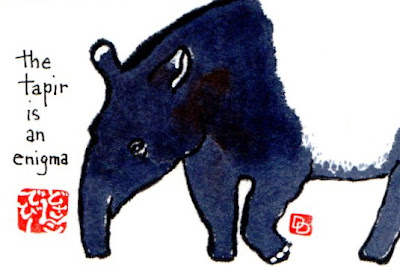 My niece was married last weekend. They met through their mutual passion for tennis, but it was a conversation she had with him about tapirs that convinced her she had found her life-long partner.

Then, almost by accident, I came across this entry in a travel book called Traveler's Tales Thailand, by Alan Rabinowitz. He quotes an unnamed traveler as saying, "[the tapir is] an enigma... a survivor of a more gentle and legendary time ... wandering in unique isolation in a world not yet mature enough for its wisdom."

Did you know that the tapir is named after a creature in Chinese mythology? In Japanese folklore, the tapir (known as baku) eats people's dreams, especially nightmares. In fact, I grew up believing that the tapir was a dream-eating mythological beast, and only recently realized it was (also) a real live creature.

Posted by dosankodebbie at 10:19 PM