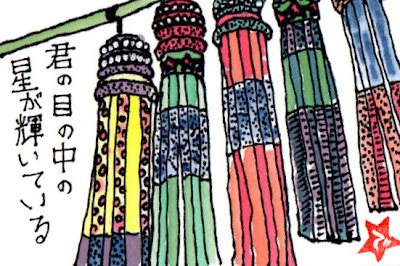 Japan traditionally celebrates the Tanabata festival (sometimes referred to as the Star festival) each year on July 7. This festival honors the legend of the star-crossed lovers Hikoboshi (the star known as Alter) and Orihime (the star known as Vega) who can meet only once a year from opposite banks of the The River of Heaven (the Milky Way).  Although the specifics vary from region to region, and some of the northern regions (like ours) wait until August 7, the celebration always involves large or small branches of bamboo hung with pretty-- often symbolic-- paper decorations, and rectangular strips of paper on which children write down their wishes. This is illustrated in the etegami to the right. The Japanese words say: "One night's dream."

The etegami at the top of this post shows a type of ornament for which the Sendai Tanabata Festival in northeastern Japan is famous. These are huge, colorful, ball-topped streamers that are suspended from either horizontal or vertical poles-- rows and rows of them hanging high above the heads of the festival goers. It is an awesome sight. The writing says "The stars in your eyes are sparkling."
Posted by dosankodebbie at 12:47 AM