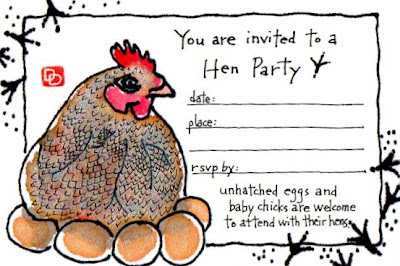 One of the Red Bubble groups I belong to is doing an Invitation Card Challenge. I was struck by the fact that I'd never done an etegami invitation card! In fact, the only invitation card I can remember ever making is a Hen Party invitation printed from a lino block carving. And that was decades ago.  At the time, having a small baby made it difficult to get together with friends. So I decided to invite them (with their babies if they had any) to socialize at my apartment.

For the invitation card challenge, I made the etegami posted here, and then tested it on the members of my Etegami Fun Club group on Facebook. The image itself passed muster, but many of the responders told me they understood "hen party" to mean a bachelorette party, which made the phrase "baby chicks are welcome" seem out of place. I checked the dictionary definition of hen party and it says "a social gathering restricted to women," but bachelorette party seems to be the most commonly listed interpretation. I guess common usage has changed over the generations. What do you think?

UPDATE: Guess what? This card won the Invitation Card Challenge I submitted it to. Yaaaaay!