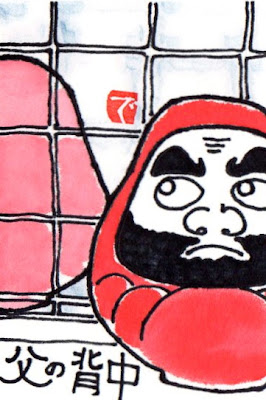 There was a time, not very long ago, when Japan's hard-working lower and middle classes loved to quote, and certainly believed in, the expression kodomo wa chichioya no senaka o mite sodatsu (a child grows into adulthood by watching his/her father's back).  The idea is that a child learns a great deal about life, responsibility, honor, and well...basically all the virtues of responsible adulthood, from watching the back of his/her father, even if they rarely spend time with him face to face. Watching the back of a father who lacked those virtues is also, for better or for worse, an education.

I myself grew up in the days up to and including Japan's phenomenal economic growth of the mid-to-late 1900s. My friends rarely saw their fathers, who worked from early to late each day, and "weekend" was only a vague, foreign concept. But, both literally and figuratively, the children watched their fathers' backs, and from these backs they learned many of life's lessons.

Young parents of 21st century Japan, for the most part, believe in fathers being more actively involved in raising the kids, and (partly as a result of the burst of the economic bubble) the workplace is no longer the center of their lives. The above-mentioned expression continues to be quoted, however, as a reminder that the children are always watching... and learning.
Posted by dosankodebbie at 6:10 PM