the four scariest things in life 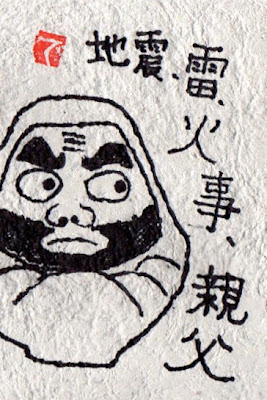 Here's another daruma doll etegami for you from my Father's Day series. The hand-made card, made from recycled papers, is stiff and bumpy, and repels the inks and colors I usually use for etegami. So I drew the simple image and the words with a black permanent marker.

The writing quotes an old Japanese expression: Jishin, Kaminari, Kaji, Oyaji (Earthquake, Lightning, Fire, and Dad), a list of four of the most terrifying things in life. I first heard it as a child when it was used as the title of a TV drama featuring a fiercely despotic father. Very recently, I was rooting through some linguistic archives on the internet, and I discovered that the word oyaji, as used in this particular expression, is not the word oyaji that means "Dad," but is rather a mutated form of Oo-yama-ji (big-mountain-storm), which used to be another word for Typhoon!  I asked my Japanese friends if they were aware of the original meaning of this once-common expression, and even the oldest among them had never doubted the oyaji = dad interpretation. Probably because they all grew up in an age when "Dad" really did belong on a list of life's most terrifying things.

For those who haven't been following my blog long enough to understand what the daruma dolls represent, or why I find them fascinating, you can catch up a bit by reading one of my earliest Daruma posts. (click here)

Posted by dosankodebbie at 11:28 PM