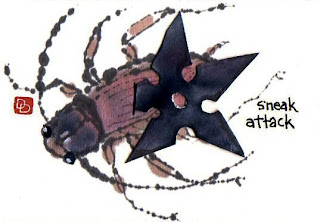 As soon as I heard what the new IF prompt was, my mind leaped to cockroaches. The funny thing is-- as far as I know-- we don't have cockroaches in Hokkaido. I guess it's too cold here.

The first time I saw a cockroach in Japan was in Nagoya, when I was in my mid-twenties. Of course I've always known, from reading books and hearing stories, that humans generally consider them disgusting, filthy, sneaky, and almost impossible to get rid of. Should I risk grossing you (my darling followers) out with an etegami depicting a cockroach? Sure, why not?

On the other hand, I googled definitions for "sneaky," and one string of synonymous terms I came across was: furtive: marked by quiet and caution and secrecy; taking pains to avoid being observed; "a furtive manner"; "a sneak attack"; "stealthy footsteps"--> That sounds just like NINJA to me. Doesn't it to you?

Anyway... I solved my dilemma by combining the two mental connections I'd made. So, here it is.

Posted by dosankodebbie at 11:10 PM