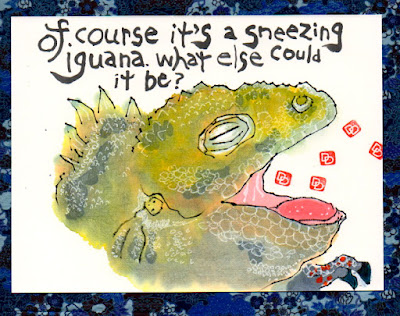 Last month I googled "how many times do I have to sneeze in a row before it kills me?" I'd been sneezing so much, I was starting to suspect I'd be dead by now if it weren't for my cardiac pacemaker. But I guess that isn't so.

I did learn that the longest human sneezing spree on record is 978 days, and that iguanas sneeze more often and more productively than any other animal.

So today I became inspired to paint  a sneezing iguana. (I know I know, it looks more like it's singing opera.) Yes, I am still sneezing. But not everyday, and not all day. Must be the change of seasons. Recently acquired allergies. Dry air. Or maybe I'm part iguana.

Posted by dosankodebbie at 5:25 PM