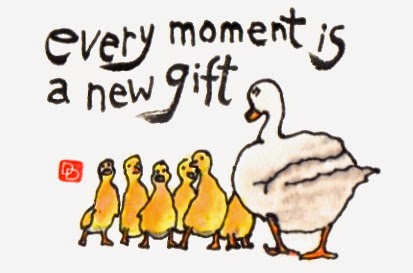 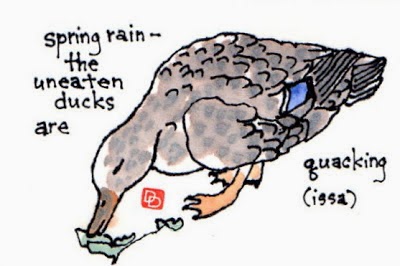 I'm no expert on ducks or anything, but when I think of the ducks on Old MacDonald's farm, I think of the big white duck and ducklings in the etegami at the top. I've never seen ducks like that on a Japanese farm. The ducks I've seen on Japanese farms are like the smaller, brown kind depicted in the second etegami, and are often kept by rice farmers to eat the bugs in the rice paddies. They are released into the paddies when both the ducks and the rice plants are young, and they grow up together. By the time the paddies are drained and rice harvest season arrives, the ducks, too, are big enough to eat. The big white ducks are called ahiru in Japanese, and the brown ducks are called aigamo. The common word for duck (kamo or gamo) doesn't apply to the white duck. This has always puzzled me. Anyone out there have an explanation for this?

Posted by dosankodebbie at 3:25 PM