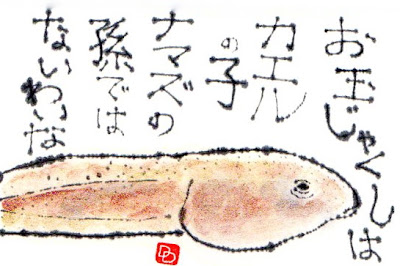 The new Illustration Friday prompt is "heights," but oddly enough, the first thing the word brought to my mind was tadpoles. I think I was remembering a mysterious incident reported on the news last spring about tadpoles falling from the sky. There were all kinds of theories, of course, but I am satisfied with the theory that they fell from a bird's mouth (a pelican, maybe) that happened to be flying overhead. Well, once my mind got hold of the idea of tadpoles, I had to get it out of my system before I could go on to paint something more appropriate to the prompt. So I present you with my first tadpole etegami of the season. I painted it with my brand-new, sparkly "metallic" gansai paints, but you can't tell it from the scanned image. Too bad. It quotes from a funny Japanese children's song about where tadpoles come from. "Tadpoles are the children of frogs, not the grandchildren of catfish..."

Posted by dosankodebbie at 9:24 PM