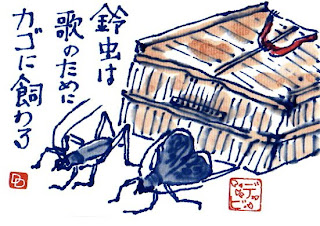 As I was in an experimental mood, I drew this etegami with a Pelikan-brand fountain pen filled with blue-black ink. I waited for the ink to dry completely before adding the gansai paint, but (as I feared it would) the fountain pen ink smeared as soon as it got wet. That's okay, though. Like I'm always saying, the best etegami is that which you don't have complete control over.
Posted by dosankodebbie at 8:56 PM