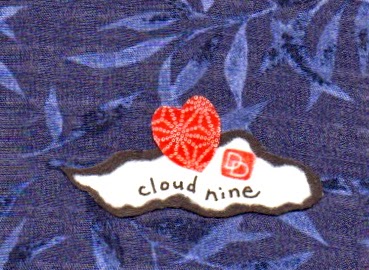 I thought I was finished with Valentine cards for this year, but I learned a lovely new poem about the heart and decided I couldn't go on to any new projects until I had expressed this short poem in etegami form. The poem is by Juukichi Yagi (1898 -1927), and it basically repeats two lines that translate roughly to: "Dear heart, go out into the world. But come back someday because this is the best place to be."

I chose the image of a heart traveling on a cloud (the Japanese version of a flying carpet), and followed the same steps described in my previous post: Scrappy Valentine Cards.  But while I was doing this, I started thinking about clouds in general, and how they are used in English expressions. And I started wondering: What does the expression "cloud nine" mean? And where did it come from? (google it yourself) This led to the English version of the scrappy etegami in the photo above.

Posted by dosankodebbie at 5:57 PM