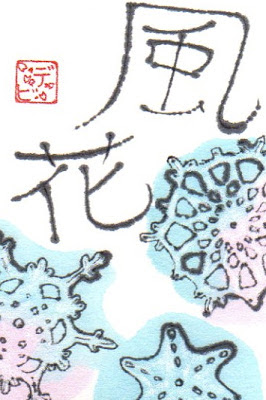 It was almost exactly a year ago that I was commissioned to make an etegami to illustrate the name of a newborn child whose parents had named her "Fuuka." This is an alternate reading for the Japanese characters which are usually read kaza-hana or kaza-bana (literally: "wind flowers"), and are a poetic reference to snowflakes that dance in the wind on a sunny day. What a lovely name for a little girl. 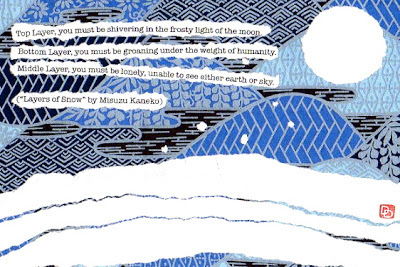 Here is another favorite snow-themed etegami of mine. This one is an etegami-collage illustrating a poem by Misuzu Kaneko (1903 – 1930), the author of many delightful poems and songs for children.

And finally, an etegami painted years ago-- my very first attempt to illustrate snow. The scanned image isn't able to catch the very pale blue of snow perched on top of some Mountain Ash berries. Snow has become a frequent model for my etegami since those early days. After all, I live in what is officially rated the snowiest major city on earth, and we are surrounded by the stuff in its many forms for 6 months of every year.
Posted by dosankodebbie at 8:02 PM