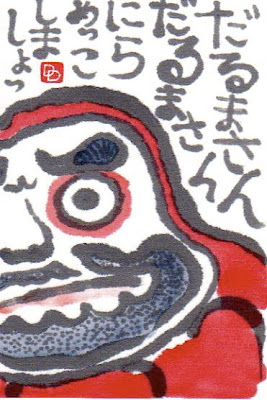 The folk craft for which Gunma prefecture is probably best known, is the Daruma, a roundish, armless, legless doll that is said to represent an ancient Buddhist hermit/priest, who meditated on a mountain for so long without moving that he lost the use of his legs. The figure is constructed by the hariko method (paper mache) common among many of Japan's regional crafts, and then painted an orangey-red.

It has a weighted base so that it rights itself no matter how often it is tipped over. The Japanese saying nanakorobi-yaoki (fall seven times and rise again eight times) is often illustrated with this type of daruma doll, and stands for the spirit of "try, try and try again."

But that's not why I picked the daruma for this post. It so happens that I recently came across the following passage in the book Band of Brothers by Stephen E. Ambrose:

Although the men lived in constant danger-- a direct hit from the railway gun would destroy whole buildings-- they were in a sense spectators of war. Glenn Gray (author of The Warriors: Reflections on Men in Battle ) writes that the "secret attractions of war" are "the delight in destruction." He continues, "War as a spectacle, as something to see, ought never to be underestimated." Gray reminds us that the human eye is lustful; it craves the novel, the unusual, the spectacular.

When I read this, something clicked. I thought of how I had been glued to the TV news after the initial quake and tsunami, watching the dramatic, tragic, video footage they were broadcasting over and over and over again. I knew that other people all over the world were doing the same. It made me wonder what this revealed about us. Did it reveal a common bond of horrified sympathy and desperate, but helpless, desire to save the victims? Or a common sense of relief that we were watching the disaster from a distance? Probably both. I also know, that being so close to these events, I was looking for information to apply to my own safety. And... maybe some other things too. Like a craving for "the novel, the unusual, the spectacular." It is well expressed as the "lust of the eyes." (cf. 1 John 2:16)

It was the eye connection that brought the daruma to mind. Gunma darumas are sold with blank eyes. The buyer is supposed to fill in one eye at the time he makes a particular request of the gods. When the wish is granted, he fills in the other eye. Politicians running for office often turn this into a media event.

The Japanese words on today's etegami are from a song that is sung to accompany a child's game where one tries to stare down an opponent. Daruma, daruma, let's play the staring game! The first one to look away, or to burst out laughing, loses.
Posted by dosankodebbie at 4:53 AM

Email ThisBlogThis!Share to TwitterShare to FacebookShare to Pinterest
Labels: band of brothers, daruma, earthquake, gunma, lust of the eyes