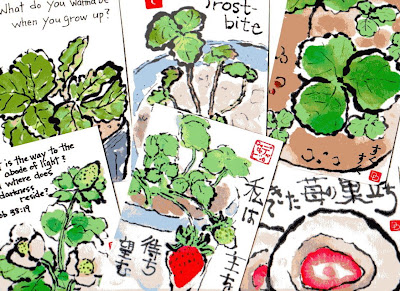 Four months ago, even before our long winter was over, a strawberry seedling was delivered to my door. It was my first hesitant step toward raising something edible in my garden. I decided to keep an etegami diary of the plant's growth, and recorded the six main stages that I was able to observe. I drew it on the first day it arrived, in its tiny vinyl cup. A few weeks later, I moved it into a large planter and set it outdoors. But then the temperature plummeted and it snowed off and on for many days. I thought I had lost my strawberry plant. It was looking spindly, and the leaves were orange and brown-tinged. It turned out that the earliest leaves were just naturally withering away, and the leaves that replaced the first growth were lush and vigorous. A little later, pretty white blossoms appeared, followed by hard knobby green fruit. More waiting, and the fruit grew plump and red and ready to be picked. On the final day of my diary, I picked the fruit and used it in making ichigo-daifuku, an-filled (sweet bean jam) dumplings made of glutenous mochi rice, with my freshly picked strawberries in the center of each dumpling. My strawberry plant had fulfilled her destiny. And my strawberry diary had come to its end. Why don't you give it a try too? Record the growth of something dear to you with etegami.
Posted by dosankodebbie at 9:12 PM